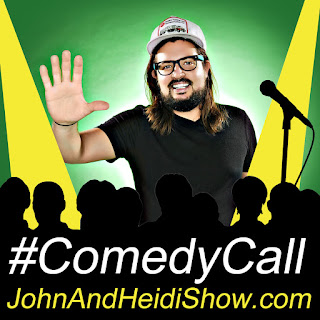 Today we visit with funnyman Dusty Slay. His comedy is largely focused on his childhood in the trailer park, his adult years in the workforce and as an occasional blackout drunk. He recently signed a development deal with ABC for a half-hour comedy show.
More info at www.DustySlay.com
www.Facebook.com/DustySlayComedy
www.Twitter.com/DustySlay
www.Instagram.com/DustySlay

A study by the University of Warwick found that new parents don’t get full nights of sleep for 6 years. (https://bit.ly/2EyfCq8)
BRAIN ON DRUGS:
Brought to you by TimeForRehab.com! Each day we talk about people doing dumb things under the influence, but addiction is no laughing matter… if you or someone you know needs help, we're here to help! You can learn more at TimeForRehab.com.

Portage County Common Pleas Judge Becky Doherty admitted to officers she was “absolutely out of her mind” when busted Sunday for allegedly drinking while driving in Brimfield, Ohio. 55-year-old Doherty was arrested around 9:15 p.m. after she reportedly drove an SUV off an icy ramp and crashed into a ditch. Officers placed the judge in the back of a police cruiser, leaving her cellphone in a pile of vomit on the side of the road. Police said Doherty refused to take a Breathalyzer test or complete a field sobriety test. She was booked at Brimfield Police Station with operating a vehicle under the influence. Authorities said that several times she requested police contact Portage County Sheriff’s Major Larry Limbert. After she became increasingly loud and refused to sit down, an officer locked Doherty in a jail cell. (https://nyp.st/2IgVjRL)
BIG SCREEN-LITTLE SCREEN: Brought to you by ChannelSurferTV.com

A cast member is accusing Lindsay Lohan of doing drugs during the filming of “Lindsay Lohan’s Beach House.” (http://goo.gl/m799na)

“Singin in the Rain” director Stanley Donen, the last survivor of Hollywood’s Golden age, has passed away at the age of 94. (http://goo.gl/XxNzZt)

SCOOP OF THE DAY: Brought to you by BetterCreditCards.net
Dollie Parton revealed that she once whipped out a pistol on a man who confused her with a prostitute. Dollie told an interviewer that she’s not in line with #MeToo feminism because she has inappropriately hit on men at times.
(https://bit.ly/2SoU2YO)

An Australian woman found a python in her slippers after she put them on at the end of a 9,300 mile flight from Scotland. (https://bit.ly/2Xk6P2g)

Khloe Kardashian and Kylie Jenner say they are not taking calls from Jordyn Woods, who was Kylie’s best friend before she hooked up with Tristan Thompson. (http://goo.gl/wrFevX)According to authorities, a Florida police officer has been suspended without pay for letting a pair of suspects get hot and heavy in the back of his patrol car last summer. An internal investigation into the romantic cruiser ride kicked off in July 2018, shortly after Fort Pierce Police Officer Doug McNeal took 23-year-old Zachery Moellendick and 24-year-old Krista Leigh into custody for shoplifting at a Walmart. A search of the pair turned up stolen jewelry and a baby toy, so the officer arrested them and escorted the pair to his vehicle. Leigh was cuffed and placed inside the patrol car but Moellendick, who had been using crutches to help him walk at the time, was never restrained. During their drive to St Lucie County jail, video shows the pair “holding each other, cuddling and kissing” while the Barry White song, “Can’t Get Enough of Your Love” plays in the background. An investigation into the incident concluded McNeal violated a total of nine policies and he was suspended for twenty days without pay as a result.
(https://nydn.us/2Xp4S4w)

FUN FACT FOR YOU:
Share this with your friends... they'll think you're really smart!
Australia Is Larger Than Pluto. You’d think a celestial body would be bigger than any country on Earth (even if that country is also a continent). But it turns out that’s not the case. Pluto measures 2,370 km across, compared to Australia’s 4,000-km diameter.

WEIRD NEWS: Brought to you by WeirdGiftOfTheDay.com
A Florida woman is accused of attacking her boyfriend with a selfie stick. The Pasco County Sheriff's Office arrested 43-year-old Larita Branch on a felony battery charge. Deputies said when she got into an argument with her live-in boyfriend, she hurled two speakers at him before whacking him on the neck and head with a selfie stick. According to the arrest report, deputies found scrapes, blood, and a large red mark on the man's arm, and multiple scrapes and red marks on his head and neck. Investigators said Branch has been arrested and convicted before on similar charges. (https://bit.ly/2U8uWPo)
MOMENT OF DUH: Brought to you by FunkyMonkeyShirts.com

Florida Cops report that an ex-con is back behind bars after allegedly striking his girlfriend in the forehead with a “hard piece of cookie.” 41-year-old Wade Smith was arrested yesterday on a misdemeanor charge following the alleged battery in the couple’s residence in Zephyrhills, a Tampa suburb. According to a criminal complaint, the victim told cops that Smith “threw a hard piece of cookie and hit her in the forehead.” Smith reportedly “admitted to throwing the cookie at the victim without her consent.” Police noted that the woman had a red mark on her forehead, but suffered no further injuries. Smith, locked up in the Pasco County jail in advance of a court appearance today, has a lengthy rap sheet that includes convictions for grand theft, trafficking stolen property, fraud, and weapons possession. (https://bit.ly/2GZYKtT)
THESE THREE THINGS!
GOOD NEWS: Brought to you by www.RadioTravelGroup.com

In Preparation for 10-Hour Flight, Thoughtful Mom Hands Out Goodie Bags on Behalf of Her 4-Month-old
https://www.goodnewsnetwork.org/thoughtful-mom-hands-out-goodie-bags-to-plane-passengers-on-behalf-of-her-4-month-old/Awesome story! Please feel free to share YOUR good News too!
Also, consider joining John & Heidi at 80s In The Desert on
May 3rd & 4th in Las Vegas – www.RadioTravelGroup.com
(Use promo code RADIO to save $25 per ticket)