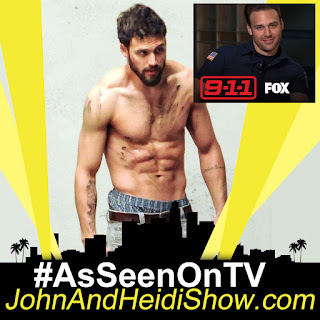 Today we visit with Ryan Anthony Guzman, American actor, model, and mixed martial arts fighter. Shortly after becoming an actor he landed his big break and was cast as the lead in the highest grossing film dance franchise to date. He portrayed Sean Asa in the Step Up series, Noah Sandborn in The Boy Next Door, Carlos Gutierrez in the mini-series Heroes Reborn and Roper in Richard Linklater's Everybody Wants Some!!. He's now starring in Fox TV's first responder drama series 9-1-1, playing LAFD firefighter Eddie Diaz.
LEARN MORE HERE - https://www.imdb.com/name/nm4554428/

A study by driving-tests.org has found that the car theft industry is costing auto drivers and insurers $6 billion a year. The study found that older Honda Civics are the most likely to be stolen but thieves have more recently taken a liking to Nissan Altimas. Alaska experienced a 40-percent rise in car thefts over the past year. The study used data from the National Highway Traffic Safety Administration, the FBI and the National Insurance Crime Bureau.
BRAIN ON DRUGS:
Brought to you by TimeForRehab.com! Each day we talk about people doing dumb things under the influence, but addiction is no laughing matter… if you or someone you know needs help, we're here to help! You can learn more at TimeForRehab.com.

A New Hampshire man is facing an impaired driving charge after police say he fled the scene of an early morning crash in Concord and was later found driving down the street with no front bumper and only two wheels. According to New Hampshire State Police, officers responding to a reported motor vehicle accident on Loudon Road about 12:30 a.m. began searching for a driver who had fled the scene of the crash. 35-year-old Benjamin Gray of Concord was arrested after officers intercepted the vehicle on Route 103, where it came to stop on the front lawn of a residence with no front bumper and only two remaining wheels. Gray was released on personal recognizance and is expected to be arraigned in Hillsborough District Court on charges of driving while under the influence and conduct after a motor vehicle accident. (https://bit.ly/2THztMK)
BIG SCREEN-LITTLE SCREEN: Brought to you by ChannelSurferTV.com

Director Tim Burton is making the media rounds this week to promote his remake of “DUMBO,” which comes out on Friday. For those of you not familiar, DUMBO was an elephant who could fly because of its giant ears. https://goo.gl/rnpduS

The cast of Fuller House vowed to stand by Lori Laughlin during the Kids Choice Awards. https://goo.gl/a6c4o5

The Director of the Elton John biopic, Rocketman, says he did not cut a nude scene from the movie. https://goo.gl/9wKVjB

SCOOP OF THE DAY: Brought to you by BetterCreditCards.net
The Department of Homeland Security is reporting that a Caravan of 1,200 migrants has departed Central America for the U.S. Border. https://goo.gl/X1xsSu

Norwegian officials have spotted a sunken ship off the coast of Oslo. https://goo.gl/DPgLbG

Reynolds Wrap has unveiled a hunger harness that straps to your chest to hold your food while you’re watching March Madness. https://bit.ly/2UeOSU4

Rolling Stone writer Matt Taibbi says the damage done to the media’s credibility by Russia Gate will prove to be this generation’s “weapons of mass destruction” claim that was made before the Iraq war. (https://bit.ly/2uoLxDp)

A group of scientists have developed a GOOGLE BRAIN IMPLANT that can supercharge your IQ. https://goo.gl/jRw1vU

An angry ex-employee drove his car through the front of a Los Angeles Gym.
https://goo.gl/MpQZu9

A South Carolina School bus driver who crashed into a house said he was swerving to avoid squirrels. https://goo.gl/W1vkHG

Dr. Dre posted on Instagram that his daughter got into USC on her own and it was later revealed that he donated $70 million to the school six years before she applied. https://goo.gl/8bWKDC

Dr. Dre has since deleted the post about his daughter getting into USC on her own. Fans pointed out that Dre did donate $70 million dollars back in 2013 to create an Academy for the Arts. (http://goo.gl/TCdMuH)FUN FACT FOR YOU:
Share this with your friends... they'll think you're really smart!
The FDA Allows Up to 60 Bugs in 100 Grams of Broccoli. While food producers would like to limit the number of pests and other gross stuff that ends up in their products to zero, the reality is that some nasty stuff gets in there, and the Food and Drug Administration gives a little flexibility on gross things. For example, up to 60 aphids, thirps, or mites from the broccoli field are allowed into 100 grams of broccoli sold in stores (or a little more than 200 in the standard 12-ounce bag of frozen florets).

WEIRD NEWS: Brought to you by WeirdGiftOfTheDay.com
Police report that the owner of a Florida pizzeria was pelted with multiple slices of pizza thrown by a female patron who was “unsatisfied with the service” at the victim’s eatery. Responding to a 9-1-1 call Friday afternoon, cops found Fatos Cala, the 44-year-old proprietor of Olivia’s Pizza, with his “chest area and head...covered in tomato sauce.” On the floor of the New Port Richey pizza place were “several slices of cheese pizza.” A subsequent investigation determined that the pizza slices that struk Cala were thrown by Syeda Saleem, a 28-year-old who lives about six miles from the pizzeria. Saleem, who was in the restaurant with her son, “admitted to throwing the pizza at the victim because she was unsatisfied with the service.” Saleem had left the pizzeria before police arrived, but Cala had copied down her license plate number, which led police to her residence. She was arrested on a misdemeanor battery charge and booked into the Pasco County jail. (https://bit.ly/2FAkoUt)
MOMENT OF DUH: Brought to you by FunkyMonkeyShirts.com

Michael Walters, 52, who was arrested in Glendale, Arizona after he stole money from a youth baseball team and then robbed a bank to cover it up. Police say Walters stole $6500 from the AAU Travel Baseball team he coached in Manchester, Arizona. They initially opened an investigation because he lacked the funds to pay the winner of a fundraising raffle. He arrived at the police station a day later and said he had just come into a large sum of money. The cops were already investigating a bank robbery that occurred one town over that morning. They linked Walters’ money to the bank and he was arrested on the spot. https://goo.gl/rYKyRp

What do these 3 things have in common:
JUPITER—MERCURY—APOLLO
(Roman Gods)