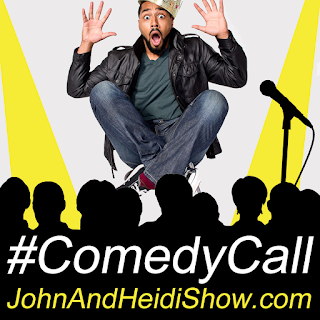 It's another #ComedyCall
Today we visit with funnyman Tone Bell, currently starring in CBS’ hit comedy “FAM” which premiered in January. He also stars in the upcoming Universal film LITTLE releasing April 12. We'll talk about his first one hour SHOWTIME stand-up special, “TONE BELL: CAN’T CANCEL THIS,” premiered in February. Here is a link to a first look of the special - https://www.youtube.com/watch?v=f_DLfbIsu7I&feature=youtu.be

A study by the University of Birmingham found that spending twenty minutes in a park of green space will boost a person’s happiness. (https://bit.ly/2GXmFej)
BRAIN ON DRUGS:
Brought to you by TimeForRehab.com! Each day we talk about people doing dumb things under the influence, but addiction is no laughing matter… if you or someone you know needs help, we're here to help! You can learn more at TimeForRehab.com.

Officials say that a Colorado teacher was busted for allegedly driving drunk when she pulled into a middle school parking lot. 32-year-old Jessica Lynn Brady faces charges after police say she hit a vehicle, left the scene of the crash, and then drove back to Altona Middle School while under the influence of alcohol. Witnesses reportedly spotted Brady crash into a vehicle around 11:30 a.m. Wednesday near Renaissance and Clover Basin Drives in Longmont. She allegedly fled the scene, but then was spotted with “glossy and watery” eyes pulling into the parking lot of the middle school. Authorities confronted the teacher whose speech “appeared to be slurred.” Police ordered Brady undergo field sobriety tests, which she attempted before trying to walk away from the officer. Police arrested the teacher and booked her at Boulder County Jail. Charges were filed against her for hit-and-run, driving under the influence, and careless driving. (https://nyp.st/2VkXVQc)
BIG SCREEN-LITTLE SCREEN: Brought to you by ChannelSurferTV.com

Sylvester Stallone has announced a release date for the final edition of “Rambo.” (https://bit.ly/2EyWln5)

Sofia Vergara took her son’s dog to lunch with her at an upscale restaurant in Beverly Hills. (https://dailym.ai/2EM9Zo4)

North Carolina Police shot and killed a sword wielding man who leapt out of a burning home. (https://bit.ly/2TweHie)

In Georgia, a 13-foot, 700-pound alligator was found in an irrigation ditch.
Georgia officials have captured a 13-foot alligator that weighed over 700 pounds. (https://on-ajc.com/2tQ8dfm)

Prince Harry and Meghan Markle had a public date night in London in which they watched a Tina Turner Musical. (https://dailym.ai/2XC8Abq)

Stormy Daniels is embarking on a standup comedy tour in which she will detail her relationship with the President. (https://bit.ly/2Tct4c5)Philippine authorities captured 1,500 live exotic turtles that were stuffed inside someone’s luggage at the Manila airport. The man who carried them is facing up to two years in prison. (https://bit.ly/2EKYihI)
BBC Radio has dropped Michael Jackson’s songs after a new documentary detailed the child sex charges against the pop star. (https://dailym.ai/2TeseM0)FUN FACT FOR YOU:
Share this with your friends... they'll think you're really smart!
There’s a Mental Phenomenon That Causes You to See Monsters in Mirrors. Called the Troxler Effect, and discovered as long ago as 1804, it causes those who experience it to think they see something fearsome in the mirror just on the periphery of their vision.

WEIRD NEWS: Brought to you by WeirdGiftOfTheDay.com
According to an arrest report, an Orange County, Florida man is under arrest after allegedly throwing Molotov cocktails at his own vehicle inside of an impound lot. Car lot owner Darnell Adams said, “He came back and started throwing gas cocktail bombs over the fence on his own car.” An arrest report says the suspect, Ayub Abdulrahman, came to get his car back after it was impounded and set it on fire instead. The state fire marshal is now investigating what happened at the impound lot. Adams said he was going to hand over the keys because Abdulrahman had already paid almost $300 to get his car out of the impound lot, but instead of it going home, the burned-out car was stuck behind crime scene tape. Adams said he was bringing Abdulrahman his keys when surveillance cameras caught him throwing several firebombs at the vehicle. He added that he was coming around the corner with the keys and saw Abdulrahman running away. He chased after him until deputies made an arrest.
(https://on-ajc.com/2C4kj9r)
MOMENT OF DUH: Brought to you by FunkyMonkeyShirts.com

Prosecutors say that a New Jersey man is accused of a donation scam in which he impersonated a police officer, firefighter, and others in order to collect funds that he ultimately kept for himself. 55-year-old Anthony Moats was arrested and charged Wednesday, with impersonation, theft by deception, and impersonation of a law enforcement officer for soliciting donations from local businesses on behalf of various nonprofits and government agencies including police, veteran and firefighter foundations, as well as other organizations. According to the prosecutor’s office, Moats used the money collected in the scam for his own benefit, including paying for rent and bills. He was arrested when he was allegedly picking up a donation. (https://bit.ly/2XCzOyv)
THESE THREE THINGS!
GOOD NEWS: Brought to you by www.RadioTravelGroup.com
Mechanicsburg HS wrestler steps in to sing National Anthem
ahead of match https://local12.com/news