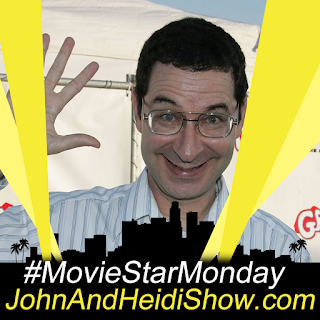 It's a #MovieStarMonday with Eddie Deezen! He was Eugene in the giant blockbuster musical Grease in 1978, Grease 2 in 1982. He is also credited as the world very first computer nerd in War Games in 1983, plus many voice projects including Polar Express and many more! LEARN MORE ABOUT EDDIE HERE - https://www.imdb.com/name/nm0214430/

A Harris Poll found that half of young Americans want to live in a socialist nation. (https://bit.ly/2Cg6HrC)

A North Carolina man who was charged with driving while impaired asked an officer to share a bottle of Fireball Whiskey that had been confiscated during an earlier stop. 33-year-old Kyle Ryan Elliot was charged with driving while impaired, failure to maintain lane control, failure to stop at appropriate marked stop, and failure to comply with license restrictions and a DMV address change violation. Elliott reportedly had glassy eyes and the smell of alcohol on his breath. After getting two positive indications of alcohol from a breathalyzer and completing field sobriety tests, Elliott was taken into custody. As he was being placed into the back of the patrol car, he saw a bottle of Fireball Whiskey in the front floorboard of the car that had been confiscated during a previous arrest. He told the officer, “You could have shared, I’m already drunk.” (https://bit.ly/2IZMZWP)

CBS says “The Big Bang Theory” comes to a close with its series finale on May 16. A one-hour episode will wrap the sitcom's 12th and final season. The network announced in August that the show's current season would be its last.
SCOOP OF THE DAY: Brought to you by BetterCreditCards.net
The second crash of a Boeing 737 MAX 8 in recent months has prompted 22 airline carriers to ground the planes. The crashes have killed some 346 people. Investigators have recovered the flight data recorder and the cockpit voice recorder from an Ethiopian Airlines crash on Sunday and are trying to determine the cause. Officials say some circumstances of the crash were similar to a Lion Air 737 Max crash in Indonesia last October. American Airlines and Southwest Airlines are among U.S.-based carriers that continue to operate MAX 8s.
Over a dozen European countries have now grounded the Boeing 737 Max Jet after it was involved in two fatal crashes in its first five months. (https://bit.ly/2Ck3yaf)

A Malaysian bound plane made a u-turn and flew back to Saudi Arabia after a mom forgot her infant daughter at the airport. (https://nyp.st/2TKluET)

Are you reading this from he comfort of a jail cell? I hope not. Yesterday was St. Patrick’s Day... notoriously one of the biggest drinking holidays of the year. In cities across the US, streets are lined with parade-goers as bars fill with green-laden patrons ready for a day of booze and fun.
But, of course, some people overdo it. St. Patrick’s Day wouldn’t be itself without a flurry of tickets for disorderly conduct, public intoxication, and public urination.
To find out where people are behaving worst, we analyzed cities with notable celebrations and looked for spikes in the number of crime incidents on St. Patrick’s Day weekend, 2018.


Scientists say old age begins at 27 as mental powers start to decline. In fact, researchers have found that peoples’ mental abilities peak at 22 before beginning to deteriorate just five years later. The researchers say the results suggest that therapies designed to prevent or reverse age-related conditions may need to start earlier, long before people become retired.

FUN FACT FOR YOU:
Share this with your friends... they'll think you're really smart!
It’s Snowed in Downtown Los Angeles
Famous for its hot winters, Los Angeles is not totally unfamiliar with snow. In fact, in January 1949, it got a three-day snow storm; the San Fernando Valley reaped nearly a foot of the stuff—the greatest snow storm in the city’s history.

WEIRD NEWS: Brought to you by WeirdGiftOfTheDay.com
In merry ol’ England, a courier who delivered parcels wearing trousers with a hole cut from the crotch has been convicted of ten counts of indent exposure. Robert Jenner, dubbed the “Naked Carpenter,” became notorious for refusing to renovate his house with clothes on. The ex-soldier and self-styled naturist insisted his actions have never left anyone “alarmed or shocked.” but the jury disagreed after he walked through a shopping center in clear trousers. The 43-uear-old Jenner delivered parcels for nationwide courier service Hermes while he wore trousers with a hole cut out of the crotch, and was seen by a teenage girl waking through an alley while exposing himself. He claimed delivery customers found it amusing while on trial at Canterbury Crown Court, but is due to be sentenced later this week. (https://bit.ly/2O3cPbt)
MOMENT OF DUH: Brought to you by FunkyMonkeyShirts.com

A pet store in Cape Coral, Florida used surveillance cameras help arrest a regular customer who has been stealing feeder mice. 45-year-old Keven Vogenberger was arrested Monday and charged with Grand Theft. According to Cape Coral Police, staff at Discount Pets & Supplies noticed issues with their mouse inventory, as well as burnt light bulbs in packages, around three weeks ago, and installed a surveillance system. The cameras captured images of Vogenberger, who has been a regular customer at the store for three years, switching the burnt-out heating bulbs with new ones on the display shelf, and placing numerous feeder mice and rats in bags and not paying for them. This happened on at least seven different days at the store. Vogenberger turned himself into police and was booked into the Lee County Jail. (https://bit.ly/2HvUX7U)
THESE THREE THINGS!
(Use promo code RADIO to save $25 per ticket)
Newer Post Older Post Home