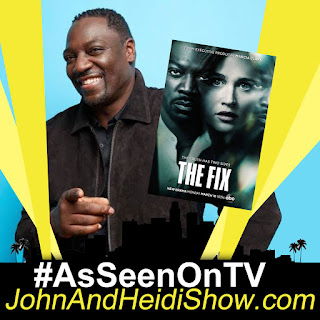 Today we visit with Adewale Akinnuoye-Agbaje. He played the iconic role of Killer Croc in the Warner Bros./DC Comics feature “Suicide Squad.” His extensive film credits include “Trumbo,” opposite Bryan Cranston; “Concussion,” opposite Will Smith and Alec Baldwin; the Sony remake of “Annie,” opposite Jamie Foxx; “Pompeii”; Marvel/Disney’s “Thor: The Dark World”; “The Inevitable Defeat of Mister & Pete”; Warner Bros.’ “Bullet to the Head”; “Killer Elite,” opposite Robert De Niro; “G.I. Joe: Rise of the Cobra” and “Faster” opposite Dwayne Johnson; “Get Rich or Die Tryin’”; “The Bourne Identity”; and “The Mummy Returns.” His TV roles include Frank Majors on NBC’s “American Odyssey,” Malko on HBO’s “Game of Thrones,” Deacon Crane on “Hunted,” Mr. Eko on ABC’s “Lost” and Simon Adebisi on “Oz.”

We will visit with him about his NEW show premiering on Monday, March 18th on ABC TV. The Fix comes from Executive Producer Marcia Clark and follows Maya Travis, an L.A. district attorney who suffers a devastating defeat after prosecuting A-list movie star Sevvy Johnson (Adewale) for double murder. With her high-profile career derailed, she flees for a quieter life in rural Washington. Eight years later, when this same star is under suspicion for another murder, Maya is lured back to the DA’s office for another chance at justice.

Adewale really delivers a stand out performance portraying his character, Sevvy. Here’s a link to one of the chilling promos that ran during The Oscars:
https://www.RelayIt.net/?c=Jsmh2zbFw45DCKtMKRDH9zbmkRLhpcz7H3kt

A survey found that sales of “safe rooms” and “emergency bunkers” have been steadily rising in the UK. (https://bit.ly/2IUqfI3)
BRAIN ON DRUGS:
Brought to you by TimeForRehab.com! Each day we talk about people doing dumb things under the influence, but addiction is no laughing matter… if you or someone you know needs help, we're here to help! You can learn more at TimeForRehab.com.

Investigators report that an Arizona woman dressed as a nun and carrying a Bible in her lap was arrested when a search of the car she was riding in with her husband turned up more than eight pounds of fentanyl. 53-year-old Esther Gomez De Aguilar and her spouse were pulled over Monday afternoon while traveling on Interstate 10. Cops say the couple’s vehicle was stopped due to “an equipment violation and moving violation.” Upon contacting the passengers, a Pinal County Sheriff’s Office deputy “noticed several suspicious circumstances” that prompted him to search the vehicle. The deputy also frisked the couple. According to police, Gomez De Aguilar’s purse contained “four bundles of suspected fentanyl pills” and she had two other bundles of fentanyl powder concealed under her clothing. A total of 8.5 pounds of fentanyl was seized during the traffic stop. She was charged with possession of narcotics for sale and transportation of narcotics for sale. (https://bit.ly/2XJ3cD6)
BIG SCREEN-LITTLE SCREEN: Brought to you by ChannelSurferTV.com

Tucker Carlson continues to get blasted on Twitter for refusing to apologize for lewd comments he made ten years ago. (https://bit.ly/2ETKqAn)

Real Housewife Felicity Huffman and Full House star Lori Loughlin were busted in a college cheating scandal in which parents paid bribes to get their kids into good colleges. (https://nyp.st/2TGSzSi)

Federal Authorities are now investigating the biggest college admissions scam ever following Tuesday’s bust of Felicity Huffman and Lori Laughlin for paying bribes to get their kids into college. (https://bit.ly/2SYroOh)SCOOP OF THE DAY: Brought to you by BetterCreditCards.net
Buzzfeed News is reporting that the U.S. government is going to begin scanning people’s faces at every airport. (https://bit.ly/2TuLtB1)

A study conducted in Greenland found that a massive solar storm that hit earth in 660 B.C. would wipe out our communications technology if it happened again.
(https://bit.ly/2Fbmjyz)

A video has gone viral of an Ohio cop using a piece of pizza to trick a runaway pig into his patrol car. (https://nyp.st/2J8zOmE)
A giant wolf that was dropped off at a Florida kill shelter has become a viral sensation after being rescued by a local sanctuary. (https://bit.ly/2F99y7E)


FUN FACT FOR YOU:
Share this with your friends... they'll think you're really smart!
A Hummingbird Weighs Less Than a Penny
Well, a certain species of hummingbird: The Cuban Bee Hummingbird, a colorful creature that is given that name because it is often mistaken for a honey bee (it is also often called a Penny Bird due to its light weight).

WEIRD NEWS: Brought to you by WeirdGiftOfTheDay.com
A Florida woman was arrested after deputies said she threatened people inside a hair salon with a machete on Monday. According to an arrest report, 43-year-old Tracy Denise George-Sirleaf was displaying erratic behaviors inside the Jean Nicole Hair Salon in Bonita Springs on Monday. Around 5:30 p.m., the report said the suspect became unhinged. Witnesses told a detective that she collected her things and went to the parking lot before returning a few minutes later and throwing herself angrily onto the glass storefront. George-Sirleaf went to her car and returned with a machete, swinging it in the air. People inside the salon called 9-1-1 as the suspect approached the business. The owner, locked in the salon, said he feared for his life as George-Sirleaf got closer with the swinging machete. After a few ignored commands, George-Sirleaf let the machete drop on the ground and stepped away. The deputy took the machete into evidence and put George-Sirleaf in handcuffs. While a detective was interviewing the victims, the suspect pooped in the patrol car. She was taken to the Lee County Jail. (https://bit.ly/2Tyn4ul)
MOMENT OF DUH: Brought to you by FunkyMonkeyShirts.com

A man is behind bars at the Allegheny County Jail after accusations that he choked another man for singing Christmas songs. It was around 9:00 a.m. Monday when a state trooper was waved down and told about a possible medical emergency. When he got to the scene, investigators say the trooper spotted a Chrysler Town and Country minivan parked on the shoulder, and two men on the other side of the guide rail. According to the criminal complaint, the victim told the trooper he was driving the minivan with his passenger, 25-year-old Clayton Lucas. The victim told the trooper Lucas reached around his seat while he was driving and began choking him. The victim told the trooper he was singing Christmas songs, so the victim said Lucas tried to choke him to make him stop singing. In the complaint, the victim went on to tell the trooper on scene that Lucas restricted the air and blood from around his neck to the point he was about to pass out. The trooper noticed the victim’s neck was red and his eyes were bloodshot. Lucas is in the Allegheny County Jail and faces multiple charges. (https://cbsloc.al/2J0kCYO)THESE THREE THINGS!
(Use promo code RADIO to save $25 per ticket)