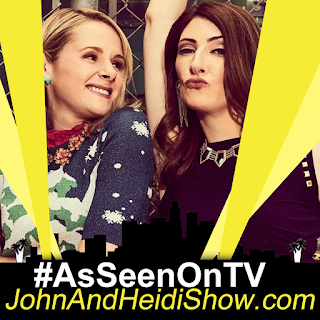 Today we visit with Katie O'Brien and Katy Colloton, the creators of TEACHERS... a funny show that airs Tuesdays 10/9CT on TV Land, the series finale will air on Tuesday March 19th. Katie and Katy not only star in the critically acclaimed show, they also co-created, write, produce, and show-run it. They are truly some incredible, funny women. Here is a link to the trailer for the final season: https://www.tvinsider.com/688554/teachers-season-3-trailer/

A study by the American College of Cardiology found that more Americans under the age of forty are having a heart attack than ever before.
(https://on.mktw.net/2VDxLIw)

BRAIN ON DRUGS:
Brought to you by TimeForRehab.com! Each day we talk about people doing dumb things under the influence, but addiction is no laughing matter… if you or someone you know needs help, we're here to help! You can learn more at TimeForRehab.com.
A bus driver has been charged with 26 counts of endangering the welfare of children and one count of DUI after leaving dozens of students stranded at a gas station. According to the news outlet, the incident happened Friday afternoon in Pennsylvania. The bus driver, identified as Lori Ann Mankos, was driving the regular bus route when she reportedly pulled into a gas station after a disturbance on the bus. She parked the bus, got out, and walked away. She allegedly handed her keys to a bus station employee before leaving the scene. Some of the students on the bus were allegedly joking about the Mankos’ driving and ultimately asked her to get off the bus. Many of the children were picked up at the gas station by their parents. Others were driven home by another bus driver who was called in by the district. Mankos was charged one count of endangering the welfare of children for each child left at the station. She was also charged with one count of DUI. (https://bit.ly/2VBidVN)

SCOOP OF THE DAY: Brought to you by BetterCreditCards.net
Chipotle has started its very own rewards program that offers customers free food. (https://bit.ly/2NYDlCU)

Florida man was arrested after he broke into a woman’s home and slept on her couch. (https://bit.ly/2SXcjwk)

A wild brawl broke out at a Chinese Buffet in New York City after two women argued over crab legs. (https://nyp.st/2Cffha9)

Bubbles, the Chimpanzee that once lived at Michael Jackson’s Neverland Ranch, is now living at a Florida animal sanctuary. Bubbles is 34 now
(https://dailym.ai/2CgaC7K)

FUN FACT FOR YOU:
Share this with your friends... they'll think you're really smart!
Without Empty Space, the World’s Atoms Could Fit Into a Grain of Salt
We are surrounded by empty space—not just between ourselves and the outside world, but between and even within our atoms. As the BBC explains, “That means even the most solid-looking objects we see are predominantly nothingness. Put another way, if you were to remove all the empty space in the atoms that make up a human being, he or she would be a lot smaller than a grain of salt.”


WEIRD NEWS: Brought to you by WeirdGiftOfTheDay.com
Deputies say that a pregnant Florida woman is accused of stabbing her boyfriend for looking at a photo of another woman on his roommate’s cell phone. Pasco County deputies said they responded to the reported stabbing at a Zephyrhills home, and later arrested 25-year-old Julitza Emily Gonzalez. According to her arrest report, the roommate, who was not identified, said he showed a photo of a woman he wanted to date to his friend. The friend looked at the photo while his pregnant girlfriend, Gonzalez, was in the room. The moment sparked an argument between the couple. As the quarreling continued, the roommate said he became uncomfortable and left the room, and the shouting escalated. At one point the roommate heard someone rummaging through the kitchen drawers. A short time after, the boyfriend ran into the roommate’s room with a stab wound to his stomach and said, “That (expletive) stabbed me!” The roommate used a shirt to apply pressure to the wound, called 9-1-1, and waited for paramedics to arrive. (https://bit.ly/2NRtbUl)

THESE THREE THINGS!
(Use promo code RADIO to save $25 per ticket)