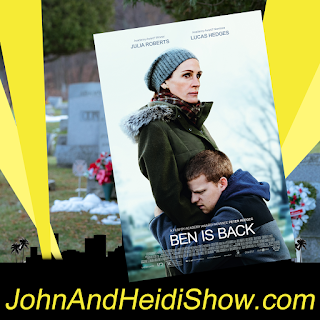 Today we visit with Hollywood Director, Peter Hedges (About a Boy, Pieces of April, and What's Eating Gilbert Grape) has a new movie “Ben is Back” starring Julia Roberts and Peter's son Lucas Hedges. Peter is the writer and director of "Ben Is Back", a project he took on as a response to his close friend dying of a drug overdose, his niece almost dying of one, and Philip Seymour Hoffman passing away in 2014. Available now from Lionsgate Home Entertainment & Roadside Attractions.

A new study found that overweight people are more likely to survive a stroke.
(https://bit.ly/2VFWZGd)

A heated disagreement about the late rapper Tupac Shakur ultimately resulted in an arrest and a hospital visit down in Florida. The fight in question went down in Clearwater last week, with local outlets reporting that it all started with a disagreement about the late icon and frequent subject of debates on legacy. Clearwater cops received multiple emergency calls alleging a battery in progress at approximately 9:45 p.m. Upon arrival at the corner of Chestnut Street and South Myrtle Ave, cops found the alleged victim—who is not named in reports—with injuries to his face including swollen eyes and large lumps. Though the person was conscious at the time, he was reportedly too drunk to relay any pertinent information to responding officers. The man was later transported to a nearby hospital and treated for a broken nose sustained during the incident. (https://bit.ly/2HeHiSB)

BIG SCREEN-LITTLE SCREEN: Brought to you by ChannelSurferTV.com
Justin Bieber revealed that he’s been struggling lately, feeling “super weird,” and is asking fans to pray for him. (http://goo.gl/Vn6Zy6)

SCOOP OF THE DAY: Brought to you by BetterCreditCards.net
Hidden Valley Salad Dressing put a 24 foot bottle of Ranch Dressing on the Las Vegas strip Sunday and allowed visitors to fill any item they wanted with ranch dressing for free. The promotion was held in honor of National Ranch Dressing Day. (https://bit.ly/2UsRt9L)

TMZ has a new poll that allows you to vote on what certain celebrities will be doing in five years. (https://bit.ly/2TvlZDs)

A new documentary about Beto O’Rourke drew rave reviews at the South By Southwest Festival in Austin, Texas. (https://bit.ly/2SZ0tSs)


IKEA is now selling its own version of the Kama Sutra that it labels as “the ultimate guide to bedroom satisfaction.” (https://dailym.ai/2Hc8mmd)

A Virginia woman won the state lottery thirty times in one day after playing the same four numbers on thirty different tickets. She’s taking home $150,000. You only need one winning ticket to get the top prize. She could have played twenty-nine other combinations. (https://bit.ly/2T0CDG6)

A Chinese entrepreneur has disappeared after accusing the country’s most powerful judge of corruption. (https://ind.pn/2CeC2ed)
A young Iranian couple have been arrested after the man proposed marriage in public. (https://fxn.ws/2TCGb5T)

Activity at a Second North Korean missile site suggests that Kim Jong-un is ramping up preparations for a missile launch. (https://dailym.ai/2TrCbpy)

A Pennsylvania man claims he discovered a VHS cassette that shows R. Kelly hooking up with underage girls. (https://pge.sx/2NURktg)

FUN FACT FOR YOU:
Share this with your friends... they'll think you're really smart!
When a Male Lion Takes Over a Tribe, He Kills All the Cubs
We may imagine lions as noble creatures, but they can be plenty brutal, too. As Livescience explains, “When male lions take over a new territory, they almost always kill the prides’ cubs, since they are not biologically related and do not want to spend energy ensuring that other lions’ genes will be passed on.” Guess they aren’t interested in being stepfathers.

Brontophobia… Fear of thunder and lightning.


WEIRD NEWS: Brought to you by WeirdGiftOfTheDay.com
A drive-thru customer enraged by the paucity of meat on his Mexican pizza stormed a Taco Bell in South Carolina and “walked into the kitchen area and began making his own food,” police report. According to cops, the suspect entered the Taco Bell in Spartanburg Wednesday afternoon complaining that “there was not enough meat on his Mexican pizza.” A store employee told cops that she “re-made the suspect’s food.” The man was equally displeased with his second pizza and demanded a refund. When told that was not possible since a manager was not on the premises, the suspect became “enraged,” declaring that he “would show the employees how to make his food the appropriate way.” The man then “walked behind the counter into the kitchen area and began making his own food.” A Taco Bell worker noted that the suspect “did not follow proper health/safety guidelines” by not wearing “protective gloves while making his food.” Police expect to retrieve video surveillance footage recorded by Taco Bell security cameras. If apprehended, the suspect faces possible misdemeanor larceny and trespass charges. (https://bit.ly/2VKNQwf)
MOMENT OF DUH: Brought to you by FunkyMonkeyShirts.com

A St. Paul mother and her daughter were upset about their wings. They hadn’t been delivered with the rest of their order. So, police say they headed to Domino’s Pizza with a handgun. By Friday morning, 59-year-old Holly Jo Robinson and her daughter 20-year-old Lakia Michaelene Robinson were booked into Ramsey County jail on suspicion of aggravated robbery and making terroristic threats. Police were called to the Domino’s just before 9:00 p.m. Thursday on a report of a customer pointing a handgun at staff. When police arrived, they were told that the Robinsons — who had already left — were upset that their wings hadn’t been delivered with their pizza to their home. An argument had ensued. It was fairly easy to find the Robinsons’ home, since the order had recently been delivered there. Police drove to the address, and — while waiting for a supervisor to arrive on scene — Holly Robinson came out of the home and began talking to officers. A loaded 9mm handgun was found in her car and she remained in jail Friday afternoon. (https://bit.ly/2ESWpy5)

THESE THREE THINGS!
Man Taught Himself to Play the Trumpet Solely So He Could Play Taps for Fallen Soldiers
https://www.goodnewsnetwork.org
Awesome story! Please feel free to share YOUR good News too!
Also, consider joining John & Heidi at 80s In The Desert on
May 3rd & 4th in Las Vegas – www.RadioTravelGroup.com
(Use promo code RADIO to save $25 per ticket)