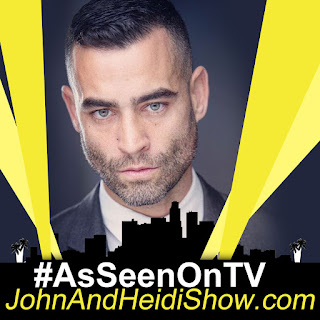 Two California Highway Patrol officers discovered a suspected drunken driver about 5:00 a.m. Sunday when he rear-ended their patrol vehicle, the agency reported on Facebook. According to the post, the officers were treated for minor injuries at a nearby hospital and released. The 22-year-old Vacaville man behind the wheel pulled over after hitting the CHP vehicle on Interstate 680 near Martinez in the Bay Area. He was cooperative but wound up being arrested on suspicion of drunken or impaired driving. The agency did not release his name. Officers wrote on Facebook, “None of us are immune to DUI/Impaired drivers on the roadways. Tragically we have lost officers in recent memory from impaired drivers. Please #neverdriveimpaired.” (https://bit.ly/2V2H3kQ)

Jenna Bush Hager revealed on “The Today Show” that she’s pregnant with her third child.(https://pge.sx/2ILaf9k)

Hollywood insiders are predicting that “The Avengers” sequel could open with $900 million at the box office.(https://bit.ly/2Dy4Or8)

Starbucks is installing needle disposal boxes in their bathrooms for users who frequent their stores. (https://bit.ly/2Dwma7M)

A video has gone viral of a man in an Easter Bunny costume brawling with two men in Florida.(https://cbsloc.al/2GwJHpx)

A Saudi woman has awoken from a coma for the first time in thirty years.
Can you imagine going into a coma in 1991 and waking up now? What’s the biggest shock? There was no internet & No cell phones. (https://bit.ly/2ZmxSex)

The U.S. Navy is investigating reports of a hidden camera being placed inside the women’s room on a ship. (https://nbcnews.to/2ULsByn)

Tesla CEO Elon Musk says a machine is coming soon that will connect the human brain to computers. (https://ind.pn/2Iw9hOY)

A North Texas pizza restaurant has been shut down after employees put laxatives in the food. They’re called Mr. Jim’s. (https://cbsloc.al/2UwOpZm)

FUN FACT FOR YOU:
Share this with your friends... they'll think you're really smart!
Birth Control for Men is a Thing.Taking birth control is not just for women. Scientists have developed an injectable contraceptive that has been found to be 96% effective in the men who used it. Using the hormones progestogen (which affects sperm production) and testosterone (which reduces the effects of the progestogen), the treatment could mean that guys would not have to use a condom again.

Eosophobia… Fear of dawn or daylight.


WEIRD NEWS: Brought to you by WeirdGiftOfTheDay.com
A self-proclaimed “saint” was arrested in a coastal Florida town Sunday after screaming obscenities and threatening to unleash an army of turtles. Authorities received multiple calls about a man who was disturbing the peace at several businesses in Indialantic, a town about 75 miles southeast of Orlando. The suspect, later identified as 61-year-old Thomas Devaney Lane, was calling himself “the saint” and allegedly said his army of turtles would “destroy everyone.” Lane accompanied a responding officer back to police headquarters where he pounded on the walls and glass before leaving the station. Officers later found him in the parking lot of a 7-Eleven where he allegedly cursed out customers and called 9-1-1. Lane allegedly told the 9-1-1 operator that the responding officer “needed to leave now or you will all be sorry you f---ed with the saint.” Police said Lane refused to exit his vehicle and was taken out by force. During that ordeal, Lane allegedly continued to shout obscenities while warning passers-by about an impending army of turtles. (https://fxn.ws/2URiwzj)

A Hampden Superior Court judge last week sentenced David Bettro of Westfield to four years in state prison for committing armed robberies in Westfield while his wife and infant daughter were in his car. In addition to three armed robbery charges, Bettro pleaded guilty on April 5th to two counts of reckless endangerment of a child and resisting arrest. 34-year-old Bettro has 198 days credit on his sentence for days spent in jail awaiting trial. Bettro was accused of robbing two Westfield businesses: The Quick Food convenience store and The Quality Inn. In both cases, Bettro threatened clerks with a firearm as his wife, Jolene Bettro, and infant daughter waited outside in their car. Using surveillance video, Westfield police traced a vehicle parked near The Quality Inn to Bettro. The case against Jolene Bettro is still pending. She is charged with the robberies and child endangerment for allegedly driving the getaway vehicle in both cases. (https://bit.ly/2VRJlAu)
THESE THREE THINGS!

What do these 3 things have in common:
KEYS—IVORY—88
(Slang for piano)