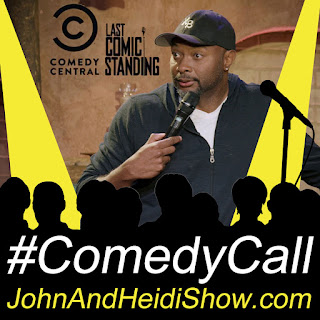 Today we have a #ComedyCall with funnyman Kevin Bozeman. He was a semi-finalist on NBC’s “Last Comic Standing” in 2015. Kevin has appeared on Comedy Central, NBC, CBS and Fox. His Dry Bar Comedy Special, "Clean & Unfiltered" has over 7 million views. More info on his page http://www.kevinbozeman.com/

A study at Imperial College in London has created a substance called Alcosynth that mimics the effects of alcohol on your brain without damaging your body. The goal is to provide the relaxing and socially lubricating qualities of alcohol without the hangovers. (https://bit.ly/2uuwmbK)

An Ohio man denied ownership of the socks on his feet after cops discovered they contained a small bag of cocaine. 20-year-old Damien Clark was driving early Saturday in Austintown, a Youngstown suburb, when he was pulled over for failing to use a turn signal. During the 3:00 a.m. traffic stop, a cop detected the smell of raw marijuana inside the 2003 Mercedes sedan and spotted loose marijuana on the car’s floor board. When an officer then searched Clark, a bag of cocaine was found inside the suspect’s left sock. Upon the discovery, Clark declared, “These aren’t my socks.” Officers subsequently recovered other narcotics from Clark, including 59 Xanax bars and more cocaine. A cop noted that Clark “continued to ask this officer to throw away the evidence and stated that, ‘Someone gave me the pills to hold, we were at a party.’” Investigators also seized $761 and an iPhone from Clark. Clark was charged with three felony narcotics counts and booked into the Mahoning County jail. Released from custody after posting $15,000 bond, Clark is scheduled for an April 3rd preliminary hearing in County Court.
(https://bit.ly/2Yw0JfJ)

The Real Housewives of Beverly Hills cast did not support Lisa Vanderpump at the opening of her Las Vegas venue. Vanderpump said the ladies did not attend because she forgot to hit send on the email invitation. (http://goo.gl/u4kRFL)

The HBO series “Sex And The City” is being revived as a TV series and will focus on married women in their 50’s. (https://bit.ly/2HUYkX7)

A new book called “Ladies Who Punch” details the wild backstage exploits at “The View.” (https://bit.ly/2Uj08iv)

SCOOP OF THE DAY: Brought to you by BetterCreditCards.net
The FAA is investigating a technical glitch that caused electrical problems and delayed thousands of flights around the country Monday. It was bad. Southwest and Delta had no computers, Jet Blue had no communication software.(https://nyp.st/2ODKc4P)

The U.S. Military is exploring a way to use living sea creatures as underwater spies that can track enemy movements. (https://ind.pn/2KakRRN)

Burger King is testing plant based meat with its new “Impossible Whopper.”
(https://reut.rs/2WvQOVQ)

New York City has passed a congestion pricing tax that will charge drivers $11.50 per day to enter the city below 60th street. The charge comes in addition to the $8 toll at the Bridges and Tunnels. The new tax is supposed to raise money for trains and buses. (https://cbsloc.al/2Uk3ykV)

Facebook CEO Mark Zuckerberg is calling on Government Regulators to monitor the content on his site. (https://bit.ly/2FNg845)
Rolling Stones front-man Mick Jagger is set to undergo heart surgery in New York City this Friday and doctors expect him to make a full recovery.
(https://dailym.ai/2I4jL79)


FUN FACT FOR YOU:
Share this with your friends... they'll think you're really smart!
A Giraffe Cleans Its Ears With Its Tongue. Not only are they the tallest animal in the kingdom, giraffes may be the most creatively fastidious, using their on-average 21-inch tongues to clean their own ears.


WEIRD NEWS: Brought to you by WeirdGiftOfTheDay.com
A sheriff's deputy in Minnesota responding to complaints of a swerving vehicle, pulled over a distracted driver who actually had a large pig sitting in his lap. Sgt. Jason Foster of the Chisago County Sheriff's Office took a photo on Tuesday of the literal road hog after in a pickup truck that had trouble maintaining its lane. Foster initially thought the driver was distracted by a cell phone. But when he saw what was really going on, he said “It was kind of shocking. He had this 250-pound pig on his lap. In fact, it was leaning against the steering wheel he was muscling the steering wheel to keep it in its lane.” The animal-loving motorist told the deputy he was moving to the north shore of Lake Superior and apparently did not want his pet pigs to get cold during the trip. Sgt. Foster let the driver off with a warning, and also warned other motorists who might take their affections for their porcine pets too far. (https://dailym.ai/2I5oq8X)
MOMENT OF DUH: Brought to you by FunkyMonkeyShirts.com

A Wisconsin man was arrested after police say he pulled out a gun and demanded $10,000 from an employee at the Community First Credit Union in Appleton, Wisconsin. The teller handed Xengxai Yang the money, then Yang zip-tied her hands before leaving the bank. When police arrived, they spotted Yang walking away from the bank wearing black clothing and what appeared to be a ski mask. Officers stopped Yang to question him and when they searched him they found a modified .22-caliber rifle with a round in the chamber, extra rounds of ammunition, zip ties, and the cash he allegedly stole. Yang admitted to committing the robbery and told police that he had “decided to try something new today, so I robbed a bank.” He claimed that the robbery was unplanned, but did not explain why he had zip ties and extra ammunition on him when he was taken into custody. (https://ihr.fm/2HQZl2g)
THESE THREE THINGS!

What do these 3 things have in common:
A RABBIT—A MAN—CORN PLANTS
(They have EARS)