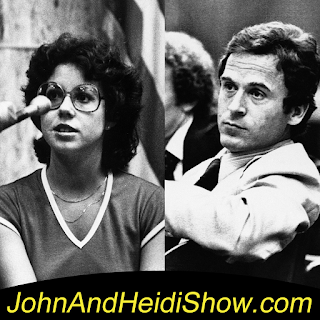 Today we talk with Kathy Kleiner, Ted Bundy’s Living Victim. In 1978 Kathy was asleep in her Florida sorority house when the notorious serial killer broke in and brutalized her. There are many books about Ted Bundy, a new Netflix docu-series called Conversations With a Killer: The Ted Bundy Tapes, and a much-hyped Sundance flick called Extremely Wicked, Shockingly Evil and Vile with Zac Efron is playing Bundy. After years of requests for it, Kathy is finally working on her own book. We talk to her about this project and how it's going.

A new study found that men with long beards are carrying more deadly bacteria than the average dog. (https://bit.ly/2XeNLBL)

A Pennsylvania woman tried to swallow the evidence after police pulled her over with bags of heroin in the car. According to the Lancaster Bureau of Police, 29-year-old Tiffany Root was stopped by Lancaster police late Tuesday, at which point officers found controlled substances. Police said that during transport to the hospital, Root “attempted to destroy” seven bags of heroin “by chewing/eating it.” Hospital staff was able to recover the bags by convincing Root to spit them out before swallowing. Police also found 15 suboxone pills and more than 70 other pills without a prescription, as well as $907, two boxes of glassine bags, an electronic scale, multiple dime-sized bags, and a cut straw. She was charged with seven counts of possession of a controlled substance with intent to deliver, possession of drug paraphernalia, tampering with physical evidence, and driving without a valid license.
(https://bit.ly/2Kgs3M1)

Angelina Jolie and Brad Pitt finalized their divorce on Friday and are officially separated. (https://pge.sx/2KDv2yh)
The city of Chicago filed a lawsuit against actor Jussie Smollett yesterday to cover the costs associated with the investigation of a hate crime that Smollett allegedly stage. Criminal charges against the “Empire” actor were dismissed by prosecutors more than two weeks ago. The 36-year-old Smollett refused the city's demand for $130,000 to cover police overtime costs to investigate the actor’s claims.

SCOOP OF THE DAY: Brought to you by BetterCreditCards.net
Orioles first baseman Chris Davis hit a home run on Saturday to end his record breaking, 0-54, hitless streak. (https://cbsloc.al/2GlkNuo)


The world’s largest plane, the Strat-o-launch, flew for the first time ever on Saturday, clocking in a 2 and a half hour test flight in Mojave, California.
(https://bit.ly/2UTAPDT)

A video has gone viral of a motorcycle rider in India getting knocked over by a wild bull. India has over five million wild cows roaming the country.
(https://fxn.ws/2IjebPm)

Hundreds of people were evacuated from Downtown Berlin after a World War II era bomb was found in the German city. (https://nyp.st/2GmfZ84)


FUN FACT FOR YOU:
Share this with your friends... they'll think you're really smart!
Abraham Lincoln once invented a device for lifting riverboats over shallow water.


WEIRD NEWS: Brought to you by WeirdGiftOfTheDay.com
A Fort Smith mother is demanding an apology after she says two people threw food at her daughter while she was at work. Gwen Grice says she picked her daughter from work earlier this week and that's when she heard some upsetting news. Grice said, “A customer came through the line and threw a bag of food at her. I brushed it off because she brushed it off.” Her son later showed her a Snapchat video that made her take action. She said, “He shows me the video and it makes me completely irate because not only did someone throw food through the window, but they hit her with it.” She filed a police report with the Fort Smith Police Department. The police report refers to the people in the car as "two boys". It says the boy in the driver's seat was the one who threw the food and called the young woman something vulgar. According to a Fort Smith Police Department spokesman, this is an open investigation, they are taking tips about it and looking for the people responsible. (https://bit.ly/2VEtg0L)

When you gotta go, you gotta go. But a woman with a full bladder gave new meaning to the expression. Police say the woman allegedly asked some Philadelphia city workers to pee between two of their parked work trucks. But she took off in one of the vehicles instead. As NBC-10 in Philly reports, the woman, identified as 33-year-old Amanda Bonner, approached some Philadelphia street department employees and explained her bladder distress. Police say that given her dilemma, the employees granted her permission to relieve her bladder in between two of their parked trucks. But as NBC-10 reports, at least one of the city-owned Ford F-350 pickup trucks was unoccupied with the engine running when the woman asked to use the area near it as an impromptu toilet. But instead of just going, the woman actually went. Police said Bonner allegedly entered the running pickup truck and drove off westbound on Walnut Street. The shocked city employees gave chase, one on foot and the others in another city truck. The employees caught up with Bonner and the stolen vehicle at a red light. By then, police arrived as well, and Bonner was then taken into custody. (https://bit.ly/2GfTqQW)
THESE THREE THINGS!


What do these 3 things have in common:
TWO LITTLE FEET—AN ALLIGATOR—A POLO PLAYER?
(They are logos on shirts)

https://www.sunnyskyz.com/blog/2751/Mailman-Receives-A-Heartwarming-Note-From-A-Family-With-A-Dog
Awesome story! Please feel free to share YOUR good News too!
Also, consider joining John & Heidi at 80s In The Desert on
May 3rd & 4th in Las Vegas – www.RadioTravelGroup.com
(Use promo code RADIO to save $25 per ticket)
Newer Post Older Post Home