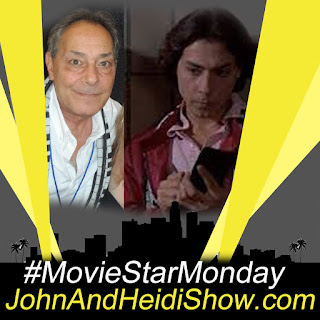 It's a #MovieStarMonday with Robert Romanius, MIKE DIMONE from Fast Times At Ridgemont High! We spoke with him at 80s in The Desert. He will also be at 80s in The Sand once again. FIRST TIME GUESTS get a $200 discount through www.RadioTravelGroup.com

A study from the Chinese Academy of Social Sciences discovered the earliest residue from marijuana, dating back to the year 4,000 B.C. (https://bit.ly/31HB9Ga)

A 21-year old man was charged Thursday after police say he called 9-1-1 after being kicked out and banned for life from a bar in New Jersey last month. Randie Bangart, of Hackettstown, is facing a fourth-degree charge of calling 9-1-1 without needing the service. According to police, on May 25th, shortly after 11:30 p.m., police responded to Marley's Gotham Grill on Main Street in reference to a dispute. While officers were responding, 9-1-1 received a call from a man named “Randie” complaining about being kicked out of the bar. When police arrived at the bar, they allegedly say Banghart outside yelling and cursing at bar staff. Officers determined he was intoxicated and was charged with disorderly conduct related to the alleged incident. (https://bit.ly/2KSfXHO)

MTV announced that “Lindsay Lohan’s Beach House” is being canceled after one season. (https://pge.sx/31IWHSY)

The Hollywood box office is being dragged down by a wave of comedies that tanked with fans. (https://bit.ly/2XZygOI)

SCOOP OF THE DAY: Brought to you by BetterCreditCards.net
U.S. Senators were briefed Thursday on a slew of UFO sightings by Navy Pilots in recent years.(https://dailym.ai/2N1B5xP)

A patent for Amazon’s newest drone says it could be used to spy on your home. (https://bit.ly/2KXhWKS)

A Baltimore School Teacher has been arrested after she used snow cones to lure a teenage boy into having sex with her. The teacher received five years in prison. (https://dailym.ai/2x5TG0K)

A Syrian refugee was arrested in Pittsburgh for planning an attack on a Christian church. (https://bit.ly/2MVKDKL)

The Iranian Government warned the United States that it’s, QUOTE, “totally ready and prepared for war” after shooting down one of our drones in international air space. (https://nyp.st/2LcApDt)


WEIRD NEWS: Brought to you by WeirdGiftOfTheDay.com
A little league game turned into a giant brawl between parents and coaches in Colorado — and cops are looking to identify the participants. Police said, “These coaches and parents, unhappy with a baseball game involving 7-year-olds and a 13-year-old umpire, took over the field and began assaulting each other.” Several people were injured during the melee, including one seriously, and four people have been cited for disorderly conduct. But police particularly want to identify one man seen wearing a white shirt and teal shorts who punched another man as he stood near a fence while he wasn’t looking. According to the station, he could face assault charges. Police spokesman John Romero said, “I think the saddest part in all of this is we’re talking about a 7-year-old baseball game. I think it’s the parents who have to grow up.” (https://nyp.st/2Fn7xV2)

A man attempting to smuggle a flock of singing finches was caught in customs on Sunday at John F. Kennedy International Airport in New York City. 39-year-old Francis Gurahoo was charged with trying to smuggle approximately 34 finches from Guyana into the United States. Gurahoo, of Connecticut, concealed each live bird in a plastic hair curler in his carry-on bag. According to the complaint, Gurahoo told prosecutors he planned to sell the suitcase of birds for about $100,000, at a going rate of about $3,000 for each bird. Guyanese finches are known to be used for “singing contests” in Brooklyn and Queens. Gamblers set the songbirds against each other and bet on their voices. Prosecutors said that when a bird becomes a champion, its value can spike to over $5,000.
(https://cnn.it/2x5gpdk)

THESE THREE THINGS!
What do these 3 things have in common:
a gymnast, a decathlete and a bank
(They have VAULTS)