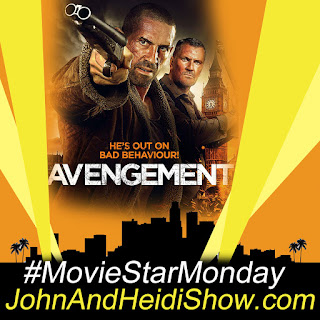 It's a #MovieStarMonday with Scott Adkins, a skilled actor and one of the best martial artists in the world and has gained recognition from his early days doing stunts on films such as Warner Bros.’ DARK KNIGHT franchise and Fox's X MEN franchise. Scott can be seen in ZERO DARK 30 , THE EXPENDABLES and starred in UNIVERSAL SOLDIER 3D for Sony. He has a new action/thriller in theaters now. See AVENGEMENT in Theaters, On Demand and Digital by Samuel Goldwyn Films.

A survey by the International Data Corporation found that smart phone purchases have fallen by 6% in the past year as more people wait to upgrade their phones. (https://cnb.cx/2W7jcSt)

A drunk passenger was banned for life from flying on the Russian airline Aeroflot after he broke a flight attendant’s leg during a fight over a cigarette. Maxim Pashnin boarded a flight from Siberia to Moscow last week when he lit a cigarette and became violent once he was asked to stop — forcing a flight attendant into the cockpit during the struggle. Police said, “Pashnin pushed the young woman stewardess inside the cockpit and then hit the pilots, the captain, and the co-pilot. These three crew members resisted and managed to block the hooligan, and to pass him into the hands of police.” The drunk passenger needed to be restrained by law enforcement officials and dragged from the flight. One of the flight attendants suffered a broken leg in the struggle. Pashnin faces up to six years in jail for “air hooliganism” and is also be banned from flying with Aeroflot. (https://nyp.st/2JulAMh)


“Saturday Night Live” alum Chris Kattan claims in his new book that Lorne Michaels pressured him to have sex with a director so she wouldn’t back out of the 1990’s film “Night at the Roxbury.” (https://pge.sx/2EEQrBM)

Kit Harington, who played Jon Snow in “Game of Thrones,” has checked into a Connecticut rehab following the shows finale to deal with stress and alcohol. The rehab retreat starts at $120,000 a month. (https://pge.sx/2EE8wQu)

SCOOP OF THE DAY: Brought to you by BetterCreditCards.net
The Secret Service revealed that the man who set himself on fire outside the White House suffered burns to 85% of his body before dying.
(https://dailym.ai/2KaVcXq)

Traeger is selling a BBQ Grill that’s equipped with WiFi so you can control it from your smart phone. The grill is electric so you’ll have to plug it in to turn it on. From there, the app will light the grill, monitor temperatures, and suggest recipes. (https://bit.ly/2WBvemg)


A Florida man was arrested for assaulting his mom with a piece of corn on the cob. (https://bit.ly/2WvePQx)

A video has gone viral of a North Carolina man chugging his beer as police removed him from a bar. (https://bit.ly/2Qwwm5e)

Less than one year after being mocked online for temporarily changing its name to IHOB, IHOP is changing its name again on June 3rd. Marketing Gurus say that last year’s name change resulted in them selling 225% more burgers.
(https://fxn.ws/2KcQdW7)

A new study found that 25% of Americans worry about money all the time.
(https://cnb.cx/2YUZrKJ)

FUN FACT FOR YOU:
Share this with your friends... they'll think you're really smart!
Ray Bradbury Wrote the Screenplay for Moby Dick. The man had many talents. In addition to his popular short stories and classic novels like Fahrenheit 451, Bradbury also penned the screenplay for the 1956 film Moby Dick, directed by John Huston. It was not a pleasant process though; Bradbury called it “eight long months of agonizing work, subconscious work.”


WEIRD NEWS: Brought to you by WeirdGiftOfTheDay.com
They do say “have it your way.” According to the Miami Dade County Police Department, a career criminal and her girlfriend allegedly attacked two Burger King employees in Miami for refusing to give them free French fries. 42-year-old Natasha Ethel Bagley was arrested Monday for the April 2nd crime and charged with three counts of attempted robbery with a weapon, burglary, and criminal mischief. Police say that her accomplice, 27-year-old Genesis Peguero, remains on the loose. The hangry duo allegedly came through the Palmetto Bay fast-food joint’s drive-thru, and when an employee refused to cough up any free fries, they came inside the restaurant minutes later demanding to know who called them a “b---ch.” Peguero then hopped over the counter and demanded the manager open the register and give her all the money while threatening to pistol-whip the staff member. Both of the women then kicked and punched at least two Burger King employees. Bagley is currently being held in jail without bond. (https://nyp.st/2VWu7cE

A Montana woman was arrested early Monday morning after allegedly leading a Montana Highway Patrol trooper on a high-speed chase on I-90, while naked. According to court documents, the woman also allegedly groped the trooper after she was arrested. Court documents state that at 2:10 a.m. MHP Trooper Brennan Plucker saw a gray sedan, with only its amber running lights on, driving eastbound on I-90. Trooper Plucker said he observed the driver, identified as 38-year-old Lisa Christine Walter, drift over of the lane line and partially into the passing lane before he activated his emergency lights. Trooper Plucker said Walter maintained speeds of 90-100 mph for three miles before slamming on the brakes and coming to a complete stop on the shoulder of the interstate. That's when the trooper said Walter put her vehicle in reverse and began driving westbound in the eastbound lanes. Court documents state Trooper Plucker also put his patrol car in reverse and was able to observe the driver was a woman, the only occupant in the vehicle, and appeared to not be wearing a shirt. The documents say that while Trooper Plucker was putting Walter into the back of his patrol car, Walter touched him in the genital area. (https://bit.ly/2YXCMO4)
THESE THREE THINGS!
What do these 3 things have in common:
CHER—DENNIS RODMAN—FANTASY ISLAND
(They have Tattoos)