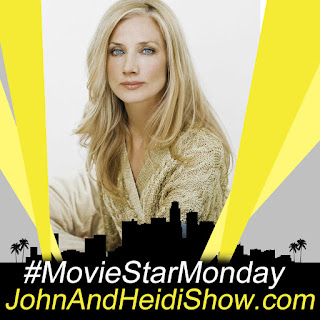 It's a #MovieStarMonday with Joely Richardson, known for her role as Julia McNamara in the FX drama series Nip/Tuck, and Queen Catherine Parr in the Showtime series The Tudors, has a NEW series on Starz. THE ROOK is a supernatural spy thriller, based on the popular book of the same name. The Rook premiered on STARZ on June 30.
LINK TO TRAILER https://www.imdb.com/title/tt7395992/?ref_=nm_flmg_act_2

A study by the National Highway Traffic Administration found that Washington D.C. and Baltimore have the worst drivers in the country. (https://bit.ly/2NfICcF)

The Limestone County, Alabama Sheriff’s Office is still looking for a man in connection to a drug bust involving a squirrel. 35-year-old Mickey Paulk is wanted for possession of a controlled substance and drug paraphernalia. Deputies also believe he is illegally in possession of a firearm. When authorities executed a search warrant at an apartment, they say they found meth, drug paraphernalia, body armor, and a caged squirrel. Sources told the sheriff's office that Paulk fed the squirrel meth to help keep it aggressive and trained it to attack people. Animal control officials were called to retrieve the squirrel but since there wasn't a safe way to test it for meth they released the squirrel into the wild. In a Facebook video, Paulk disputed all claims made against him.(https://bit.ly/2MZNySM)

SCOOP OF THE DAY: Brought to you by BetterCreditCards.net
Hong Kong has been named the most expensive city in the world to live in.
(https://bit.ly/2LjVD24)

Buzzfeed Chairman Ken Lerer has stepped down after ten years on the job.
(https://nyp.st/2xfmrZi)

A New York District Attorney claims that Cardi B paid a couple to beat up a stripper who slept with her boyfriend, Offset. (https://pge.sx/2X1tgrL)

FUN FACT FOR YOU:
Share this with your friends... they'll think you're really smart!
Eating pistachios can help reduce erectile dysfunction. For a 2011 Turkish study published in the International Journal of Impotence Research, 17 men with erectile dysfunction were given 100 grams of pistachios to eat for lunch every day for three weeks. The subjects were then measured on the International Index of Erectile Function—and the pistachios proved to improve blood flow and the dilation of blood vessels. Hey, it’s certainly a cheaper option than Viagra!


WEIRD NEWS: Brought to you by WeirdGiftOfTheDay.com
Court officials say a Florida man charged with burglary defecated during his criminal trial and tried to throw his feces at the judge. The Miami Herald reports 33-year-old Dorleans Philidor was sitting in a wheelchair next to Miami-Dade Circuit Judge Lisa Walsh when officials say he tried to throw his excrement at her. Luckily, it did not reach her. Witnesses say dozens of corrections officers responded and the trial was moved while the courtroom was sanitized. Miami Dade Circuit Court spokeswoman Eunice Sigler says Philidor also defecated on himself in a holding cell Thursday. Jurors subsequently acquitted him of the burglary charge. The newspaper says he still faces another trial in a grand theft auto case. It's unclear whether he'll face any charges involving the feces.
(https://bit.ly/2xdEBul)

Metro police have arrested a man accused of stealing a pick-up truck from a disabled veteran and nearly hitting several vehicles involved in a funeral procession Monday in South Nashville. 18-year-old Zakariah Musa was charged with disorderly conduct at a funeral, theft, and evading arrest. According to an arrest affidavit, officers observed a Ford F-150 with a disabled veteran tag driving erratically at the Swiss Ridge Apartments on Swiss Avenue. Officers discovered the vehicle was stolen and followed it to the intersection of Nolensville Pike and Swiss Avenue. As police approached the intersection, a funeral procession was traveling through, but the suspect cut through the procession, almost hitting multiple vehicles. Police said Musa parked at a Walmart, threw the truck’s keys onto the ground, and ran into a wooded area. Officers were eventually able to locate Musa and take him into custody after a brief foot chase. (https://bit.ly/2RAesPL)
THESE THREE THINGS!
What do these 3 things have in common:
MORNING GLORY--GUESS WHO'S COMING TO DINNER--THE LION IN WINTER?
(Movies for which Katharine Hepburn won the Best Actress Oscar)