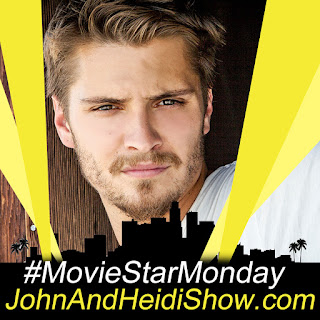 It's a #MovieStarMonday with Luke Grimes… You know Luke from Fifty Shades of Grey, Brothers and Sisters, True Blood, and many more! He's BACK for another season on the series YELLOWSTONE. Season 2 started Wednesday, June 19th... Yellowstone airs Wednesdays at 10/9CT on Paramount Network
https://www.paramountnetwork.com/shows/yellowstone

An NPR Survey found that 84% of Americans think we’re angrier than we were a generation ago. (https://n.pr/2NhRluO)

A 26-year-old New Jersey woman who was dangerously drunk just after midnight assaulted two police officers and an emergency medical technician after she lost money in a pinball machine at a Plainfield Township bowling alley. Police said that Kilee Nicole Cunningham was reimbursed for the money lost in the machine but punched the glass on the game. She was told to leave Blue Mountain Lanes but instead requested more alcohol. When she was refused, she threw a cup of water in the face of an employee before heading out. An officer caught up to Cunningham and a man walking on the street. When asking for identification, the officer noticed both smelled of alcohol. Cunningham refused the request and began yelling obscenities, slurring her words, and losing her balance. The officer determined she was “manifestly under the influence of alcohol to the point where police felt she was a danger to herself or others.” Cunningham pulled away as the officer attempted to put her into handcuffs, but as two other officers arrived to assist, Cunningham was restrained in the cuffs. (https://bit.ly/2See3RR)

Terry Crews announced that he’s in talks to create a sequel to “White Chicks.”
(https://nyp.st/3050hVJ)

SCOOP OF THE DAY: Brought to you by BetterCreditCards.net
A Deseret News Poll found that 1 in 4 Americans do not consider a one night stand to be cheating. (https://bit.ly/2NskWSd)

A survey by Match.Com found that "travel" was the most popular term on their site. Match.Com says they facilitated 5.5 million romantic encounters last year.
(https://on.mktw.net/2J8byiF)

A Florida man was arrested after he broke into a Wendy’s and cooked himself dinner.(https://bit.ly/2J66ISN)

A German Couple died while having sex in their car after they left it running while they did the deed.(https://bit.ly/2XlGvIX)

A stowaway passenger fell 3,500 feet from a plane and landed in the garden of a London home. (https://bit.ly/2LyIQsS)

FUN FACT FOR YOU:
Share this with your friends... they'll think you're really smart!
Nicolas Cage and Jake Gyllenhaal could’ve been Aragon and Frodo in The Lord of the Rings. It may be hard to imagine anyone else as Frodo or Aragorn in The Lord of the Rings film franchise, but before Elijah Wood and Viggo Mortensen nabbed the coveted roles, many famous actors were considered. For example, Nicolas Cage was offered the role of Aragorn but turned it down, telling Newsweek, “There were different things going on in my life at the time that precluded me from being able to travel and be away from home for three years.”
And Jake Gyllenhaal might have been Frodo, but he bombed the audition for one not-so-small reason. “I remember auditioning for The Lord of the Rings and going in and not being told that I needed a British accent. I really do remember [director] Peter Jackson saying to me, ‘You know that you have to do this in a British accent?’” he recalled to The Hollywood Reporter. “We heard back it was literally one of the worst auditions.”

And Sean Connery turned down the role of Gandalf. The wise wizard of The Lord of the Rings almost had a bit of a 007 vibe. Sean Connery was originally offered the role that Ian McKellen would make into a classic but turned it down—despite the offer of a 15 percent stake in the franchise’s box office profits.


WEIRD NEWS: Brought to you by WeirdGiftOfTheDay.com
These kinds of things only seem to happen in Florida. Officials say they are looking for a “hamburglar” who broke into two restaurants, fixed himself some food, and then stole money. Officials are looking for a man that robbed two Florida restaurants. The Martin County Sheriff’s Office says the suspect forced his way into a Wendy’s in Jensen Beach, Florida, by smashing a window with a brick. He then fired up the grill, made himself a hamburger, and walked away with the store’s safe. He also went to another Jensen Beach restaurant, where he helped himself to more food and money. Authorities say the man also tried to rob a gas station, but could not break in. On Facebook, the office posted photos and asked the public to help identify the suspect, who has a tattoo on his left arm and is described as a white male in his mid-thirties. (https://cbsloc.al/323iUew)

According to a felony battery complaint, incensed that his girlfriend “bought the wrong food from McDonald’s,” a Florida Man yesterday struck the woman “with sweet and sour sauce packets in the head and face area.” Cops say that Jesus Oscar Ferrer Jr. attacked the woman--with whom he has a child--in the couple’s room at a motel in suburban Tampa. The victim told police that Ferrer “became angry” and began arguing with her over the “wrong food” being purchased at McDonald’s. During the Sunday afternoon dispute, 30-year-old Ferrer allegedly began pelting the woman with plastic containers of McDonald’s “Sweet ‘n Sour” dipping sauce. Ferrer fled the motel, but was subsequently arrested and booked into the Pasco County jail on a felony battery charge. (https://bit.ly/2RNUnWo)
THESE THREE THINGS!
What do these 3 things have in common:
ARMY BARRACKS--ARCADES--FOOTBALL GAMES
(They have QUARTERS)