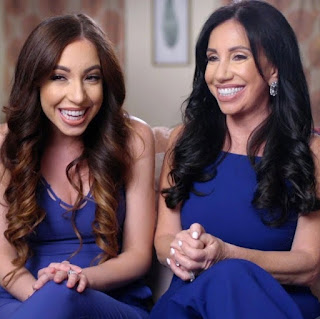 Cher and Dawn from TLC’s NEW SERIES ‘sMOTHERED’ EXPLORING EXTREME MOTHER-DAUGHTER BONDS... the final episode is on Sunday July 28th at 10PM E/P
Dawn and Cher are more like twins than mother and daughter. They look, speak and act alike, and they both married Jewish doctors in their early twenties! Their relationship is put to the ultimate test when Cher admits that she has been keeping a huge secret from her mom, forcing Dawn to reevaluate her place in her daughter’s life. You can watch a sneak peek of the series here: https://www.facebook.com/watch/?v=426103094844903.

THEIR BOOK IS AVAILABLE HERE - https://amzn.to/2Yhp5IY

A British study found that dropping the F-Bomb when you get hurt will increase your pain tolerance by thirty three percent. (https://bit.ly/2YaZVQc)

A strip club patron who claimed to have downed thirty-three beers was itching for a fight, but his fiancée and waning consciousness held him back. Police in St. Lucie, Florida were called to help a man who had passed out in parking lot found shortly before midnight on July 7th. What they found was beer-enthusiast Michael Monahan raring to go. The 48-year-old man appeared to be blacked out when cops arrived to find his fiancée rubbing his back outside the Body Talk Sports Bar. Then Monahan reportedly sprung to life despite his significant other begging him to “be calm” and not fight with the officers. The advice went ignored. When police told Monahan they were there to help him, he’s said to have raised his fists and challenged them. According to the report, “He ran around the parking lot and got aggressive before passing out,” He was then taken to an area hospital, where he claimed he’d consumed thirty-three beers. (https://bit.ly/2JGMXS0)

Beyonce’s new song from “The Lion King” has tanked on the pop charts, and is currently at number sixty-six. The song is called “SPIRIT”
(https://bit.ly/2M0xEVS)
“The View” was forced to go to commercial on Friday after a vicious shouting match broke out between Meghan McCain and the rest of the hosts.
(https://dcdr.me/2XTIiFm)

Wendy Williams is producing her own Lifetime biopic that will debut this fall.
(https://pge.sx/2yaZt60)

Harvey Weinstein was seen dining at the same New York restaurant where an actress accused him of groping her. (https://dailym.ai/2SzBwi0)

Over ten million people have watched the first trailer of Tom Hanks as “Mr. Rogers.”(https://bit.ly/2LCa2rh)

SCOOP OF THE DAY: Brought to you by BetterCreditCards.net
A group of Hackers stole the personal information of every adult citizen living in Bulgaria this weekend. It was five million people. (https://cnn.it/32D2BFC)

A growing number of commercial airlines in the U.S. have canceled flights to Cairo as a precaution for passenger safety. Apparently, the situation in Cairo is becoming pretty dangerous. (https://abcn.ws/2JIVXq3)

Researchers in the Greek Islands have discovered a “trojan horse drug” that can trick and then kill cancer cells in the body. The drug convinces the cancer cell that it’s a form of FAT, which the cells then feed on and die on the inside after the two are connected.(https://bit.ly/2GnDQUh)

A lamb that was named the Grand Champion of an Ohio 4-H Contest is under investigation after veterinarians discovered drugs in its system.
(https://nyp.st/2Gppwed)

The annual desert retreat known as “Burning Man” has become a hotbed for people who are re-selling their psychedelic prescription drugs.
(https://bit.ly/32NCJXV)

Fifty dead whales have washed up onto the beaches of Iceland so far this summer. (https://bit.ly/2Z5rwQ3)

FUN FACT FOR YOU:
Share this with your friends... they'll think you're really smart!
Octopuses lay 56,000 eggs at a time. These eight-legged sea creatures lay a staggering 56,000 eggs at one time. Each egg—which biologist Jim Cosgrove describes as “a gleaming white tear-drop about the size of a grain of rice”—comes out on its own, then is gathered up along with all of the other eggs and kept in a protective braid-like den until they’re ready to hatch.


WEIRD NEWS: Brought to you by WeirdGiftOfTheDay.com
A 21-year-old McDonald’s employee named Brittany Mapel is behind bars after allegedly “smashing lemon cake” in her mother’s face during a confrontation Friday night in the family’s home outside Tampa, Florida. A complaint affidavit does not indicate why Mapel “willingly smashed lemon cake” in her parent’s face. After the alleged cake battery, Mapel snatched a cell phone from her brother’s hands and reportedly declared, “Nobody is calling the cops today.” When police arrived at the family’s Holiday residence, they observed the 51-year-old victim’s “face to be covered in cake, and there to be cake all over the floor.” Mapel was arrested on a misdemeanor battery count. She was also charged with tampering with a witness, a felony, for allegedly taking her sibling’s phone before he could use it to dial 9-1-1. A judge has ordered Mapel to have no contact with her mother or brother. (https://bit.ly/30MG2wp)

A 26-year-old Florida man is behind bars after providing law enforcement with his brother’s name because he was wanted on felony warrants. The only problem is that his brother is wanted, as well. According to the arrest report, Jacob Hisel was walking around 4:30 a.m. on July 20th when a deputy on patrol spotted him and made contact safety reasons. Deputies asked for identification and Hisel said he didn’t have any ID on him, but he said his name was Nathan Hisel, his brother. Nathan Hisel is wanted by the Bradenton Police Department so Jacob Hisel was arrested under his brother’s name and was initially booked into the Manatee County jail on his brother’s warrant. After being fingerprinted, however, his real identity was discovered. (https://hrld.us/30TAd0c)

THESE THREE THINGS!
What do these 3 things have in common:
WEIGHT LOSS CLINICS--TV NETWORKS--COMPUTER COMPANIES?
(They have PROGRAMS)