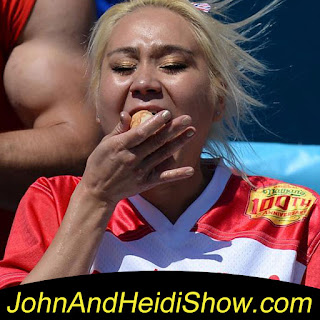 A Hialeah, Florida man was arrested early Friday after police seized three pounds of methamphetamine worth $25,000, which he said was for “filtering pools.” 53-year-old Guillermo Arteaga was being held on $25,000 bail at the Volusia County Branch Jail. Arteaga was arrested after police stopped him for doing 80 mph in a 45-mph zone and discovered an arrest warrant out of Palm Beach County. When police conducted a vehicle inventory before Arteaga’s car was towed, they found a black bag in the trunk that contained smaller vacuum-sealed bags with large quantities of an “ice-like substance” that tested positive for meth. According to police, Arteaga said that the meth wasn’t for human consumption but for “filtering pools.” He was charged with trafficking methamphetamine 200 grams or more and possession of drug paraphernalia. He was also charged with grand theft over $20,000, burglary of a conveyance, and grand theft of a motor vehicle. (https://bit.ly/2ZGLVL3)

“Yesterday,” the film in which everyone forgets The Beatles music, hit theaters this weekend. (https://nyp.st/2Ll2vfL)

SCOOP OF THE DAY: Brought to you by BetterCreditCards.net
Paris, France hit an all-time record of 114 degrees on Friday.
(https://wxch.nl/2Lp7ITF)

Carnival Cruise Lines has a roller coaster on its newest ship, the “Mardis Gras.”
(https://bit.ly/2rBJKJS)

Cardi B gets naked in the new video for her song, “Press.”
(https://nyp.st/2ITolFB)

O.J. Simpson revealed that he once hid out at Neverland Ranch when his family was under siege by the media. Simpson said that Jackson was never there, but always had a gift for the children. (https://nyp.st/2ISuFge)

A lost Whitney Houston track that was recorded in 1990 has been released seven years after her death. They’re saying Whitney might crack the top ten with this. Proving that even in death, Whitney can still make hits. (https://bit.ly/2RJEdx4)

Meghan Markle and Prince Harry have hired their THIRD nanny in the past six weeks after another woman refused to work for the couple.
(https://pge.sx/2FGrOVM)

FUN FACT FOR YOU:
Share this with your friends... they'll think you're really smart!
Caterpillars turn into soup before becoming butterflies. We all know that caterpillars create a cocoon in which they transform into beautiful butterflies, but what actually goes on inside that cocoon is pretty gross: The insect actually “digests itself, releasing enzymes to dissolve all of its tissues,” as Scientific American explains. Once it’s fully disintegrated (excluding some “imaginal discs”), it then begins “the rapid cell division required to form the wings, antennae, legs, eyes, genitals, and all the other features of an adult butterfly or moth.”


WEIRD NEWS: Brought to you by WeirdGiftOfTheDay.com
A Kansas man who robbed a bank last September and told police that he was hoping to get caught so he would get prison time to escape his wife, was sentenced Tuesday to six months of home confinement after pleading guilty. Lawrence John Ripple took the guilty plea in January. He told the judge on Tuesday that he had heart surgery that left him depressed when he committed the bank robbery. His public defender told the court that Ripple had lived a law-abiding life and was in a stable relationship with his wife. He has four step children. Ripple handed a note to a bank teller in Kansas City, demanding cash and warning he had a gun. Ripple took the money-- $2,924-- and went to sit in the lobby where he told a guard he was the “guy he was looking for.” Officers arrived quickly. An FBI agent wrote in the affidavit that Ripple had earlier been arguing with his wife. He told investigators he wrote the note in front of his wife, telling her he would “rather be in jail than at home.” (https://fxn.ws/2NnnMYD)

Cops allege that a Florida Woman broke into her ex-girlfriend’s home at 3:00 a.m. and assaulted the sleeping victim with a lava lamp. Investigators say that 29-year-old Chanel Hall “forced entry through the locked front door” of the victim’s Tampa-area residence. Hall then went to an upstairs bedroom where the 26-year-old victim was asleep. According to a criminal complaint, Hall hit her ex “in the forehead with a lava lamp.” The blow opened a gash on the woman’s head that required several stitches to close. Hall was booked Monday on a felony burglary with aggravated battery or assault count. She was also charged with criminal mischief, a misdemeanor. Hall, who was released from the Pasco County jail last night after posting $650 bond, has been ordered by a judge to have no contact with the victim. The court complaint notes that, “Victim and Defendant were involved in a sexual relationship for approximately ten months.”
(https://bit.ly/2IOKncm)

THESE THREE THINGS!
What do these 3 things have in common:
JAPAN—IRELAND—CUBA
(They are all ISLAND NATIONS)