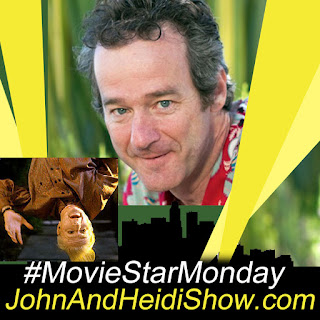 It's a #MovieStarMonday with Jeffrey Weissman from Back To The Future 2 & 3
http://jeffreyweissman.com/

A new study claims that mothers who consume fluoride during pregnancy will have children with lower IQ’s. (https://bit.ly/2ZiCz7W)

A Nashville man was arrested for what started out as an alleged shoplifting attempt, that turned into charges of assaulting an officer. Police report that they were at Walmart on Dickerson Pike north of Nashville on another call, when while in the loss prevention office they observed John Allen Honaker on security camera, shoving items in his pants. Police and the loss prevention employee detained the man, and discovered he had placed two propane bottles in his pants, along with sliced beef brisket. The total value of the items found in Honaker's pants is approximately $35.00. Police say the company asked to prosecute Honaker for shoplifting, and so they began transporting him to central booking. While on the way, officers report that Honaker tried kicking out the windows on the police vehicle, as well as spitting a number of times inside, and slammed his head against the plastic partition separating the rear and front seats. He also allegedly attempted to kick the officer in the head and midsection. He admitted that he had been drinking prior to being arrested.(https://bit.ly/31LPsJj)

Jamie Foxx posted an Instagram story saying that the reason his new girlfriend Sela Vave has already moved in with him is because he’s trying to launch her music career. Foxx also said that people shouldn’t read too much into it because Ed Sheeran and Nick Cannon also lived with him when THEY were trying to launch their careers.(https://pge.sx/2zcKQPY)

Autumn Calabrese, the trainer of “Revenge Body,” says the makeover show is not just about the workout because they deal with emotional issues as well.
(https://pge.sx/2ZgrKmy)

SCOOP OF THE DAY: Brought to you by BetterCreditCards.net
Officials at AREA 51 have created an emergency crowd planning department in case too many people show up to the site on September 20th.
(https://bit.ly/2ParB4k)

The 2020 Lincoln Aviator comes with an app that lets drivers use their PHONES as the key that unlocks the doors and starts the vehicle.(https://bit.ly/30rMVUc)

Scientists at the Institute for Biology and Aging have developed a blood test that can predict if you’re going to die in the next ten years. (https://bit.ly/2TW9yOi)

A survey by Airlines For America is predicting that seventeen million passengers will fly through America’s airports over the Labor Day Weekend. (https://bit.ly/2zcHxrU)

FUN FACT FOR YOU:
Share this with your friends... they'll think you're really smart!
Earth Has a Spare Tire. Just like you or me, the planet has a waistline—and it bulges a bit around the middle. Adding to this is the melting ice from Antarctica and Greenland, which adds water to the oceans that are pulled toward the equator.

A Chinese company is launching a mass sale of cloned cats after they successfully cloned a kitten. (https://bit.ly/2ZmijC1)


WEIRD NEWS: Brought to you by WeirdGiftOfTheDay.com
A woman arrested for domestic violence attacked a man in the style of wrestler “Stone Cold” Steve Austin. 23-year-old Chastity Bodnar got into a physical altercation with 26-year-old Coty Lee Havens Saturday afternoon at a residence in Fort Pierce, Florida. Havens said that Bodnar “got upset when he told her that she drinks too much.” Havens said that an “enraged” Bodnar first “threw her phone at him striking him in the throat.” He then walked out of the house and into the attached garage, with Bodnar following. Inside the garage, Bodnar “took two beer cans” and proceeded to “Stone Cold Steve Austin my a--,” Havens said, adding that Bodnar “went crazy on him.” Havens told police that he was forced to pin Bodnar to the ground until officers arrived at the home. “I observed two beer cans in the garage that appeared to be crushed in the general vicinity of where incident occurred,” a sheriff’s deputy reported. The court filing does not reveal whether Bodnar attempted Austin’s famous finishing move, the Stone Cold Stunner. Bodnar was arrested on a misdemeanor battery charge.
(https://bit.ly/2TMOeuv)

A Florida city has issued a citation to a man who landed a helicopter in a friend's backyard as a stunt when he showed up for a party. The city of Coral Springs says Kfir Baranas pulled off the chopper trick in June in violation of an ordinance against unauthorized landings and takeoffs of aircraft. But 41-year-old Baranas is fighting back, arguing that as a licensed pilot he should be allowed to land where he did because he wasn’t flying in restricted airspace. “It’s private property,” he told the paper. “Why should the city prevent that?” Baranas said he dropped in on his friend in a Robinson R44 Raven II helicopter to surprise her on her 45th birthday. The paper reported that neighbors were even more surprised at the sight of the helicopter on their quiet block, with some calling police, who then shut down the street. Baranas has refused to pay the $500 fine and instead is taking Coral Springs to trial in September. (https://fxn.ws/2Z81bVy)
THESE THREE THINGS!
What do these 3 things have in common:
Wedding, Sleigh, Door (Answer: Bell)