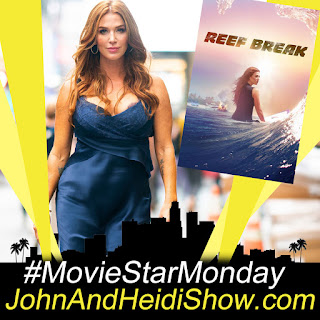 It's a #MovieStarMonday with Poppy Montgomery. She played FBI agent Samantha Spade on the CBS mystery drama Without a Trace from 2002 to 2009, and played Detective Carrie Wells on the CBS/A&E police drama Unforgettable from 2011 to 2016. Her NEW SHOW “Reef Break”, one of ABC’s new summer dramas, airs Thursdays 10/9CT on ABC. The series stars Poppy Montgomery as a former pro-surfer/criminal turned fixer for the Governor of a private island. - https://abc.go.com/shows/reef-break

A study by the University of Guelph found that domestic cats have gotten fatter over the past twenty years. The study does say that domesticated, NEUTERED cats are the ones gaining all the weight. (https://bit.ly/2K2MvNb)

A Texas woman left her infant daughter in a running car while she knocked back shots at a nightclub early Sunday morning, according to police who say the suspect spewed threats and racial epithets when confronted by cops. Around 1:45 a.m. on July 28th, a patrolman was dispatched to the TrackSide Night Club in Copperas Cove, a central Texas city, in reference to a “1-year-old child left inside a vehicle.” The responding officer spotted the child asleep in a safety seat in the rear of a 2009 Buick Limited, which was unlocked. The cop then went inside the nightclub and located the child’s mother, 26-year-old Samantha Grace Vaughan, who initially claimed that she “only went inside to pee.” In an arrest affidavit, the officer noted that Vaughan smelled of booze. When asked if she had consumed any alcohol, Vaughan reportedly copped to drinking two shots. While en route to police headquarters, Vaughan allegedly made a series of threats against the arresting officer and used multiple racial slurs. She was charged with child endangerment, resisting arrest, and making terroristic threats to a public servant.(https://bit.ly/2MsBabU)

BIG SCREEN-LITTLE SCREEN: Brought to you by ChannelSurferTV.com
The “Orange is the New Black” cast recently reacted to the show’s final season and talked about the importance of diversity on TV. (https://fxn.ws/2GDVqni)

Robert De Niro is in talks to star in Martin Scorsese’s “Killers of the Flower Moon,” where he’ll play a vicious killer. (https://bit.ly/2YxXkfl)

A video has gone viral of a boat catching fire in Florida. It’s unclear what started the blaze, The owner fled with a mystery woman. Two million people have watched video of the burning boat. (https://bit.ly/330TY7Z)

Panda Express is now selling its “Sichuan Hot Chicken” nationwide. Up until now it was only available in a limited number of places.(https://bit.ly/2yqej8S)

On this day in 1863, American Industrialist Henry Ford was born in Dearborn, Michigan. He lived to be 84-years-old. (https://ubm.io/2SY9Cg1)

The makers of Pabst Blue Ribbon Beer are now selling a “HARD COFFEE” alcoholic beverage. Each one is spiked with caffeine so you’ll have more energy.
A case of the caffeine and coffee booze will SET YOU BACK $14.99.
(https://n.pr/2yehUqh)

According to a startling new study, the majority of U.S. packaged food is ultra-processed. (https://bit.ly/2Kap0Sb)

FUN FACT FOR YOU:
Share this with your friends... they'll think you're really smart!
Foreign accent syndrome is an actual disorder. This speech disorder, which can occur after traumatic brain injury or stroke, is when a person’s way of speaking shifts from a native accent to a foreign one. Among the cases identified are American English to British English, Japanese to Korean, British English to French, and Spanish to Hungarian.


WEIRD NEWS: Brought to you by WeirdGiftOfTheDay.com
A professional surfer in Florida was injured Saturday when a shark bit his elbow, leaving him bloody and with deep tooth marks. According to WJXT, surfer Frank O'Rourke was surfing at Jacksonville Beach around 3:30 p.m. when the shark latched onto his arm, knocking him off his board. O’Rourke’s friend RJ Berger saw the incident happen. He said O'Rourke was treated by a lifeguard but did not go to a hospital, even though Berger said he thinks his friend could have used a stitch or two. Berger stated, “He immediately went to the bar, because he was like, 'Hey, I got bit by a shark.’ And people were like, 'I'll buy you drinks.' So, he hung out at the pier.” A surfer himself, Berger says it won't stop him from hitting the waves.“It's inevitable, it's going to happen,” Berger said. “It's happened to a couple of my friends. It doesn't bother you, but I mean, if it's gonna happen, it's gonna happen. There's nothing much you can do to really stop that, so try not to worry about it.”(https://bit.ly/2JZTBmy)

A traveler flying out of a Maryland airport packed a missile launcher from Kuwait in his checked bag in the hopes of keeping it as a souvenir. Transportation Security Administration agents at Baltimore/Washington International Thurgood Marshall Airport spotted the inert missile launcher in a Jacksonville, Texas, man’s checked bag. TSA spokesperson Lisa Farbstein said tweeted, “@TSA officers at @BWI Airport detected this missile launcher in a checked bag early this morning. Man said he was bringing it back from Kuwait as a souvenir. Perhaps he should have picked up a keychain instead!” According to a TSA press release, Police questioned the traveler, who explained he is an active duty military member, and allowed him to catch his connecting flight. The missile launcher was confiscated.(https://nyp.st/2Mv8TSh)
THESE THREE THINGS!
What do these 3 things have in common:
KFC—A STEAM SHOVEL—PHONE COMPANY TRUCKS
(They all have BUCKETS)