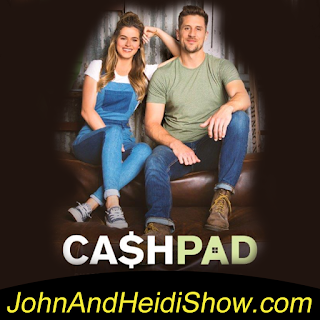 “Cash Pad” Premiered Thursday, July 25 at 9PM ET/PT
JoJo Fletcher and Jordan Rodgers, the engaged break-out stars of “The Bachelorette,” are also experienced house flippers. In this eight episode series, the dynamic couple partner with homeowners in Dallas, Austin, and Phoenix who are in serious need of extra income and hoping to turn their properties into thriving short-term rentals. Whether they’re transforming a decrepit shipping container, a rundown airstream, or a garage in disrepair, JoJo and Jordan are up for the task of creating one-of-a-kind vacation hot-spots that will provide a life-changing financial boost for their homeowner partners. Produced by Electus with Chris Grant, Drew Buckley, Tim Puntillo, Craig Plestis and Ming Lee Howell as executive producers. Jim Ackerman and Marshall Eisen are the executive producers for CNBC.

A YouGov poll found that 20% of Millennialls have no friends.
( https://cutt.ly/j6RlDn )

A Maryland woman is accused of punching two lifeguards as they tried to stop a fight. The Daily Times of Salisbury reports 23-year-old Jennifer Cameron is charged with second-degree assault in the July 7th fight. Charging documents say Cameron and two men began causing a disturbance on Ocean City Beach and beach patrol members intervened. The documents say the three were angry that they were approached while a nearby family with a “naked baby” was left alone. Court documents say the fight reportedly started when a member of the nearby family threw sand at Cameron. They say the lifeguards attempted to stop the fight and Cameron punched them in the face. Cameron later told police that she had been drinking and thought the guards were going to fight her.
(https://nyp.st/2OuaJoV)

Hobbs & Shaw was the big winner at the weekend box office, though the action flick starring The Rock and Jason Statham came up a little short of the expected $65 million to $70 million opening weekend prediction.

SCOOP OF THE DAY: Brought to you by BetterCreditCards.net
A video of a Vermont man who walked into a convenience store completely naked and bought a cup of coffee for $4.99 has gone viral. Technically speaking, it’s not illegal to be naked in public in the state of Vermont. The man left without incident but the cashier still called the cops. (https://7ny.tv/2ZpTC8R)


A Colorado trucker used a Gatorade Bottle as a tail light after his bulb broke.
The cops didn’t even give him a ticket. (https://cbsloc.al/313u15U)

Oscar Meyer announced that it has created an ice cream that includes bits of hot dog and spicy mustard.

A man in China delivered his baby at home by following over-the-phone instructions from emergency personnel.

Double Tree Hotels are sending a tiny oven to the International Space Station so Astronauts can bake cookies.( https://cutt.ly/26RhqB )

A Portland woman was arrested on Saturday after she beat a police officer with his own baton. ( https://cutt.ly/M6RbMw )
A Las Vegas pizza restaurant is now making “Grasshopper Pies” after the city was swarmed by a biblical amount of grasshoppers last week. Each slice sells for five dollars and eight cents. People are freaking out online because people are eating grasshoppers in Vegas. ( https://cutt.ly/V6RQoh )


FUN FACT FOR YOU:
Share this with your friends... they'll think you're really smart!
Whispering is bad for your voice. It might seem like whispering can help you preserve your vocal cords, whether you’ve got laryngitis or are auditioning for American Idol. But researchers have found the opposite to be true. A 2006 study published in the Journal of Voice used a fiber-optic scope on 100 subjects while they counted from one to 10 (first in a normal voice, then a whisper). Researchers found that 69 of them put more strain on their vocal cords when they whispered.


WEIRD NEWS: Brought to you by WeirdGiftOfTheDay.com
Authorities say that an Amazon delivery driver stole a family’s dog in Texas and then tried to sell the pooch online for as little as $70. 22-year-old Mycah Keyona Wade surrendered to deputies in Parker County on July 16th after Amanda and Anthony Phillips reported that their 2-year-old dachshund named RJ was stolen from their front yard in Brock over the July Fourth holiday weekend. Parker County Deputy Danie Huffman told the newspaper that Wade and her boyfriend were dropping off packages for the internet giant on July 5th when they spotted the pup. Wade hopped out of a van and grabbed the dog. A landscaper working nearby pointed to the couple’s home when Wade asked who owned the dog, but she and her boyfriend left with the family pet instead of leaving him there. Wade and her boyfriend, who was not charged in the incident, allegedly were caught taking the dog on a neighbor’s doorbell security camera after RJ earlier had escaped from the couple’s home and run away. Wade was working as a contract driver for Amazon at the time and has confessed to the theft. Both she and her boyfriend have since been fired. (https://nyp.st/2GAEVIt)

A comedian at a small San Francisco venue was attacked by an audience member who was told to “stop talking” during the victim’s performance Saturday afternoon. The July 27th assault was recorded by a camera inside Mutiny Radio, a performance space in the city’s Mission district that also houses a community radio station. At the close of a two-hour open mic session, the comedian Capital Pilcrow was on stage when he briefly exchanged words with an audience member. The comedian told the man--who appeared to have been conversing with a female acquaintance during Pilcrow’s set--“I do know who you are, so shut, stop talking.” The audience member then jumped out of his chair and attacked Pilcrow, who was knocked off stage and punched several times. While being restrained by other patrons, the man began yelling. As the attacker was being shoved out the front door, he broke a window that will cost $500 to replace. Pilcrow and others injured during the melee have, so far, declined to press charges against the assailant. (https://bit.ly/2yDvqEl)

THESE THREE THINGS!
What do these 3 things have in common:
Butter, Brittle, Oil (Answer: Peanut)

GOOD NEWS: Brought to you by BetterCreditCards.net
She Used Metallica To Scare Off A Cougar, Then Gets A Call From James Hetfield