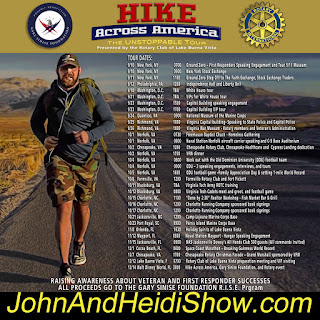 Today we visit with Tshane Johnson, Marine Veteran, best-selling author of “Keep Your Feet Moving" & motivational speaker. He was once homeless, used the Wifi from Dunkin' Donuts to build businesses, he died three times. His inspirational story of how he completely turned his life around is amazing, but he's ALSO the guy who from Hike Across America (kicked off in NYC on 9/11) All proceeds from Hike Across America will benefit the Gary Sinise Foundation’s R.I.S.E. program, which is building specially adapted smart homes for our most severely wounded heroes. https://www.garysinisefoundation.org/rise/

His goal is to raise $1 million for the Gary Sinise Foundation’s R.I.S.E. program which builds smart homes for our severely wounded heroes.

More info and books at www.HikeAcrossAmerica.com

A study in Forbes Magazine claims that sleeping naked will make you healthier and wealthier.(https://bit.ly/2lPukSB)

According to an arrest report, while under arrest in the rear of a police car, a handcuffed Florida couple removed their clothes and began having sex, an encounter that eventually was interrupted when a sheriff’s deputy “opened the door to stop them.” Around 11:40 p.m. Friday, a cop stopped a man and woman who were riding bicycles with no lights on a street in Fernandina Beach, a city outside Jacksonville. While questioning the suspects--35-year-old Megan Mondanaro and 31-year-old Aaron Thomas--a patrolman noted that they each smelled of booze, had bloodshot eyes, and slurred speech. Mondanaro, who declined to perform field sobriety tests, was busted after the deputy concluded she was cycling while impaired. “Megan was arrested and placed in the backseat of my patrol vehicle,” Officer Mark Hunter reported. The cop then turned his attention to Thomas, who was subsequently arrested after he performed poorly on some sobriety tests and showed “signs of impairment.” While Hunter was outside his squad car waiting for a vehicle to transport Mondanaro and Thomas to jail, “Megan and Aaron took their clothes off and started to have sex.” Mondanaro, who is locked up in lieu of $12,508 bond, has been charged with DUI, resisting officers, exposure of sexual organs, and engaging in lascivious acts. Thomas, who is being held without bond, faces similar charges. (https://bit.ly/2mluQbl)

BIG SCREEN-LITTLE SCREEN: Brought to you by ChannelSurferTV.com
Kim Kardashian revealed that her family is thinking about moving to Jackson Hole, Wyoming. (https://pge.sx/2lRB8zf)

Peter Webber, who became known as “Pilot Pete” on “The Bachelorette,” will now become the next Bachelor. (https://bit.ly/2lWecPe)

Former White House Press Secretary Sean Spicer failed to impress the judges during his debut on “Dancing With The Stars.” Lamar Odom was considered by most people to be the worst dancer. (https://bit.ly/2kpvnIE)

Sean Spicer continues to be mocked for his appearance on “Dancing With The Stars.” (https://cnn.it/2lXwAHD)
SCOOP OF THE DAY: Brought to you by BetterCreditCards.net
The International Community is worried about the growing military threat caused by unmanned drones. (https://yhoo.it/2kOwIc0)

The newest AirBus Planes will come equipped with technology that will track whenever a passenger goes to the bathroom. (https://bit.ly/2kPbjQ4)

A Mississippi man who was dressed as Captain America was busted for robbery after breaking into a shed. The judge set bail at $25,000.(https://fxn.ws/2kPapTG)

A Miami swingers club was ordered to pay a group of models for using their pictures in advertisements without their permission. The models will get $1 million dollars. (https://bit.ly/2kRQofh)
The U.S. Navy confirmed that three UFO videos, which surfaced over the summer, are real and that they never should have been released to the public.
The Navy says that they don’t actually know if these are Flying Saucers, or any form of Alien Aircraft for that matter. They’re just saying they’ve never seen objects like this before. Which is a BROAD category.(https://bit.ly/2m15WNO)

FUN FACT FOR YOU:
Share this with your friends... they'll think you're really smart!
Faking Happiness can hurt your health. They did a study of bus drivers. When they put on a happy face to appear happy, when they are not happy, their health deteriorates.

A robot that cleans floors and tells jokes is now patrolling the National Art Gallery in Singapore. (https://bbc.in/2kTeohX)


WEIRD NEWS: Brought to you by WeirdGiftOfTheDay.com
A New Zealand advertising executive facing the bleak prospect of being fired decided to inject a bit of humor into the situation, bringing a professional clown to his final meeting instead of a colleague for emotional support. Josh Thompson, a copywriter for ad agency FCB New Zealand and a budding comedian, revealed he had spent $200 to hire the clown, dubbed Joe, after getting an email from superiors asking to meet to “discuss your role.” The clown subsequently blew up balloon animals and even mimed crying when Thompson was handed his layoff paperwork. Explaining his decision on Facebook, Thompson, who had been in the role since April, wrote: “A while ago, I got a job. A short while later, I lost it. For anyone who hasn’t been fired, what happens is they schedule a serious meeting and advise you to bring a ‘support person.' Sensing the bad news, I decided I’d need the best support person available, so I spent $200 to hire a clown.” (https://fxn.ws/2kLoFg5)

Police arrested a man after he set fire to the mulch at a Nashville KFC in an attempt to keep away mosquitoes. The staff at the Jefferson Street Kentucky Fried Chicken called police after Odell Crump started a fire using mulch outside the restaurant and refusing to leave the property. Crump was allegedly causing a scene when police arrived and refused when officers told him to leave the KFC. At that point, a crowd of people had gathered around the man as he screamed obscenities at “all persons around him.” Crump told police he started the fire to keep away the mosquitoes. Crump was charged with reckless burning, disorderly conduct, and trespassing. He’s being held in the Davidson County jail on a bail of $1,000. (https://bit.ly/2m7v2KZ)
THESE THREE THINGS!
What do these 3 things have in common:
AIR – OIL – COFFEE (Filters)