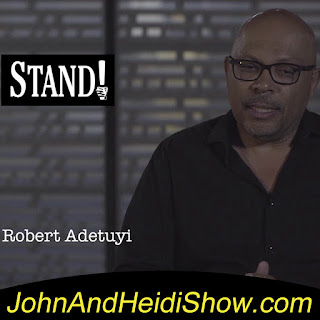 Today we talk with Director Robert Adetuyi (Stomp the Yard, Bring It On) about his new film STAND! This film transports us to Winnipeg,1919 in the grips of violent anti-immigrant riots and a general strike that altered the course of history. STAND! follows Ukrainian immigrant Stefan, smitten with his Jewish suffragette neighbor, Rebecca, but family and anti-immigrant veterans oppose the would-be Romeo and Juliet. When a movement develops to better the lives of immigrants, Stefan, Rebecca and a city of immigrants take on the halls of power in an inspirational, but high stakes, final stand.
https://www.facebook.com/StandMovieMusical
https://www.instagram.com/standmovie/
https://twitter.com/stand_movie
http://stand-movie.com/

A new study found that 48% of American school children think humans will live on Mars in their lifetimes. (https://bit.ly/2kKBKpW)

An Armstrong County man suspected of driving under the influence Wednesday in New Kensington told police he tried to run away because he was wanted on a warrant, but was “too fat” to get away. Now, 31-year-old Danial James Hilton Dopson faces charges of aggravated assault, resisting arrest, escape, driving under the influence, drug possession, and traffic violations. He remained in Westmoreland County Prison on Thursday after failing to post $50,000 bond. New Kensington police Officer Jerry Hobeck said that, after a vehicle pursuit of Dopson, he drew his gun and told Dopson to get on the ground. Dopson eventually complied. However, as Hobeck went to arrest Dopson, he got up and tried to run. Hobeck was able to arrest Dopson after a brief struggle. According to the complaint, Dopson had an “overpowering odor of alcoholic beverage emanating off his breath and his speech was slow and slurred.” Dopson allegedly told police, “I tried to run, but I realized I was too fat.”
(https://bit.ly/2kBPsM1)

The stripper-drama “Hustlers” was tops at the Box Office this weekend, taking in thirty three million dollars in its debut. (https://bit.ly/2lNzjDj)

SCOOP OF THE DAY: Brought to you by BetterCreditCards.net
A health survey revealed that 40,000 Americans died from Obesity in August.
In any event, they’re hoping to turn it around in September, but there’s a fat chance of that happening. (https://bit.ly/2lW0aNA)

A study from Smart Growth America found that Orlando is the most dangerous place to walk because of car hits. Five thousand pedestrians got hit by cars in Orlando last year. (https://bit.ly/2lVK7zh)

Two people were injured after a car plowed into the Trump Plaza in New Rochelle, New York. (https://cbsloc.al/2kSiZkD)

New York City is allowing one million students to skip class on Friday so they can participate in a climate change summit.(https://bit.ly/2lYY8Mu)

A female assassin who worked for El Chapo and was dubbed “the Kim Kardashian of hitmen” has been found dead in her lover’s bed.
(https://bit.ly/2kGycFu)


WEIRD NEWS: Brought to you by WeirdGiftOfTheDay.com
Authorities in Texas are on the search for a bank robber they have dubbed the “Mummy Marauder.” The robbery took place on Friday the 13th at the First Convenience Bank in Harris County. The FBI in Houston described the suspect as a black male in his early 20s standing about 5’11.” The FBI said that the suspect wrapped white gauze around his face and arms. He also wore a wig and baseball cap. The FBI released images on Tuesday of the “mummy” robber in hopes the public could help identify him. Crime Stoppers of Houston is also offering a reward for up to $5,000 for information leading to the arrest of the “Mummy Marauder.” (https://bit.ly/2lVINMS)

A transatlantic flight was forced to divert to the Republic of Ireland because a pilot spilled a cup of coffee on the aircraft's controls. According to the Air Accidents Investigation Branch, the Airbus A330-243, operated by Condor, was traveling from Frankfurt in Germany to Cancún in Mexico on February 6th when it was forced to jettison fuel and divert to Shannon airport. The 49-year-old pilot, who has over 13,000 hours of flying experience, had been given a cup of coffee without a lid by cabin crew and accidentally knocked it over as the plane was flying over the North Atlantic Ocean, carrying 11 crew and 326 passengers. Some of the liquid spilled onto the audio control panel, which became very hot and produced smoke and a burning smell. The damage caused “significant communication difficulty for the flight crew,” and forced them to wear oxygen masks. The equipment became so hot that one of the buttons on the control panel began to melt, which prompted the pilot to divert. The Air Accidents Investigation Branch said there were no injuries and that the airline had since changed its procedures to ensure cup lids are provided for flights on all routes.
(https://bit.ly/2lW4nAF)