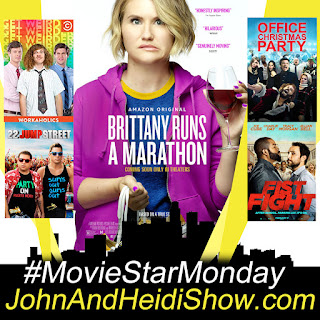 It's a #MovieStarMonday with Jillian Bell from Workaholics, 22 Jump Street, Fist Fight, Office Christmas Party and many others. We will talk about her NEW FILM Brittany Runs a Marathon. This excellent movie is getting a bunch of positive attention. She underwent a huge transformation herself while filming the movie, based on a true story of a young lady who made positive changes in her life and ran the NYC Marathon.
https://www.brittanyrunsamarathon.movie/

A new study found that spending time with friends everyday will lower your risk of getting dementia.(https://bit.ly/2lJkth7)

A Connecticut woman was arrested on Saturday for driving while intoxicated and headed to the liquor store shortly after where she was arrested again for the same crime. 64-year-old Ellen Needleman-O’Neill crashed a 2012 Lexus sedan into a parked car at around 2:30 p.m. and police said that they could smell alcohol on the woman’s breath. Needleman-O’Neill then failed a field sobriety test and a later test showed that she had a blood alcohol level of .23 — nearly triple the legal limit. She was charged with DUI and possession of a controlled substance for a pain killer that was discovered inside her purse. Six hours after being released, Needleman-O’Neill headed to a liquor store. Cops pulled her over and brought her to the station house where she her blood alcohol level at that time was .09 — still above the limit. She is scheduled to appear in court on September 17th. (https://bit.ly/2k7Iz4E)

Kevin Hart was released from the hospital after getting into a spine-breaking car crash two weeks ago. (https://pge.sx/2khlqNp)

Mike “The Situation” Sorrentino was released from prison for tax evasion.
(https://pge.sx/2kJ3smW)

A report by the Daily Star says the U.S. Government has been monitoring snake-like UFO’s that have been flying across the country. (https://bit.ly/2lJl9TH)

A Chinese woman who was trying to record people at Mar A Lago has been convicted of trespassing.(https://hrld.us/2lScG0l)

Miller-Coors is teaming up with “La Colombe” to make a hard brew coffee with 4.2% alcohol. (https://bit.ly/2k9AAUG)

A Florida woman was banned from Disney World for life after she slapped a man who wouldn’t give her a cigarette.(https://fxn.ws/2keij8O)

Police in Venice Beach California arrested a fugitive who tried to get away by running into the ocean. The incident happened right past the Venice Beach Skate Park. (https://cbsloc.al/2m77YvV)


A Florida psychic was sentenced to three years in prison for swindling a woman out of $1.6 million dollars. (https://bit.ly/2lQT5h2)

FUN FACT FOR YOU:
Share this with your friends... they'll think you're really smart!
In Switzerland it is illegal to own just one guinea pig. This is because guinea pigs are social animals, and they are considered victims of abuse if they are alone.

Researchers in Italy now believe that the five-thousand-year-old human fossils known as “The Lovers of Modena” were both men. The fossils were holding hands, which is why they’re called “lovers.” (https://bbc.in/2kwyM8J)


WEIRD NEWS: Brought to you by WeirdGiftOfTheDay.com
According to a report, a Pennsylvania couple is accused of theft after going on a shopping spree with $120,000 that was mistakenly deposited into their bank account. Robert Williams and his wife, Tiffany Williams, appeared in court last Tuesday after they spent two and a half weeks blowing through most of their accidental windfall on expenses such as cars, bills, and a camper. 36-year-old Robert and his 35-year-old wife were arraigned on charges of theft and receiving stolen property. State police said BB&T Bank deposited the dough into the couple’s account on May 31st due to a clerical error by a bank teller. But by June 19th, the pair had spent six figures on purchases that included an SUV, two four-wheelers, and a car trailer. They also allegedly used the money for bills, car repairs, cash purchases, as well as gave $15,000 to friends. On June 20th, the bank contacted Tiffany about the mistake — and to notify her that the money had been taken out of the account, resulting in a $107,416 overdraft fee.
(https://bit.ly/2lGERQ5)

This is one spy camera 007 would never want from Q. A convicted sex offender has been jailed for putting a hidden camera in the women’s toilet at the movie studio where James Bond is being filmed. 50-year-old Peter Hartley used a motion-triggered miniature camera in a grill above the cubicle in Britain’s Pinewood Studios. The maintenance worker is thought to have filmed at least thirty women before it was discovered in June by a female crew member of “No Time to Die,” the 25th Bond movie currently being shot there. The woman, whose identity wasn’t released, saw a shining light and used a screwdriver to remove the grill cover and find the camera, with Aylesbury crown court hearing that the discovery left her suffering from panic attacks. Hartley, a Londoner who has a slew of similar convictions, admitted voyeurism and was on Friday jailed for sixteen months. Judge Francis Sheridan called him “a disgusting individual” as he also ordered him to be listed on the sex offender’s registry for ten years. (https://bit.ly/2m8JZN5)
THESE THREE THINGS!
What do these 3 things have in common:
PEPPER--SQUASH--CHESS?... (Games)