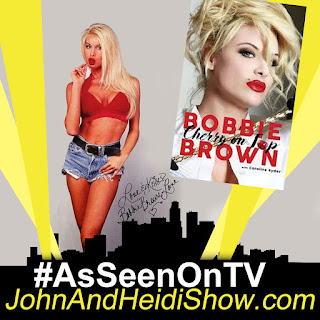 Today we visit with Bobbie Brown an actress, comedian and model, best known as the girl from Warrant's "Cherry Pie" music video and her tumultuous marriage to lead singer Jani Lane. In 2011, MSN.com featured Bobbie in the list of the top ten “women who’ve broken the most hearts in rock music.” Bobbie's first memoir Dirty Rocker Boys came out in 2015 and was a New York Times bestseller.

An MTA survey found that New York City has had over 1,600 incidents of people pooping on Subway cars this year. (https://bit.ly/2kFzgsT)

A sloshed Arizona mommy didn’t know best — but at least her “heroic” young daughter did. The 10-year-old girl took video of her mother — and then called cops in Glendale to report that the elder was too drunk to drive home from a Saturday screening of “The Lion King.” 31-year-old Stephanie Davis of Glendale was busted on suspicion of aggravated DUI after her daughter called police and showed cops footage of her behind the wheel as three children under the age of 15 screamed for her to stop driving. Cops found Davis reeking of alcohol and with bloodshot, watery eyes, as well as a flushed face and slurred speech. She was also so unsteady on her feet that she had to be supported by officers when she walked and fell down as she got out of a police vehicle. Davis, who refused to take field sobriety tests, had a blood sample taken after a warrant was issued. She was released on her own recognizance and is expected back in court on Sept. 23rd. (https://bit.ly/2ksHEfw)

Newly released emails show that Harvey Weinstein’s accuser sent him dozens of affectionate messages in the weeks and months AFTER she claims he sexually assaulted her. (https://pge.sx/2k7rtnt)

Hollywood insiders say Jennifer Lopez could be in the Oscar running for her performance in the movie “Hustlers.” (https://bit.ly/2lJvS0m)

SCOOP OF THE DAY: Brought to you by BetterCreditCards.net
The makers of White Claw revealed that the company is running low on supplies of spiked seltzer. (https://bit.ly/2lNjVXo)

A new study claims that a growing number of millennials are drinking more because they’re becoming parents. (https://bit.ly/2m2JxQe)

Worshipers in Chicago are flocking to a church on the west side whose Virgin Mary statue appears to be crying. (https://abc13.co/2lFEmWl)

California has approved a law that would allow college athletes to make endorsement money. Some people argue that college players shouldn’t be paid because they get their education for free. (https://nyti.ms/2kpaxct)

A video of a race car flying fifty feet in the air in Italy has gone viral. A lot of people are blaming the condition of the track for the crash.
(https://bit.ly/2mazmt7)

Microsoft founder Bill Gates is denying a report that he donated $2 million dollars to MIT through pedophile Jeffrey Epstein. (https://bit.ly/2kt8Drm)

A French Judge ruled that a married man who died while having sex on a business trip was the victim of a workplace accident. Under terms of the ruling, the man’s family is now entitled to workers compensation. (https://bit.ly/2kFrPCb)


WEIRD NEWS: Brought to you by WeirdGiftOfTheDay.com
According to the mayor, a Maryland man was arrested last week after he allegedly rammed his truck repeatedly into the local City Hall building — because the city turned his water off after he didn't pay his bill. The man was hit with a slew of charges after the incident, which took place in Taneytown, a city roughly fifty miles northwest of Baltimore. Witnesses told police the man “struck the building multiple times" with his truck on purpose — an action Mayor Bradley Wantz described as "nothing less than a terroristic attack on the city.” Bernice Nunnally said she thought the driver “passed out because the first time he ran in he put his head down on the steering wheel.” “I proceeded to walk to the truck and say, ‘Sir, are you okay?’ and that’s when he told me to get the f--- away from his truck and these people want his effing life.” City Hall was closed because of the incident. The driver was charged with second-degree assault, second-degree burglary, reckless driving, and malicious destruction of property, among other offenses. (https://fxn.ws/2kzVOvd)

In West Virginia, Fayette County Sheriff’s Office deputies have charged a 44-year-old pastor’s wife with wanton endangerment after she allegedly fired a pistol in a church parking lot in May. The incident reportedly happened during a heated meeting with the wife of the church youth pastor. Melinda Frye Toney was charged on August 22nd, after police viewed video surveillance that had been taken at New Life Apostolic Church in Oak Hill on May 11th, according to Fayette Sheriff’s Detective Kevin Willis. Several people, including the children of the church’s youth pastor and his wife, were in the parking lot at the time. Willis said that Toney had been in a conflict with 29-year-old Lori Haywood who is married to New Life Apostolic Youth Pastor David Haywood. Willis said the two ministers’ spouses had tension over a “minor conflict” and that an argument over a themed T-shirt that Haywood had worn to an event was “the straw that broke the camel’s back.” Willis said that Toney’s alleged action was an illegal use of a firearm, even though the firearm was legal. (https://bit.ly/2k02qmp)
THESE THREE THINGS!
What do these 3 things have in common:
HUMAN—CONSTITUTIONAL—CIVIL?... (Types of RIGHTS).