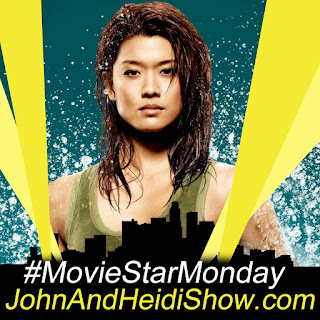 It's a #MovieStarMonday with Grace Park... a fan-favorite for her starring roles on the critically acclaimed series "Battlestar Galactica," in which she played not one, but two leading roles (Boomer and Athena). Her performance garnered her a place in TV Guide's "100 Most Memorable Moments in TV History."

For her seven-season-run on "Hawaii Five-0," Park brought heart, suspense, tragedy and sensuality to the iconic role of Kono Kalakaua
Her new film FREAKS is in theaters next Friday, September 13th
In this science-fiction thriller, a disturbed father (Emile Hirsch) locks his bold 7-year-old daughter (Lexy Kolker) in a house, warning her of grave dangers outside. But the mysterious Mr. Snowcone (Bruce Dern) convinces the girl to escape and join him on a quest for family, freedom, and revenge.
Here's the trailer: https://www.youtube.com/watch?v=Fd2szjVdrpg

An Emerson College Poll found that 34% of Americans think Jeffrey Epstein was murdered, as opposed to 33% who think he actually committed suicide.
(https://bit.ly/2HxYKRc)

According to court records, a woman arrested for drunk driving asked cops if they wanted to place a bet on what she registered on a breathalyzer test. 62-year-old Mary Westerlund was nabbed late Monday evening near her home in Florida's The Villages retirement community. Cops approached Westerlund’s Acura after receiving a report of a “drunk female being present at the Fire Station.” Cops say that Westerlund was impaired and had “bloodshot glassy eyes and heavily slurred speech.” As she screamed at a sheriff’s deputy, the officer detected “the strong odor of an alcoholic beverage coming from her breath.” Westerlund, who was convicted of drunk driving in 2015, estimated that she “would blow a .190 BAC.” The Intoxilyzer operator--who did not accept the two-bit offer--subsequently had Westerlund provide samples that registered her BAC at .229 and then .210. Westerlund was charged with drunk driving and resisting a police officer, both misdemeanors. (https://bit.ly/2Z7lC4Q)

Leonardo DiCaprio’s foundation has pledged $5 million in aid for the Amazon Rainforest. (https://pge.sx/2ZvmsDU)

SCOOP OF THE DAY: Brought to you by BetterCreditCards.net
The Hasbro toy making company has acquired “Death Row Records” in a deal with a British media company that produces Peppa Pig. (https://bit.ly/30ztPLR)

Opera Star Placido Domingo got a standing ovation as he took the stage in Austria for his first concert since nine women accused him of sexually harassing them. (https://bit.ly/2ZsnapG)

A mistake by workmen in England got some laughs after they misspelled the word ‘bus’ on a road. “Bup stop” was painted in large yellow lettering.
https://www.mirror.co.uk/news/uk-news/bungling-workmen-spell-bus-wrong-4103963

A doctor in Vietnam has shared video of what he pulled out of a patient’s ear. The man had been experiencing pain in his ear canal and the doctor used a small camera to uncover the cause. The man had a large bee burrowing inside his head.


FUN FACT FOR YOU:
Share this with your friends... they'll think you're really smart!
There Are Parts of Earth With Less Gravity Than Others. Because of the uneven shape of the globe, the planet’s gravity is unevenly distributed, too, so some parts of the planet have been found to have lower or higher levels of gravity than others. Canada’s Hudson Bay, for example, was found to have lower gravity due to a massive ice sheet that “dented the earth 10,000 years ago, literally bending gravity” as one newspaper put it.

A video of an Italian Helicopter Crew airlifting a cow to safety after it fell off a cliff has gone viral. (https://yhoo.it/2Lci1ZE)


WEIRD NEWS: Brought to you by WeirdGiftOfTheDay.com
A Southern California man who smuggled $11 million worth of erectile dysfunction drugs into the U.S. from China has been sentenced to more than eight years in federal prison for conspiracy and smuggling contraband. Prosecutors say the drugs sold by 41-year-old John Lee of Walnut were dangerous black-market creations falsely advertised as herbal remedies, and some customers suffered permanent injuries. Lee also was ordered Monday to pay $550,000 in restitution to victims. Prosecutors say from 2011 to 2017, Lee illegally imported powdered tadalafil — the active ingredient in the prescription drug Cialis. Lee made 5½ million pills, some containing 14 times the level of the drug found in Cialis. He pleaded guilty in February. More than a dozen other associates and companies have pleaded guilty to conspiring with Lee.
(https://lat.ms/3239O0u)

Driving a car filled to the brim with colorful balloons and the lights out, a New Hampshire man allegedly led police on a chase through three towns before smashing the vehicle into his own garage. 20-year-old William Riley was arrested following the unusual vehicle pursuit early last Thursday morning. The incident began about 3:30 a.m. when authorities received a report of a hazardous operator traveling northbound. The driver, Riley, was allegedly operating the vehicle without headlights on at the time and the car was packed with balloons. “I believe they were balloons. There were quite a few of them,” said state police Lt. Bryan Trask. Police attempted to stop the vehicle, but Riley allegedly failed to pull over and instead increased his speed in an effort to elude police. “A brief pursuit ensued until the operator arrived at his residence in Bedford. Upon pulling into his driveway, the operator lost control, crashed into his own garage and attempted to flee into his house,” police said in a statement. Riley was arrested and charged with reckless operation, disobeying an officer, and several other motor vehicle violations. (https://bit.ly/2HHqe7l)
THESE THREE THINGS!
What do these 3 things have in common:
STEREOS--GRADUATIONS--THE HOUSE OF REPRESENTATIVES
(They all have SPEAKERS)