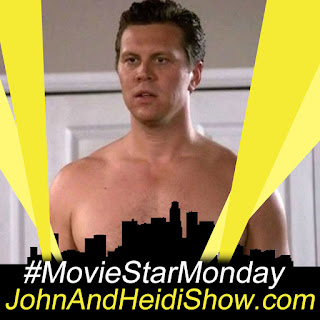 It's a #MovieStarMonday with Hayes MacArthur a stand-up comedian, actor and writer. From LIFE AS WE KNOW IT, SHE¹S OUT OF MY LEAGUE, THE BREAK-UP, MERRY HAPPY WHATEVER, SUPER TROOPERS 2. He's staring in a new digital series Mr Mom on Vudu, Walmart’s streaming platform. Based on the 1983 hit comedy film Mr. Mom For more information, visit www.vudu.com/aboutus

SURVEYS, STUDIES & SUCH: Brought to you by BetterCreditCards.net
A survey by the University of Pennsylvania found that 1 in 5 Americans can’t name a single branch of the Government.(https://bit.ly/2lSmVlG)
BRAIN ON DRUGS:
Brought to you by TimeForRehab.com! Each day we talk about people doing dumb things under the influence, but addiction is no laughing matter… if you or someone you know needs help, we're here to help! You can learn more at TimeForRehab.com.

The intoxicated ex-cheerleader who tried to talk her way out of an arrest by assuring South Carolina cops that she was a “very clean, thoroughbred, white girl” has pleaded guilty to a drunk driving charge. 34-year-old Lauren Cutshaw recently copped to a misdemeanor DUI count in connection with her arrest last August in Bluffton, a town just west of Hilton Head. Cutshaw, a licensed real estate agent, pleaded guilty to the drunk driving charge during an August 27th appearance in Bluffton Municipal Court. As detailed in a Bluffton Police Department report, Cutshaw offered police a litany of reasons why she should be spared arrest after being pulled over at 1:45 a.m. for speeding and driving through a stop sign at 60 mph. Cutshaw, who claimed to have only consumed two glasses of wine, told a cop, “I’m a very clean, thoroughbred, white girl” and “I’m a white, clean girl.” She also told of her prior “perfect grades,” National Honor Society membership, and graduation from a “high accredited university.” (https://bit.ly/2kQZCbt)
BIG SCREEN-LITTLE SCREEN: Brought to you by ChannelSurferTV.com
Jennifer Lawrence and Cooke Maroney have sparked marriage rumors after the two were spotted at New York City’s Marriage License Bureau.
(https://pge.sx/2lVC71n)

The movie based on the hit TV show “Downton Abbey” hits theaters this weekend. (https://bit.ly/2mjezn5)

SCOOP OF THE DAY: Brought to you by BetterCreditCards.net
A female deer was caught on camera dancing in the woods at Yellowstone National Park. (https://bit.ly/2zqQIp4)

A 19-year-old Nebraska girl accidentally set her house on fire as she was trying to burn love letters from her ex. (https://bit.ly/2kIdvcf)

International Weapons Experts are warning that North Korea could have forty nuclear bombs by the end of the year. (https://bit.ly/2kIZ0F7)

Notorious drug dealer Sam Walker has set up a Youtube account inside of a British Prison that now has 19,000 followers. (https://dailym.ai/2mmeL59)

A Whitney Houston hologram tour is slated to kick off in Europe in January of 2020. (https://bit.ly/2lWsnUD)

A Canadian study found that snoring will not make you have a bad night’s sleep. (https://dailym.ai/2kRhkeX)

WEIRD NEWS: Brought to you by WeirdGiftOfTheDay.com
Cops report that a man wearing a Captain America costume was arrested for burglary after a Mississippi homeowner caught the phony superhero breaking into a shed on his property. 36-year-old David Hobbs was collared early last Monday morning as he allegedly tried to use a pipe to break into a shed at the rear of a residence in the city of Clarksdale. Hobbs was thwarted when an alarm alerted the homeowner to the attempted 3:00 a.m. burglary. The victim held Hobbs at gunpoint until police arrived. For some unknown reason, Hobbs was wearing a Captain America costume, complete with mask. His outfit also included fairy wings, apparently for a quick getaway. Hobbs, sans costume, is locked up in the Coahoma County jail on $25,000 bond.
(https://bit.ly/2mgXhat)

A bro pulled over for doing 131 mph in a Lamborghini admitted he was “just showing off.” Officers in Newark, Ohio, could not hide their frustration at the 23-year-old who treated the I-77 like a race track in the early hours last Wednesday. After twice telling him how fast he was clocked speeding, a frustrated-sounding Newburgh Heights officer said, “You know how fast you were going — everybody was honking their horn as you were going by.” The driver then admitted he was “just showing off,” police told the station. He was charged with speeding and reckless driving and is due in court later this month. Police chief John Majoy said of the high speed, “That’s absurd, there’s no other way to describe it. There’s no call for that whatsoever. This is how people get killed.”
(https://bit.ly/2kL8Shq)