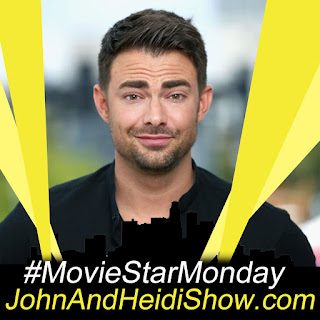 It's a #MovieStarMonday Jonathan Bennett (Mean Girls, Cheaper By The Dozen 2 & many more) his latest film SURPRISE ME! is coming out October 4th.
TRAILER - https://www.youtube.com/watch?v=__CeA7ui9U4

A Wall Street Journal Study found that having pets can bring down the resale value of your home because of people who don’t like the smell or the dander.
(https://on.wsj.com/2nd6osY)

During a traffic stop early Sunday, Jacqueline Hubbard did not hesitate to answer when a Florida cop asked if she “had any drugs on her person.” The 59-year-old Hubbard, who was in the front passenger seat not wearing a seat belt, reportedly told a patrolman that she was in possession of crack cocaine that was stored in what she called her “felony purse.” The purse, which was around Hubbard’s neck, contained two crack rocks, a small baggie of cocaine, and two glass crack pipes. The contents of the “felony purse” resulted in Hubbard’s bust on two criminal charges: possession of drug paraphernalia, a misdemeanor, and possession of a controlled substance, a felony. Hubbard is locked up in the county jail in lieu of $2,150 bond. Court filings do not indicate whether her “felony purse,” or just its contents, was seized as evidence. Hubbard’s rap sheet includes convictions for disorderly intoxication; drunk driving; theft; boating under the influence; trespass; cocaine possession; and violating probation. (https://bit.ly/2kHTfHE)

Nick Cannon announced that his upcoming late night show is no longer in the works. (https://pge.sx/2lUFciF)

Jon Cryer is denying Demi Moore’s claim in her new book that she took his virginity, saying he had already been with a woman by the time they slept together. (https://pge.sx/2laPJ8X)

SCOOP OF THE DAY: Brought to you by BetterCreditCards.net
A company is now selling a “Sexy Beyond Burger” Halloween Costume.
(https://bit.ly/2mM4OOo)

The state of Massachusetts has banned all forms of E-Cigarettes.
(https://yhoo.it/2lM12ED)

A Florida man was arrested for exposing himself to a woman outside of a Target. (https://bit.ly/2msRcHZ)

Baby Archie made his first appearance with Prince Harry and Meghan Markle on their tour of South Africa Thursday. (https://pge.sx/2ni2cZ7)

Scientists at the University of California in San Diego believe they’ve found a “kill switch” for HIV. (https://bit.ly/2n00yLD)

Avon is facing a massive lawsuit for discriminating against women.
(https://bit.ly/2m4CiYx)

CNN President Jeff Zucker is the front runner to take over as the President of Warner Media.(https://nbcnews.to/2nC0DW3)

A Walrus who was defending her cubs actually sank a Russian Military Ship in the arctic ocean. (https://cbsn.ws/2kXL2PJ)


WEIRD NEWS: Brought to you by WeirdGiftOfTheDay.com
A banana thrown at a man’s face prompted a call to Omaha police. Officers were called to Benson Tower shortly before 9:20 a.m. Thursday “in order to investigate an assault with a banana.” A 53-year-old man said he had gotten into an argument with a 23-year-old female resident. According to a police report, the man told police he walked away to de-escalate the situation, but as the elevator doors were about to close, the man saw the woman’s hand “punch through the door, followed by a banana.” The woman threw the banana at the man, hitting him in the face and dirtying his red T-shirt. Officers could “see a small amount of banana smudge” on the man’s shirt, the police report said, but no mark was visible on his face. When police talked to the woman, she told them that she had started arguing with the man because he was trying to throw away items that belonged in the building’s common area. The woman said the man then called her and her baby ugly, officers reported, and he said “she was giving all of his friends STDs.” (https://bit.ly/2mqOFhc)

A man in England suspected of repeatedly calling police and burping down the telephone at the emergency call handler has been arrested. A person called twenty-two times over the past week to belch at staff members of the Cambridgeshire force. The recording of the first few calls - posted by the force last week on Facebook - have been listened to by more than 40,000 people. “This may make you laugh, but for us this is no laughing matter,” police wrote. They warned making unnecessary calls meant “we may struggle to answer calls and deal with genuine emergencies.” A Cambridgeshire Police spokesman said a man was arrested at Peterborough railway station on Tuesday after nineteen burping calls were made to the emergency number within a short space of time in the early hours of the morning. He is currently in custody on suspicion of public nuisance offenses. (https://bbc.in/2mUqSqs)
THESE THREE THINGS!
What do these 3 things have in common:
CHIPS--SPEARS--WHOLE?... (Types of PICKLES)