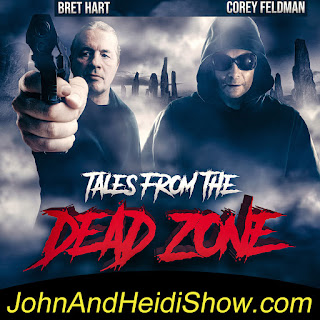 
Today we visit with actor Derek Long. He's currently working on a film called “Tales From The Dead Zone” with Corey Feldman and Bret Hart. This film is expected to come out in 2020.
More info on the film - https://www.imdb.com/title/tt5764650/

The University of Texas conducted a study of MUMMIES and found that high cholesterol was a problem for ancient Egyptians. (https://bit.ly/2lMP6Cy)

A Florida homeowner found two strangers having sex in her yard Monday afternoon, according to cops who arrested the pair on trespass and indecent exposure charges. The Key West woman told police that she initially heard individuals arguing in the side yard of her residence, which is two blocks from the waterfront. When the 52-year-old witness went to investigate the disturbance, she discovered a man and woman having sex against a wall. Officers responding to a 9-1-1 call confronted the couple around 5:00 p.m. as they were lying down in the yard. The suspects, 36-year-old Stephen James Dean and 49-year-old Teresa Ann Behan both smelled of alcohol and appeared intoxicated. Dean and Behan were arrested for indecent exposure and trespassing, both misdemeanors. Behan was also charged with a pair of felonies after she allegedly kicked and punched a patrolman.
https://bit.ly/2lyS1yY

Kim Kardashian and Kendall Jenner continue to be mocked for saying that their show is real during the Emmy’s. (https://bit.ly/2mvrmmu)

Military Commanders in Oklahoma are warning about the potential for violence at the premiere of “The Joker” movie this weekend. (https://bit.ly/2lvh8CK)

The New York Film Festival gets under way this weekend. (https://bit.ly/2ncXCew)

SCOOP OF THE DAY: Brought to you by BetterCreditCards.net
Meghan Markle and Prince Harry danced with well-wishers in Cape Town, South Africa Monday to mark the beginning of their tour of the continent.
(https://dailym.ai/2m1hi4x)

A video of a Colorado Dirt Biker falling off a cliff has gone viral. Ten million people have watched it. Police say he was unhurt because he wasn’t driving fast at the time. (https://bit.ly/2mouIaZ)


A new survey found that one in seven adults in New Orleans has a warrant out for their arrest. (https://bit.ly/2kNzYEz)

Kanye West has been attracting over five thousand people to his Sunday Service in Wyoming. (https://bit.ly/2mwkNQA)

The U.S. Coast Guard has captured a submarine that was hauling $165 million worth of cocaine. (https://bit.ly/2lBs2a7)

This week marks the 30th anniversary of the breeding of the very first Labradoodle. (https://bit.ly/2mFecn5)

FUN FACT FOR YOU:
Share this with your friends... they'll think you're really smart!
If you lift a kangaroo's tail off the ground it can't hop. Kangaroos use their tails for balance whilst hopping, so if you elevate their tail, they would have no balance and fall over.


NEWS HEADLINES.... FROM SOMEWHERE IN THIS WORLD!
An American man died during an under water wedding proposal in Tanzania.
(https://yhoo.it/2l7ewdY)


WEIRD NEWS: Brought to you by WeirdGiftOfTheDay.com
A Las Vegas lawyer is so desperate for help regarding a homeless sanitation issue in downtown Las Vegas, he brought a shovel of human feces to city hall to get the attention of leaders. When attorney Jerry Gillock arrived for work on Sunday at his downtown law firm, he saw something on his front stoop and it was the last straw. “There was a big pile of human feces right on my front steps, on my brick entryway into my building,” said Gillock. Thirteen Investigates first spoke to Gillock in June regarding the on-going homelessness issue around his business in downtown Las Vegas. Gillock described repeated defecation, urination, indecent exposures and sex acts around his business. Gillock says for months he's complained to city leaders and tried every method he could think of to get some action. On Sunday, he decided he needed to do something drastic and nasty. Councilwoman OIivia Diaz says in the coming weeks, an ordinance is scheduled to be introduced to make it illegal to camp or sleep in the public right-of-way, such as a sidewalk, in downtown Las Vegas if space is available at the Courtyard Homeless Resource Center or another non-profit service provider in the Corridor of Hope. (https://bit.ly/2lzFRFL)

Law Enforcement officials have reported that a high school psychologist in Orange County, California, was arrested for having sex with a boy inside a classroom. The suspect, 35-year-old Kristen Lynn Boyle, allegedly had sex with the boy in a La Habra High School classroom in April 2018. Boyle, who worked as a psychologist at the school, was arrested after a lengthy investigation. She was charged with statutory rape. “Mental health professionals wield a tremendous amount of influence over their patients,” Orange County District Attorney Todd Spitzer said in the statement. “This betrayal of trust is even more egregious because she used her position to gain her victim’s trust and then exploited the therapist/patient relationship to prey on one of the very students she was entrusted with helping,” Spitzer added. Boyle faces a maximum of three years if convicted. (https://bit.ly/2mHlJSc)

THESE THREE THINGS!
What do these 3 things have in common:
THE THING--THE INVISIBLE GIRL--THE HUMAN TORCH? (Along with Mr. Fantastic, they are members of The Fantastic Four.)