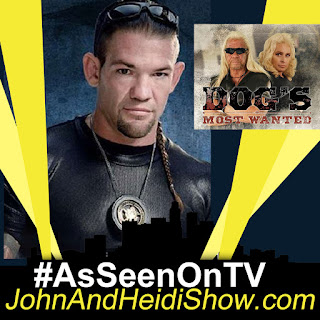 Leland Chapman. (son of “Dog” The Bounty Hunter) is an American bail bondsman and bounty hunter, known as one of the stars of the A&E Network reality television program Dog the Bounty Hunter. He also starred in the Country Music Television television documentary Dog and Beth: On the Hunt.
WGN AMERICA’S HIGHLY ANTICIPATED UNSCRIPTED SERIES "DOG'S MOST WANTED" TO PREMIERED WEDNESDAY, SEPTEMBER 4 AT 9/8C
https://www.youtube.com/watch?v=1p71fXUY6v8&feature=youtu.be

A Pew Poll found that just 19% of Americans qualify as “upper class.” (https://cnb.cx/2kg4eYs)

A New Zealand man who says he downed forty-eight beers before smashing up two cars with an ax and chasing a group of friends during a drunken-rampage has pleaded guilty. 38-year-old Karl Edgar Littlejohn appeared in the Dunedin District Court Wednesday on charges of possessing a weapon and two counts of intentional damage. Littlejohn became “enraged” when a friend arrived with another person to retrieve the Subaru vehicle he let the 38-year-old borrow six months ago. Littlejohn reportedly went home and got drunk before returning to the scene, where he tried to punch his friend. He then got an ax from his Balclutha home and shattered all the windows of the Subaru before striking a nearby Nissan and chasing the victims down a street. After his arrest, Littlejohn told police he had drunk two 24-packs of beer. Littlejohn was sentenced to twelve months of supervision and 150 hours of community service. He was also ordered to pay $963 in damages. He's reportedly been in previous trouble with the law, leading police on two separate high-speed chases.
(https://fxn.ws/2kjq9hp)

The final installment in the “Rambo” series hits theaters on Thursday.
(https://bit.ly/2lYZCq3)

A comedy about Adolph Hitler won the audience award at the Toronto Film Festival.(https://bit.ly/2kEawS7)

SCOOP OF THE DAY: Brought to you by BetterCreditCards.net
46,000 GM workers have gone on strike against the company after contract negotiations hit an impasse Monday. The head of the United Auto Workers Union says they did not take the decision to take a walk out lightly.
(https://yhoo.it/2mcllei)

A Pittsburgh man committed suicide on his daughter’s wedding day by blowing up his own house hours before the ceremony.(https://dailym.ai/2lRnBHW)

A California woman accidentally swallowed her engagement ring after she claims her husband told her to swallow it during a dream. (https://dailym.ai/2kkgEyx)

The New York Philharmonic is using Social Media Influencers to promote its new season in an effort to attract millennials. (https://on.wsj.com/2kkyIJ1)


FUN FACT FOR YOU:
Share this with your friends... they'll think you're really smart!
Snakes can help predict earthquakes. They can sense a coming earthquake from 75 miles away (121 km), up to five days before it happens.

Six-year-old Prince George has invited a few of his classmates for playdates at Kensington Palace but they need to be vetted by security beforehand.
(https://dailym.ai/2mlrfKt)


WEIRD NEWS: Brought to you by WeirdGiftOfTheDay.com
A California woman had to go to urgent care and undergo surgery after removing her engagement ring and swallowing it in her sleep. 29-year-old Jenna Evans was dreaming last Wednesday that she and her fiancé, Bob Howell, were on a high-speed train being chased by “bad guys,” when she swallowed the ring to keep it safe from the villains. Unfortunately, Evans was sleepwalking at the time and gulped the the 2.4-carat diamond ring down with a glass of water. “I popped that sucker off, put it in my mouth and swallowed it with a glass of water right about the time I realized what I was doing,” she remembered. When she discovered the ring was gone the next morning, Evans was overcome with emotion. “I don't think he believed me right away,” Evans said of when she told Howell. “We laughed pretty hard for about an hour and a half,” and then realized they would have to go to the hospital. A gastroenterologist decided to remove the ring with an upper endoscopy. (https://washex.am/2mc44BY)

A new video shows that the driver of a Tesla on autopilot appeared to be asleep behind the wheel while whizzing along a Massachusetts highway. A fellow motorist captured the driver with his head slumped forward — and his passenger equally zonked out — along I-90 on Sunday. Motorist Dakota Randall guessed he and the Tesla were both going about 60 mph through Newton at the time. He said he tried to wake up the daredevil drivers by honking — but “it didn’t work at all,” he told NBC10 Boston. While the autopilot system features advanced safety features, Tesla takes pains to stress that it is “not a self-driving system.” The company states on its website, “Autopilot is intended for use with a fully attentive driver, who has their hands on the wheel and is prepared to take over at any time.” State police told NBC10 Boston they were aware of the incident from media reports but had not been contacted by anyone. In June, another Tesla driver was similarly caught snoozing behind the wheel in the San Francisco Bay Area. (https://bit.ly/2lGk670)

THESE THREE THINGS!
What do these 3 things have in common:
COFFEEMAKERS—INSTAGRAM-CIGARETTES?... (They have FILTERS)