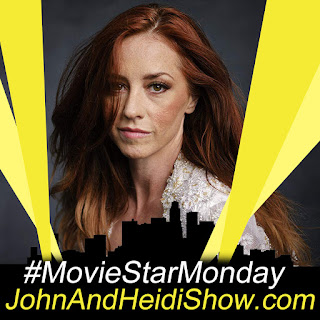 It's a #MovieStarMonday! We talk to actress Tris Marie. She has done several TV shows and is working on a new movie now!https://www.instagram.com/tris.marie/
https://www.imdb.com/name/nm7820775/

A survey shows that people who make more than $75,000 a year are far more likely than those who make $25,000 to say they are “very satisfied” with their lives. But new research shows the data is a bit flawed.

A Florida woman who was previously arrested for burning down a 3,500-year-old tree while smoking methamphetamine was arrested last week on charges of trafficking meth. 33-year-old Sara Barnes was arrested Friday in her Altamonte Springs home after deputies found 38 grams of meth. Barnes was arrested in 2012 for burning down “The Senator”, a 118-foot-tall bald cypress in Longwood, Fla. that was the fifth-oldest tree in the world. Agents said Barnes showed people images of the fire and said: “I can’t believe I burned down a tree older than Jesus.” In her latest case, Barnes is facing a felony charge of trafficking in amphetamine. She was booked at the John E. Polk Correctional Facility on a $25,000 bond. Her next court appearance is scheduled for Nov. 12th. (https://fxn.ws/314Nlza)

Helen Hunt was briefly hospitalized after the SUV she was riding in flipped over on Wednesday night. (https://pge.sx/2MQAVWB)
Megyn Kelly is demanding an outside investigation into NBC after their handling of Matt Lauer’s assault allegations. (https://pge.sx/2MmTwuA)

After being offered a role in The Batman, Jonah Hill has moved on from the project. Why exactly Hill is passing is currently unknown, and insiders say that when the news was initially reported, it was very early in the negotiations and that a deal was far from done. The Batman is scheduled to hit theaters June 25, 2021.

SCOOP OF THE DAY: Brought to you by SingleStudentLoan.com
The USA TODAY announced that it’s phasing out its print edition.
(https://bit.ly/33BneSf)

Dutch police found a father and his six children hiding inside a farmhouse where they’d been waiting for the world to end for the past six years.
(https://yhoo.it/2VRxGT5)

Egyptian Tourism Officials announced that twenty ancient coffins were recently discovered and will go on display to the public. (https://bit.ly/35Ex9bL)

The owners of Jim Beam are renting out their family home as an Airbnb.
Each room comes with unlimited JIM BEAM and they’re taking reservations now. (https://bit.ly/2BheEMu)

North Korean State Television has released footage of Kim Jong-un riding a white horse up a sacred mountain in his home country. (https://tmsnrt.rs/35FpmKM)

Kim Jong-un continues to be mocked online for a series of photos that show him riding a white horse. (https://nyti.ms/2IVxJYW)


NEWS HEADLINES.... FROM SOMEWHERE IN THIS WORLD!
Dateline.... VietnamVietnam has pulled the Dreamworks’ animated film “Abominable” because it showed a map of the South China Sea that was offensive to Chinese state run media. (https://tmsnrt.rs/2MMs20a)

A man in Washington state threatened his roommate with a metal rod because he believed he was a vampire. The 40-year-old suspect from Bremerton accused his roommate of being a blood-sucking vampire and threatened to kill him with the metal rod on Monday. The wannabe Van Helsing then whacked him in the chest with the rod, causing visible swelling. His roommate alerted police and said he feared for his life because the man is larger than him and mentally ill. The man was arrested and charged with felony assault. (https://bit.ly/31o39NR)
MOMENT OF DUH: Brought to you by SingleStudentLoan.com

A seven-year-old boy was caught vaping last week during class at a Wisconsin elementary school. The second-grader, cops say, was spotted by a teacher last Tuesday using a SMOK Novo vaping device inside Country Dale Elementary School in Franklin, a Milwaukee suburb. When questioned by school officials, the boy said that he took the device, which measures about three-and-a-half inches in length, from his mother’s purse. During a police interview, the boy’s mother said that the vaping device contained CBD oil. It is unclear how the child knew how to use the device, which retails for less than $20. The boy was removed from school by child protective services workers who transported him to a local hospital for an examination. The child was subsequently returned to his mother’s care. School administrators, however, took the opportunity to email parents to express their “concern about the national vaping epidemic.”
(https://bit.ly/2BjgpZv)
FAKE NEWS.... OR FLORIDA?!
I read a headline and Heidi (and you) need to guess if the story is FAKE NEWS or something that really happened in the state of FLORIDA.
A Pensacola Man became an internet celebrity after his GIANT NECK made him the subject of a million jokes on Social Media ….. FLORIDA (https://abc7.ws/2miTDwD)