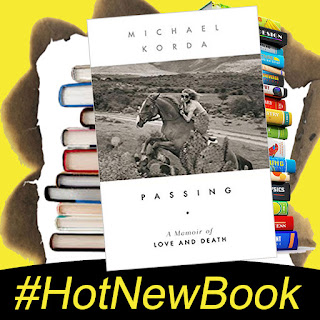 Today we visit with best selling author Michael Korda about his latest book...
Passing: A Memoir of Love and Death
AVAILABLE NOW https://amzn.to/2qht8cQ

A survey shows that the state of New Jersey took in a record-breaking $445 million in legal sports bets during the month of September.
(https://yhoo.it/33GdIgz)

A New Port Richey, Florida man flashed a 100-watt smile while having his mugshot taken Friday following his fifth driving under the influence arrest. Pasco County Sheriff's deputies arrested 56-year-old Gordon Ormond after he violated multiple traffic laws while driving on Embassy Boulevard in Port Richey. Deputies said Ormond ran a red light while driving at a speed of fifteen mph. Deputies used their lights and sirens to signal Ormond to pull over, but he continued driving erratically, striking a basketball hoop in a driveway. Ormond then sped up to about 35 mph in an attempt to elude deputies. Finally, deputies laid down stop sticks in the road ahead of Ormond. Ormond stopped his car when three out of four of his tires were deflated by the stop sticks. Ormond was charged with his twelfth driving with a suspended license offense and his fifth felony DUI. He was also charged with leaving the scene of an accident and fleeing to elude. (https://bit.ly/2mmvzJe)

Judd Apatow and his wife Leslie Mann were seen getting into a heated screaming match outside a restaurant in LA Wednesday night.
(https://pge.sx/31q829j)

ABC News is under fire for airing footage from the war in Syria that was actually gunfire from a Kentucky Gun Range. (https://cnn.it/32m9RoI)

SCOOP OF THE DAY: Brought to you by SingleStudentLoan.com
A Staten Island woman is making headlines for keeping a horse in her house that she also rides throughout her neighborhood. (https://cbsloc.al/2V9ylyK)

A video of a Hawaiian dog that’s been dressed as a giraffe has gone viral.
(https://bit.ly/2Miq34O)

Tiger Woods is releasing a memoir about his career that’s called “BACK.” (https://yhoo.it/35FWOAI)

“The Dave Mathews Band” and the “Notorious B.I.G.” lead the nominees of this year’s Rock and Roll Hall of Fame Inductees. “Thin Lizzy” is also on the ballot.
(https://bit.ly/2OPOQ20)

A Florida man called 9-1-1 to complain that his roommate stole his marijuana.
(https://bit.ly/2VNkvCx)

FUN FACT FOR YOU:
Share this with your friends... they'll think you're really smart!
Saint Lucia is the only country in the world named after a woman. Saint Lucia was discovered by the French after they were shipwrecked on the island. They arrived on December 13th which is the feast day of Saint Lucy – hence, why they named it Saint Lucia!

NEWS HEADLINES.... FROM SOMEWHERE IN THIS WORLD!
Dateline.... CanadaAir Canada Pilots are going to stop using the term “ladies and gentlemen” while addressing passengers over the intercom. (https://washex.am/2nTp3eg)


WEIRD NEWS: Brought to you by WeirdGiftOfTheDay.com
A Vietnamese tourist has been banned from visiting Australia for three years after she did not declare she was bringing food into the country. The unnamed 45-year-old woman arrived at the Sydney airport on Saturday with a suitcase packed with 22-pounds of food, which included items that posed a risk of introducing the African swine Flu. Nearly half of the woman’s perishable cargo reportedly consisted of cooked and uncooked pork. As of September, all 63 provinces of the Southeast Asian country were affected by an outbreak of the deadly disease. About 4.7 million pigs were killed to contain the outbreak. That number is currently above 5.4 million. The African swine flu has spread throughout the southeastern part of Africa, Europe and Asia, where 60 percent of the world’s pig population is reportedly concentrated. Australia is increasing its efforts to keep the swine flu from infiltrating the country by stepping up inspection of mailed parcels and passenger luggage – especially at international airports. According to Yahoo Finance, fragments of the fatal disease were detected in 48 percent of tested seized products in September.
(https://fxn.ws/2VKqt76)

There’s no crying in baseball and there’s definitely no fighting in the stands while watching a playoff game. A Houston Astros fan was arrested for allegedly slapping a New York Yankees fan as the two watched their respective teams in the second game of the American League Championship Series on Sunday. Police said that 73-year-old James Dinkins was arrested on a misdemeanor assault charge after police said he slapped the Yankees fan in the back of the head at Minute Maid Park. The unidentified Yankees fan was just cheering for his team at one point during the game. Harris County District Attorney’s Office prosecutor Nathan Beedle said the allegations against Dinkins were “troubling.” He said Houston prides itself on “hospitality, sportsmanship, and welcoming anyone from anywhere.” (https://fxn.ws/33EUZ5o)

FAKE NEWS.... OR FLORIDA?!
I read a headline and Heidi (and you) need to guess if the story is FAKE NEWS or something that really happened in the state of FLORIDA.
Police in Key West seized a Cookie Monster doll that contained 300 grams of cocaine ….. FLORIDA (https://cbsn.ws/2merYNb)