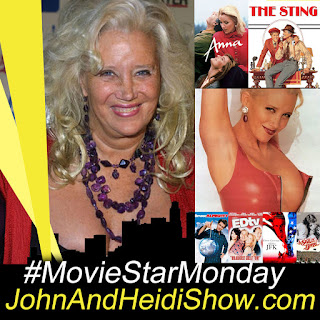 It's a #MovieStarMonday! We talk to Sally Kirkland, BEST Actress Oscar Nominee, Golden Globe winner, Independent Spirit Award winner, LA Film Critics Circle Award winner and veteran of over 200 films. Sally's first director in 1964 was Andy Warhol in "13 Most Beautiful Women." In 1968 she became the first nude actress in American history, "Sweet Eros" by Terrence McNally. Her 220 films also include: "The Sting," "The Way We Were," "Coming Apart," "Cold Feet," "Best of the Best," "Revenge," "JFK," "ED TV," "Bruce Almighty", "Coffee Date" and "Archaeology of a Woman". In the past couple of years she has starred in "Buddy Solitaire", "Gnaw" and "The Most Hated Woman in America" co-starring with Melissa Leo and Peter Fonda. And coming out soon, she has starred in "Sarah Q", "Cuck", "Invincible" and "The Talking Tree". She was nominated for Best Actress in a TV movie by the Hollywood Foreign Press for "The Haunted- A True Story."

ABOUT HER NEW MOVIE CUCK, IN THEATERS NOW!
Ronnie is a young white male, struggling with the pressures of life. He's unemployed, rejected from the military for being mentally unstable, and lives at home with his ailing and nagging mother (Sally Kirkland). Ronnie finds an outlet for his frustration online. The alt-right community gives him a place to belong and absolves his personal responsibility.

A survey found that over one hundred people have already used Tesla’s new V10 software to report accidents with driverless vehicles.
(https://bit.ly/2m2S6uX)

A Brooklyn, New York man, previously arrested for stealing beer and ravioli from a local supermarket, was arrested again after police found him sleeping outside a deli wearing nothing but a hot pink thong. Awakened by officers outside the Fire House Deli, police said 61-year-old Randall Hyten grumbled, “I always sleep this way.” But police said witnesses told them Hyten had been sexually touching himself in front of passersby. Hyten was charged with public indecency and released on a promise to appear in court. He was also ordered to stay away from the Fire House Deli. In April Hyten was arrested on larceny charges after police said he walked out of the Stop & Shop on Kings Highway Cutoff carrying a six-pack of beer and two packages of fried ravioli he had not paid for. (https://bit.ly/2mvtMCd)

Jenny McCarthy told “Watch What Happens Live” that she and Donnie Wahlberg often have sex in airport bathrooms. (https://dcdr.me/356d4uk)
SCOOP OF THE DAY: Brought to you by BetterCreditCards.net
It’s not about money or celebrity. And it’s not even about getting your hands dirty. The job with the least prestige is: real estate broker. That’s the word from a nationwide Harris Poll of adults that measured Americans’ perception of the most and least prestigious professions.

… The professions with the greatest prestige: scientists; doctors; firefighters.

Thieves in New Mexico stole fish worth $4,000 from a local business’ ornamental pond.


Thanks to climate change, coffee could be a luxury item in the not-too-distant future. Oh, see… suddenly you’re concerned about the climate! Experts think that in about 30 years — by 2050 — up to half the land currently used globally to grow coffee could become unusable for this purpose. The experts says the quality of coffee could be diminished as farmers turn to new varieties, and that lower production volumes could cause prices to increase.

Dunkin Donuts is bringing back its coffee beer. (https://bit.ly/2ALeRad)
If you drink coffee at work out of a ceramic mug, protect yourself and scrub it often. Canadian researchers ran swabs around the rims and tested for bacteria and found more than 100 bacterial colonies in mugs presumed clean by the people who used them.

FUN FACT FOR YOU:
Share this with your friends... they'll think you're really smart!
Polar bears could eat as many as 86 penguins in a single sitting...If they didn’t live at opposite ends of the earth! Polar bears live in the arctic, whereas penguins usually live in Antarctica.


WEIRD NEWS: Brought to you by WeirdGiftOfTheDay.com
Ohio police are seeking to identify a Speedo-clad man who prowled around a Kent State University sorority house early Monday morning. The suspect, who was recorded by a doorbell cam, had phrases like “Laugh At Me” and “Shrimp D--k” inked on his chest. The word “Pervert” was also written on his chest, while arrows pointed to his genitalia along with the phrases “4 Inches” and “So Tiny.” While walking on the porch this week, the man appeared to be recording with his cellphone. According to cops, the suspect first showed up at the Alpha Phi house in late-August. At that time, the trespasser was naked and danced on the sorority’s front porch. Investigators believe that the man has also sent a nude photo and messages via social media to sorority members. If apprehended, the “Loser” could face public indecency charges. (https://bit.ly/31Hyax6)

Authorities say that a Florida man has been busted for snipping the brake lines to Fort Lauderdale’s electric scooter-share program. 59-year-old Randall Williams was hit with a third-degree felony criminal mischief charge after he was caught on surveillance footage tampering with the Lime rides. The footage released by the Fort Lauderdale Police Department shows the suspect — wearing shorts and sandals — severing the brake lines of two of the e-scooters on East Broward Boulevard. Police say a total of twenty electric scooters were found nearby with severed brake lines. Since April, authorities said, 140 electric scooters had been vandalized and, in each case, the two-wheeler’s brake line had been severed.(https://bit.ly/2AHQuKS)
FAKE NEWS.... OR FLORIDA?!
I read a headline and Heidi (and you) need to guess if the story is FAKE NEWS or something that really happened in the state of FLORIDA.
A Sebastian man was arrested after he reported a murder by bringing a skull to a grocery store and using it as a hand puppet ….. FLORIDA (https://goo.gl/M8gTBe)