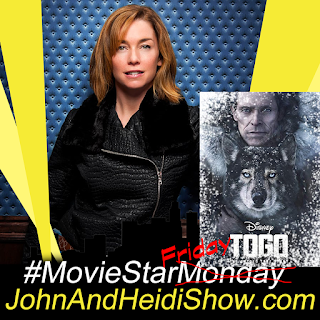 Julianne is now working with Disney+ for a NEW film “TOGO” which premiers on Friday, Dec 20th. From Disney+, “Togo” is the untold true story set in the winter of 1925 that takes you across the treacherous terrain of the Alaskan tundra for an exhilarating and uplifting adventure that will test the strength, courage and determination of one man, Leonhard Seppala, and his lead sled dog, Togo.
https://www.disneyplus.com/

A new study found that any amount of running can lower your risk of early death. (https://bit.ly/38KxMBV)

According to a criminal complaint, a bloody fistfight between two drunken Wisconsin men was triggered by an argument over the TV comedy “How I Met Your Mother.” Police say the brawlers attended the Green Bay Packers game Sunday afternoon, and drove to a bar afterwards. After returning to their SUV, the duo got into an argument and began trading blows. The men eventually exited the vehicle and began trying to flag down passing cars, which brought them to the attention of the Rock County Sheriff’s Office. Upon approaching the duo around 12:45 a.m. Monday, a deputy encountered 33-year-old driver Alan Huschka who appeared “extremely intoxicated” and struggled to keep his balance. Huschka, who had difficulty answering the cop’s questions, had abrasions to his face, one eye was swollen and nearly shut, and his shirt and pants were covered in blood. Heywood, who also appeared drunk and had a fresh bruise on his neck, explained to police that the men began arguing about the CBS sitcom “How I Met Your Mother” while they were driving. The dispute turned violent, Heywood said, when Huschka began striking him. Huschka, who reportedly admitted to driving his car before being approached by police, was arrested for operating a vehicle while intoxicated. (https://bit.ly/36uxbCm)

For the second time this year, Dwayne Johnson is in the biggest movie in the United States and Canada. After leading the summer box-office hit Hobbs & Shaw, he now stars in Jumanji: The Next Level, an adventure comedy that grossed an estimated $60.1 million Friday through Sunday. The film unseated Frozen 2 to claim the top spot at the domestic box office.… Frozen 2 crossed the $1 billion mark over the weekend and is now Disney’s sixth billion dollar movie of 2019. Clint Eastwood’s Biopic about “Richard Jewell” bombed in more ways than one. It only brought in $5 million bucks. Bombshell brought in $300,000. (https://nyti.ms/34vqG0F)

SCOOP OF THE DAY: Brought to you by SingleStudentLoan.com
Kanye West and Joel Osteen are in talks to bring his “Sunday Service” on tour. (https://pge.sx/2YRSs6o)

Harvey Weinstein told the New York Post that he should be remembered for all the help he gave women, as opposed to the allegations against him.
(https://pge.sx/34qRMGj)

Christmas has arrived early this year, in the form of a 4K remaster of Wham!’s iconic Last Christmas music video. The track was originally released 35 years ago in December 1984, and Sony Music Entertainment has now remastered the original footage in 4K.
Baltimore Police found a dead person inside a Porta-Potty at Sunday’s Ravens game.(https://cbsloc.al/34t9usW)

According to a study, the best teen-age liars are usually the most popular kids in school.

A new survey asked Americans about how they approach cold weather behind the wheel. Incredibly, 91% of American drivers don’t think others on the road know how to drive safely in the winter.

FUN FACT FOR YOU:
Share this with your friends... they'll think you're really smart!
Honeybees can get drunk on fermented tree sap. It affects bees in a similar way that alcohol affects humans, causing flying accidents and making it difficult to get back to the hive. Sober bees at the hive will attack the drunken bees to prevent them from entering the hive.


NEWS HEADLINES.... FROM SOMEWHERE IN THIS WORLD!
Dateline.... EnglandA driver in England caused an explosion in his car when he lit a cigarette in his car. The explosion occurred shortly after the man sprayed air freshener. Firefighters said the man used “”excessive” amounts of the aerosol scent before lighting up.


WEIRD NEWS: Brought to you by WeirdGiftOfTheDay.com
An Athens man says police and city officials dropped the ball on a robbery case reported at his family's property last year. Glenn Whiting says a car was stolen from inside the warehouse in February of 2018. “I thought it was a pretty simple deal. I called 911 and thought they would go and stop the car. It had no tags on it,” Whiting said. “We actually relocated the car with some friends of mine who went out looking for it and the city would not open an investigation.” Whiting claims the city refused to interview witnesses who saw the suspect. “They did interview one person in this case and that’s the guy that stole it. He said we gave [the car] to him. I’ve never met him. I don’t know him,” Whiting explained. Whiting says he has met with police and city leaders numerous times. He has even brought up the case at several council meetings, but says he is now being silenced. “I’ve been at odds with the city for a while over several issues,” he said. “After the last city council meeting I was told I can no longer come to the meetings and talk about the car. So I decided if I can't talk about it in the meeting, I'll talk about it on my wall.” With some help, Whiting painted a message on the side of the “Big Belly Deli” building in downtown Athens, which he owns. The message summarizes what happened and calls out Police Chief Cliff Couch, City Manager Seth Sumner and Mayor Chuck Burris. It says in part, “Met with Chief Couch and Seth Sumner who promised to investigate. Well over a year later, key witnesses still not questioned. Mayor Burris refuses to allow me to speak at city council about [the] car. Is this the leadership we want? Time for change!!!” “It was quite an undertaking, but I felt it was a necessary one to bring attention to what's going on in this city,” Whiting said. Whiting believes the city refuses to work the case out of “retaliation to my outspokenness about things going on in the city.” But Chief Couch says that's not the case. “We have spent a great deal of man hours both on the patrol level and on the detective level trying to work this case,” he explained. “Ultimately it was brought to the district attorney's office twice. both times they said right now you guys just don't have enough to make an arrest off of that.” Chief Couch says his team has also tried to find witnesses, but have not been able to contact them. Still, he's says he’s not sure that would be enough proof to make an arrest. “We have really bent over backwards to get him a resolution that he's happy with and it's just not going to happen without us violating the very law we swore to uphold." Now, Whiting is gearing up to sue the city. Chief Couch says Whiting has every right to do so. “I think he should sue,” Chief Couch said. “But I think he knows that that's not going to get him what he wants.” As Whiting's messages continues to dry, he hopes the community understands and supports his mission. He says he understands the impact his message may have on surrounding businesses, including his tenants at Big Belly Deli. “What I'm hoping will come out of this is that people will recognize that we have a problem with leadership in this community.”
https://www.wrcbtv.com/story/41246275/athens-man-paints-message-on-building-calling-out-city-officials

Troopers on the Indiana Toll Road quickly deduced that something was wrong when they stopped to help a motorist who had a flat tire. The first clue was the homemade paper license plate that was written in crayon. This happened Friday around 2:30 at the 147-mile marker of the Toll Road, which is north of Angola. Indiana State Police say Troopers Craig woodcox and Zarek Finley stopped to help a man standing next to a tan Toyota Corolla that had a flat tire. That man -- 20-year-old Joshua Anthony Lewis-Brown from Rochester, New York -- was arrested after the troopers noticed the fake plate and ran the vehicle identification number, finding out the car was stolen out of State College, Pennsylvania on Thursday. Police say Lewis-Brown was also on probation for Grand Larceny. He was booked into Stueben County Jail and charged with Possession of Stolen Property and Operating Without Ever Obtaining a License. He faces extradition back to Pennsylvania. (https://bit.ly/38KO3Xu)

A New Port Richey man was arrested after he was found crawling through the ceiling of a Walmart that had to be evacuated so police could get him out ….. FLORIDA (https://bit.ly/34Hr799)