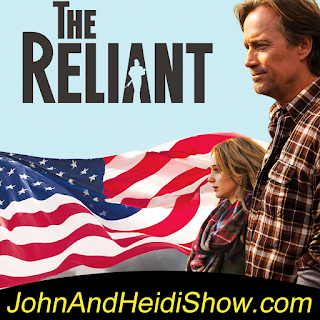 Today we visit with Dr. J.P. Johnston, writer and producer of the new independent film The Reliant, which jumped to the #1 spot on all action films for an entire week on Amazon, following a successful theatrical run on more than 700 screens in October. An unusual feat for a small independent film, the pro-Second Amendment rights message in THE RELIANT clearly struck a tone with the heartland, driving enormous interest in the home entertainment property.

A new study (University of Chicago) polled married people and found that, on average, it took them just 172 days to decide that they wanted to get hitched. That’s about six months — and it’s less time, researchers found, than most people estimate they’ll need before making that big call. Surveyed singles told the researchers that they’d need about 210 days to make up their minds about their potential suitors.


A best man punched his brother’s new wife and then dragged her down the stairs on their wedding day. 29-year-old Tomos Rhydian Wilson went on a drunken rampage at the reception at Lampeter’s Falcondale Hotel in Swansea, south Wales, on July 27th. He became angry after bride Erin Mason-George and her family said her new husband should go to bed because he was drunk. Wilson said his brother should never have married Erin before throwing punches at her and even grabbing her by her wedding dress – pulling her downstairs. Wilson then assaulted Erin’s two sisters Dion and Cally and her mother Linda and hurled abuse at the family. He also damaged the hotel manager’s shirt and fixtures and fittings at the building. Aberystwyth Justice Centre District Judge Gwyn Jones found Wilson, who was working at a prison officer at the time, guilty of the five charges of assault as well as two charges of criminal damage. (https://yhoo.it/2EfseBe)

A new Top Gun: Maverick featurette shows off some of the cockpit training the actors went though, and gives us a look at a new camera system that manages to fit six IMAX-quality cameras inside the cockpit. https://youtu.be/Nz9lnIDdkMo

A Home Alone reboot is coming to Disney+. Archie Yates, who had his breakout role in Jojo Rabbit, will star. He will not be playing the iconic Kevin McCallister, but a new character in a similar premise to the original franchise. The reboot will also star Ellie Kemper (The Unbreakable Kimmy Schmidt) and Rob Delaney (Catastrophe).

SCOOP OF THE DAY: Brought to you by SingleStudentLoan.com
A self-driving truck completed a cross-country trip.

Walmart is about to experiment with autonomous grocery delivery. Wa-Wa is launching a pilot program in Houston that will use a Nuro R1 self-driving vehicle to shuttle food from select stores to customers who’ve opted into the program. The companies didn’t outline how customers would enroll, but Houstonians can expect service to start in the “coming weeks.”

The last people you should ask for advice about your love life are your married friends. Psychologist Frank Bernieri had volunteers watch videos of couples, and then rate how “in love” each couple was. The result? When married people chose the couples they thought were “most in love,” they were wrong almost every time. While singles were almost always right! Married couples project their own happiness onto others who may not be as blissful as they are.

A house fire in the UK started from a dog chewing matches.

Authorities in Shelby, North Carolina, say they seized approximately $3 million in cash, wrapped in plastic, in barrels of raw pork shoulder. Deputies recovered the barrels from a tractor trailer they pulled over. Authorities say they believe the money was headed to drug cartels in Mexico, proceeds from drug sales in North Carolina.
A rescue team helped free a young humpback whale that was tangled in fishing gear south of San Francisco.

FUN FACT FOR YOU:
Share this with your friends... they'll think you're really smart!
Tears contain a natural pain killer which reduces pain and improves your mood. It’s actually an endorphin, which is why you can tend to feel better after a good cry! So next time you feel the need to break down, don’t be shy!


NEWS HEADLINES.... FROM SOMEWHERE IN THIS WORLD!
Dateline.... Australia
In Australia a homeowner has a hilarious response to his neighbor’s extravagant Christmas display. The homeowner’s display is the word “Ditto” in lights, with an arrow pointing to the neighbor’s home.


WEIRD NEWS: Brought to you by WeirdGiftOfTheDay.com
Two Florida men were arrested Thursday morning after they were seen climbing the 35-foot Christmas tree at Largo Central Park. Two witnesses spotted the men climbing the tree at about 4:00 a.m. Thursday. The men also were throwing ornaments from the tree. The men – 28-year-old Shay Morgan Tracy of St. Petersburg and 27-year-old Alex Anthony Laky of Hudson -- were arrested on charges of criminal mischief and were booked into the Pinellas County jail. Bail was set at $150 for both men. Jail records show both men were released on bail. The tree had “very minor damage, some broken branches that are not noticeable. Most of the damages were broken ornaments that have since been replaced,” Largo police Lt. Scott Gore said in an email. (https://bit.ly/34iSl4Z)

A devoted son has been caught dressing up as his 60-year-old mother so he could pass her driving test for her in Brazil. Maria Schiave, from Porto Velho, in the country's north, had failed her test three times before son Heitor took matters into his own hands. The 43-year-old allegedly impersonated his mother by dressing up in women's clothes on Tuesday to sit the fourth attempt on her behalf. Donning full make-up with painted red nails, a floral blouse and long flowing skirt and his hair blow-dried into a soft feminine style, the car mechanic looked every inch the part. He nearly fooled the driving test examiner until his elaborate plan backfired and she decided to double check his ID after growing suspicious of his awkwardness as a woman, large hands and unusually high-pitched voice. Schiave faces charges of identity fraud and attempting to deceive a government body. He has been released on bail while detectives open an investigation. (https://dailym.ai/34isI4t)

A Tarpon Springs man was arrested for calling 9-1-1 and claiming his wife was a “Black Widow Spider” ….. FLORIDA (https://bit.ly/2Y7a3aa)