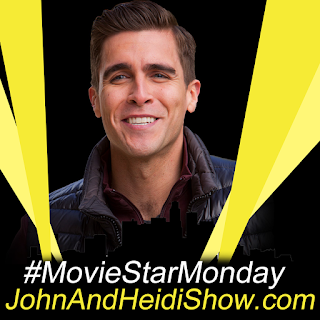 It's another #MovieStarMonday with Josh Segarra best known for his television roles as police officer Billy Cepeda on Sirens, Hector Ruiz on The Electric Company, Justin Voight on Chicago P.D., ‘C.O’ Stefanovic on Netflix’s Orange is the New Black and Adrian Chase / Prometheus on Arrow where he was a series regular. Josh can also be seen on the big screen in Judd Apatow’s feature film Trainwreck, as Jason in the feature remake of Overboard for MGM. You can watch him alongside Dennis Leary in the new Christmas Special on FOX TV THE MOODYS. Watch it for FREE at https://www.fox.com/the-moodys/

Earlier this year, Spanish police arrested a Colombian man who allegedly had a half-a-kilo of cocaine stashed under his toupee when he arrived in Barcelona on a flight from Colombia. The accused mule caught the attention of investigators due to the towering nature of the wig sitting atop his head. A subsequent search of the suspect yielded the cocaine, which was inside a plastic bag glued to his dome. Cops said that the accused mule, who was not identified, arrived June 18th in Barcelona on a “hot flight” from Bogota, which they described as an incoming plane from a narcotics producing country. Police said, “The ingenuity of drug traffickers has no limit when trying to circumvent the controls.” Depending on purity and how it was cut, investigators said, the seized cocaine could have yielded 30,000 euros (equal to about $33,500). (https://bit.ly/32rF0rm)

The animated adventure Frozen 2 is the No. 1 movie in North America again, earning an additional $34.7. This is the third weekend in a row the Disney picture has won the box-office race.


The Los Angeles Film Critics Association announced its 2019 winners for the best in film Sunday with top honors going to Parasite.
SCOOP OF THE DAY: Brought to you by SingleStudentLoan.com
A study finds the average person will spend the equivalent of 43 days of their lifetime struggling to open troublesome packaging.


Two of the most delicious items on this planet are milkshakes and fries. And now there’s a new spot that serves both of them almost exclusively. Holyshakes in Doral, Florida, focuses on shakes and fries.


A woman in Washington state is in jail after a suspected DUI incident at a Taco Bell. Anastacia Etzwiler drove her RV the wrong direction through the Taco Bell drive-through, and the vehicle became stuck.

A live grenade was found in a dresser donated to a North Carolina thrift store. An employee noticed the explosive in one of the drawers after the furniture was donated (to the Habitat for the Humanity ReStore in Durham) on Saturday afternoon. The volunteer then “very calmly” took the grenade outside the building before alerting management. The store was then evacuated and the bomb squad took it away.


Thanks to climate change — and zombies — it’s more important than ever to have a disaster preparedness kit. Lucky for us Amazon has it covered. For just over $200 your family of four — plus the family dog — can rely on the Emergency Zone Urban Survival 72-Hour Bug Out/Go Bag Survival Kit. It’s a huge backpack that’s “Federal Emergency Management Agency–compliant.” There’s food and water — good for five years — emergency blanket, weather protection, medical supplies, and more. https://amzn.to/38sVhzl

FUN FACT FOR YOU:
Share this with your friends... they'll think you're really smart!
The world record for stuffing drinking straws into your mouth at once is 459. Manoj Kumar Maharana, from India, broke the world record on 28th August 2017 for stuffing 459 drinking straws in his mouth at once! In order to break it, he had to keep them in his mouth for at least 10 seconds.


NEWS HEADLINES.... FROM SOMEWHERE IN THIS WORLD!
Dateline.... Japan

In Japan, Mayonnaise Man recently struck again. A high school girl (in Ebetsu City) was approached by a 39-year-old man. The man then suddenly squirted mayonnaise from his mouth onto the girl. Police were able to track down and arrest the suspect, mostly thanks to the DNA evidence present in the spatter of the mayonnaise.


WEIRD NEWS: Brought to you by WeirdGiftOfTheDay.com
A brewery got a little too merry for local authorities. A North Carolina brewery pulled its winter ale from taproom shelves after the North Carolina Alcoholic Beverage Control Commission made a visit. The beer in question was reportedly being sold in cans that featured provocative imagery involving reindeer. While the offending cans have been removed from shelves, they reportedly showed reindeer in various sexual positions. While the reindeer were pixelated on the cans, the images were still considered explicit enough to be removed from the brewery’s shelves. Sycamore Brewing pulled the 2019 version of their Christmas Cookie Winter Ale from their shelves after an anonymous complaint was made about the imagery on the cans. The brewery brought the beer back to shelves with what they described as “G-rated can art.” According to the company’s Facebook page, the beer will not be available in stores and will only be sold in their taproom. Since the reindeer design wasn’t going to be sold in wide distribution, Sycamore Brewing believed that they could get away with the risqué holiday design. (https://fxn.ws/2E6tdUl)

According to police, during an argument, a Florida Woman took apart her family's artificial Christmas tree and proceeded to strike her longtime boyfriend with three sections of the fake fir. Responding to a call about a disturbance at a Clearwater property, cops made a forced entry into the home 38-year-old Krystall Graham and the victim share with two children. Upon entering the residence around 7:00 a.m., Graham and the victim were “actively engaged in a physical altercation.” During a police interview, Graham said the couple began arguing “due to the victim setting the TV volume on too high while she was sleeping.” As a result, Graham said, she “squared up to the victim and was screaming in his face.” Graham also reportedly admitted that she “took apart an artificial Christmas tree, and threw three sections of the tree” at the 38-year-old victim. Charged with domestic battery, Graham was booked into the Pinellas County jail on the misdemeanor count. (https://bit.ly/2Rua9Hw)

A Bradenton Dog Walker was busted for pubic intoxication after she took a bath in a shopping mall fountain with her dogs ….. FAKE NEWS