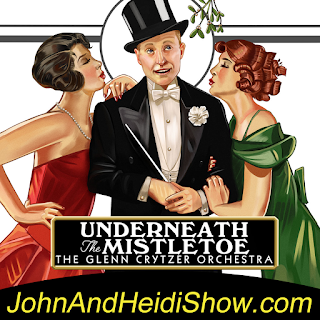 Today we visit with Glenn Crytzer, a New York City based bandleader, arranger, composer, guitarist, and vocalist who is in love with the music of the Jazz Age and Swing Era. The Glenn Crytzer Orchestra recently released a NEW-OLD Christmas Album “Underneath The Mistletoe”
AVAILABLE NOW - https://www.glenncrytzer.com/


A new survey finds a typical couple will get into it over the temperature of their home about three times a week.

According to a police report, a Florida stripper is facing criminal charges after allegedly kicking the manager of a gentleman’s club in the genitals while wearing high-heel “exotic dancer” shoes. Investigators allege that 35-year-old Lakiesha Ortiz became unruly early yesterday morning after the manager of Sinsations, an adult club in Clearwater, “asked her to go home for the evening.” Cops noted that Ortiz, who “is employed as an exotic dancer at Sinsations,” was asked to leave the club because she was intoxicated. Ortiz allegedly threw beer bottles and glass drinking cups upon being asked by manager Mark Kachucha to depart the club. Later, as club security and Kachucha sought to “de-escalate the situation,” Ortiz allegedly “front kicked” Kachucha "directly in his genitals" while wearing her work shoes. Ortiz then allegedly kicked Kachucha in the stomach. After cops arrived at Sinsations, Ortiz allegedly kicked Kachucha a third time, “directly in front” of a Clearwater Police Department sergeant. Charged with battery and disorderly conduct, both misdemeanors, Ortiz was booked into the county jail around 3:15 AM. (https://bit.ly/2slHOc7)

Brad Pitt revealed that he turned to marijuana at the height of his career to escape the pressures of his fame. (https://pge.sx/2E1T286)

Bill Cosby lost his appeal case against the sexual assault charge that landed him in prison. (https://pge.sx/2P8N9MD)

SCOOP OF THE DAY: Brought to you by SingleStudentLoan.com
Oreo got back into the mystery cookie game this year. Here’s how the corresponding contest worked: If you guessed the correct flavor, you were entered to win $50,000. Easy money, right? Well, Oreo finally revealed that the creme is churro-flavored. The winner of the sweepstakes has been notified directly. https://www.delish.com/food-news/a30079593/oreo-mystery-cookie-churro/

A U.S. Startup called “MindMed” is developing a psychedelic wonder drug that can reset the brain in order to fight addictions. (https://dailym.ai/2rxQL1T)

An Oregon woman is being accused of having sex with a 14-year-old boy she met on Snapchat. (https://bit.ly/2PAL4Ij)

North Carolina police are looking for a pant-less prowler who was lurking outside a suburban home.(https://bit.ly/2rpY7EK)

A Maine man who was arrested earlier this week for cooking methamphetamine inside a church has plead guilty. (https://bit.ly/34c9T2G)

FUN FACT FOR YOU:
Share this with your friends... they'll think you're really smart!
Michael Jackson offered to make a Harry Potter musical, but J.K. Rowling rejected the idea. Rowling defended herself because she says she turned down a lot of adaption opportunities, and Michael Jackson’s just so happened to be one of them.

Dateline....South AfricaA married history teacher at a top South African School is accused of sleeping with five of her male students. (https://bit.ly/2qqMxbW)


WEIRD NEWS: Brought to you by WeirdGiftOfTheDay.com
Four people were arrested Saturday as people dressed as Santa Claus paraded the streets of Hoboken, New Jersey. The rowdy event known as “SantaCon” returned on Saturday, and town officials were reminding all Santa-themed bar crawl participants that beverages are not allowed on New Jersey Transit trains, buses, or light rail vehicles. People are also encouraged to bring presents for kids in need. However, the annual event has a troubled past, and is not sanctioned by the city. “This is not a helpful day for the City of Hoboken - not a day many tolerate. Unfortunately, taxpayers have to foot the bill for,” says Mayor Ravinder Bhalla. Authorities made ten arrests and issued eight city ordinance violations during the annual Hoboken pub crawl in 2018. Police also cited people for public urination amid overcrowding at several locations. On Saturday, the lines were long, and Hoboken brought in 75 officers to keep the peace and bring in help from neighboring Union City. (https://7ny.tv/2PA9j9N)

A sugar company employee in Nairobi took early retirement and left with a $3,600 pension. On his way home he stopped at a local bar, cashed the check and had a drink. The beer apparently went to his head and he proceeded to buy rounds for the entire bar. After hours of this he found a lady willing to party with him and proceeded to a hotel for the night. In the morning he woke to find her gone with the last of his pension.

A Brockville man was arrested during a job interview at Kohl’s after he tried to shoplift NIKE sneakers ….. FLORIDA (https://hrld.us/36eBRfu)