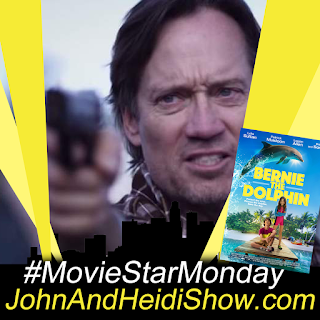 It's another #MovieStarMonday with Kevin Sorbo (Hercules in Hercules: The Legendary Journeys, and as Captain Dylan Hunt in Andromeda) to visit about a few of his new films.... LG’s Bernie the Dolphin 2 is now on DVD and available for downloading... and The Reliant, which jumped to the #1 spot on all action films for an entire week on Amazon, following a successful theatrical run on more than 700 screens in October. An unusual feat for a small independent film, the pro-Second Amendment rights message in THE RELIANT clearly struck a tone with the heartland, driving enormous interest in the home entertainment property. https://www.thereliantmovie.com/

New research shows 52% of employees will be “workshopping” — that is, shopping online from the office or while using a corporate device. Of those respondents, 44% admitted that surfing for deals hinders their on-the-job productivity. In a separate survey, 77% of technology leaders said their firm allows “workshopping,” but more than half (52%) prefer employees abstain from the activity. Security risks (59%) and loss of productivity (34%) were cited as the top “workshopping” concerns among tech managers.

A South Carolina man who was arrested twice in five days for trafficking meth told investigators that someone had placed meth in his underwear. The Berkeley County Sheriff’s Office arrested Carl Linsay Wiggins and has charged him with two counts of trafficking meth. His first arrest was on December 5th when a deputy was patrolling Moncks Corner and saw a Ford F-150 failing to maintain its line. The deputy said when he made contact with the driver, identified as Wiggins, he was “extremely nervous” and had an inconsistent story about where he was coming from. In addition, the deputy reported the passenger’s story did not line up with Wiggins’ story, and saw the suspect begin to worry. A search turned up 27.2 grams of meth in Wiggins’ pants pocket. Wiggins was eventually locked up at the Hill-Finklea Detention Center. According to the sheriff’s office, about five days later, deputies encountered Wiggins during a safety checkpoint on Highway 35. Deputies say they noticed that the vehicle Wiggins was driving was being “operated unsafely.” Authorities say deputies found 17.5 grams of meth in Wiggins’ groin area. “Wiggins told deputies someone else put the crystal-like substance in his underwear,” the sheriff’s office said. (https://bit.ly/2PTvg3R)

The Academy of Motion Picture Arts and Sciences announced that 344 films are eligible for the Best Picture prize at the Oscars in 2020.

“Jersey Shore” Star Ronnie Ortiz-Margo says he wants cooking lessons for Christmas. (https://pge.sx/2S739k8)
SCOOP OF THE DAY: Brought to you by www.FunkyMonkeyShirts.com

Puma has released a $100 pair of shoes specifically designed for wearing while playing video games.

A San Francisco man was arrested for defecating in a grocery store on Tuesday. (https://bit.ly/2PvFRCT)

Amazon’s Alexa has a new feature that can change the subject if you get into an argument with your family at Christmas. (https://dailym.ai/2Z2BcLN)

A group of New Jersey high school students were visiting the “Rocky” statue in Philadelphia when they ran into Sylvester Stallone.(https://fxn.ws/2PZ5qvb)

A Florida woman was arrested for sleeping with a teenage boy and showing him how to deal drugs. (https://bit.ly/2PZ5f2Z)

A Massachusetts substitute teacher was fired for smoking marijuana in front of her class. (https://bit.ly/2EyWLu0)

A video of a truck dangling from a bridge in California has gone viral.
(https://bit.ly/2S8LZ5F)

FUN FACT FOR YOU:
Share this with your friends... they'll think you're really smart!
Squirrels forget where they hide about half of their nuts. While not all squirrels bury their nuts, the ones that do only recover around 26% of their nuts.


NEWS HEADLINES.... FROM SOMEWHERE IN THIS WORLD!
Dateline.... Panama
Twelve inmates died after a shooting broke out at a Panama Prison.
(https://reut.rs/2PCSPiu)


WEIRD NEWS: Brought to you by WeirdGiftOfTheDay.com
Police reported that, luckily, “The Pop-Tart did not strike the victim.” During an argument Sunday evening, a Florida Man threw a Pop-Tart at his wife’s head, according to cops who say that while the toaster pastry missed its target, the victim was struck in the arm by her spouse’s follow-through motion. According to investigators, 36-year-old Brandon Sutherland and his wife were quarreling in their St. Petersburg residence when, according to the victim, Sutherland “became upset and intentionally threw a Pop-Tart at her head.” While the Pop-Tart did not strike the 29-year-old woman, she was hit on the arm by Sutherland’s left hand. A sheriff’s deputy reported observing a red mark on the woman’s arm. During police questioning, Sutherland reportedly confessed to throwing the Pop-Tart, and that he “grazed the victim’s right arm with his left hand.” A deputy noted that he “observed the broken Pop-Tart on the floor of the residence.” Sutherland was arrested for domestic battery, a misdemeanor, and booked into the county jail. He was released from custody late Monday afternoon. A judge has ordered Sutherland to have no contact with the victim. Sutherland was arrested last March for allegedly battering the same woman.
(https://bit.ly/2M7MEAx)

In a dopey diversionary scheme, a North Dakota man doused a Bible with lighter fluid and ignited the Good Book inside a Walmart, believing that the fiery distraction would allow him to steal merchandise without detection. Cops allege that 27-year-old Andrew Ells set the fire Friday at a Walmart in Bismarck. Wearing a disguise that included a “camouflage balaclava,” Ells torched the Bible in the Walmart’s garden section. The resulting blaze caused no injuries, but a store manager told police that “the loss of merchandise due to smoke damage was approximately $300,000.” The incident was recorded by store surveillance cameras, and the footage led cops to Ells, who reportedly confessed during police questioning Monday. Ells said he “had a Bible with him that he had under his disguise,” adding that he “used lighter fluid and put this on the Bible.” Ells said his “reasoning for igniting the fire, was a distraction so he could steal the items he had in the cart.” Charged with arson, he is locked up in lieu of $25,000 bail on the felony count. (https://bit.ly/34F96HG)
FAKE NEWS.... OR FLORIDA?!
I read a headline and Heidi (and you) need to guess if the story is FAKE NEWS or something that really happened in the state of FLORIDA.

A man was busted for abusing 9-1-1 after he called to report a stripper who refused to give him, QUOTE, “boom boom.” ..... FAKE NEWS