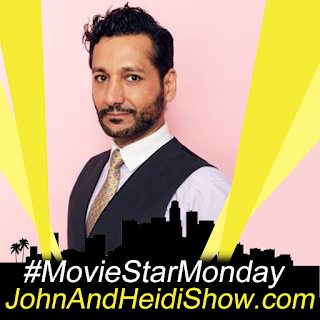 It's another #MovieStarMonday with Cas Anvar who stars in The Expanse, Season FOUR just premiered on Amazon Prime with great anticipation and excitement as the long awaited fan favorite. Termed by the series' viral fans as "an edge of your seat ride where all the rules that are so carefully followed are perfectly broken," See: https://tinyurl.com/ExpanseSeasonFour

Anvar has also been on the big screen in MANY FILMS, including Oscar-winning Best Picture 'Argo', The Vatican Tapes, Shattered Glass, Diana, Source Code, The Factory, The Terminal, Miss India America, and the upcoming film 'The Operative' On the small screen, Anvar has appeared on CBS's "NCIS:LA", USA network's "In Plain Sight", ABC's "Boston Legal", ABC's "Castle", CBS's "Intelligence", and the hit series "24" SyFy's "Olympus", and Amazon's "The Expanse" Along with his film and television acting, Anvar's other passion is voice work. He is well known for his roles in some of the world's most popular video games: Call of Duty: BO2, Halo 4, and as Altair in Assassins Creed: Revelations.

A study by the New England Journal of Medicine found that half of all Americans will be over weight by 2030. (https://yhoo.it/36Vt6aS)

According to reports and jail records, a Texas man named Luke Aaron Skywalker Sexton was busted for marijuana possession after a cop pulled him over and smelled pot in his car. 19-year-old Skwalker Sexton was pulled over in Garden Ridge, a city north of San Antonio, on Monday when a police officer noticed his car had no front license plate. The cop smelled pot in the car and found a baggie of marijuana after searching the vehicle. Sexton allegedly admitted owning the grass and was arrested at the scene. He was held on $2,000 bond, which he made and was released the same day. (https://bit.ly/2SjuuQi)

Critics gave this year’s stripper movie, “Hustlers,” one bad review after another.
(https://bit.ly/2m18V91)

Ratings for this year’s host-free version of “The Emmy’s” were down at least 20% from last year’s show. (https://bit.ly/2kGyb4i)

SCOOP OF THE DAY: Brought to you by FunkyMonkeyShirts.com
This past September, the U.S. Coast Guard captured a submarine that was hauling $165 million worth of cocaine.(https://bit.ly/2lBs2a7)

A Wall Street Journal Study found that having pets can bring down the resale value of your home because of people who don’t like the smell or the dander. (https://on.wsj.com/2nd6osY)

The University of Texas conducted a study of MUMMIES and found that high cholesterol was a problem for ancient Egyptians. (https://bit.ly/2lMP6Cy)

In 2019 the state of Massachusetts banned all forms of E-Cigarettes.
(https://yhoo.it/2lM12ED)

A Michigan school teacher who was arrested for coming to class drunk lost his teaching license.(https://bit.ly/2lrofMl)

FUN FACT FOR YOU:
Share this with your friends... they'll think you're really smart!
In total, there are 205 bones in the skeleton of a horse. Even though they are much greater in size to humans (we have 206), horses have just about the same number of bones in their skeleton as we do!

She was just meeting her obligations, showing up for jury duty, so she sat down with the others in the room at the Jefferson County courthouse. But then, there he was. A grown man in a rabbit onesie. “I had to do a double take because I could not believe it,” said a woman who snapped off a few photos of the man in the bunny suit and spoke with CBS4. Yes, a pink bunny suit, with the ears and everything. Maybe related to the movie, “A Christmas Story,” because that’s exactly what it looked like. “Of course, the group of about 75 people waiting to find out if they were assigned to a jury began whispering about what seemed to be an effort to get out of duty. He was obviously extremely proud of it because he had his ears popped up and everything,” she said. The court picked a group, then another, about twenty people in all had their names randomly called for jury duty. The last group, including the woman who snapped the photos and the man in the bunny suit, waited and then finally were dismissed. (https://cbsloc.al/34lzYwg)

A 36-year-old man is facing multiple charges including assault and six counts of animal cruelty after police responded to a residence for a domestic violence call. According to the affidavit, police believe Roberto Collins assaulted his ex-fiance and her 6-year-old daughter on Sunday. The woman told police Collins was armed and had fired four shots from the backyard of the home on East Hunters Glen Street near Egypt Central Road. Police say the argument stemmed from the woman planning to break off her engagement with Collins. She was allegedly holding her daughter in her arms at the time of the assault. Once deputies arrived on the scene, Collins was taken into custody. As investigators secured the scene, two dog carcasses were found in the yard along with four other dogs that were running around. The affidavit says deputies began searching the home where they found two rattlesnakes, two alligators, a Gila monster and a dead iguana. There was also feces and insects throughout the home. Tennessee Wildlife Resources Agency and the Department of Child Services were contacted for this investigation, and the Memphis Zoo arrived to seize the animals from the home. Collins is charged with domestic assault, six counts of animal cruelty, reckless endangerment to a minor and possession of a deadly weapon during an offense. https://www.wvlt.tv/content/news/Alligators-snakes-seized-from-Tennessee-home-566019831.html
FAKE NEWS.... OR FLORIDA?!
I read a headline and Heidi (and you) need to guess if the story is FAKE NEWS or something that really happened in the state of FLORIDA.

Police charged a Florida man with battery after they say he punched another customer in the checkout line at a Walmart store. Cape Coral police said Henry Harvey, 69, reportedly became angry over customers ahead of him in line taking too long at the register, WTVF reported. An argument resulted in Harvey allegedly punching the victim in the head, according to reports. Officers said they later located Harvey at his home and arrested him. The victim is not seriously injured. https://www.wvlt.tv/content/news/Florida-man-reportedly-punches-customer-who-took-too-long-at-the-Walmart-register-565924621.html