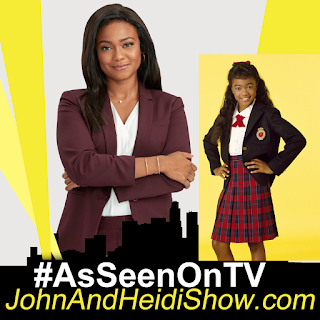 Today we talk with Tatyana Ali, an actress and singer best known for her role as Ashley Banks on the NBC sitcom The Fresh Prince of Bel-Air from 1990 to 1996. Currently starring in CHRISTMAS HOTEL premiering on LIFETIME this Saturday, December 21st at 8PM ET/PT

A survey shows women keep their favorite piece of clothing for 12 years. The survey also discovered that the average woman has more than 125 items of clothing in her wardrobe but that she wears less than a quarter of them regularly.

A man whose actions forced an American Airlines flight from Charlotte to Utah to land in Oklahoma is facing criminal sexual misconduct charges involving a female passenger. Flight 807 departed late Tuesday headed for Salt Lake City, but was diverted to Tulsa. Once the plane was on the ground, passenger James Cholewinski-Boy was removed from the aircraft. Cholewinski-Boy is accused of engaging in unwanted sexual conduct with a female passenger aboard the plane. “The public should know these allegations pertain to criminal sexual misconduct by Mr. Cholewinski-Boy against a female passenger, not a threat to the plane or air travel,” officials with the U.S. Attorney’s Office in Oklahoma state. Cholewinski-Boy was charged with engaging in unwanted sexual contact with a female passenger and public intoxication. American Airlines released a statement about the incident: “American Airlines flight 807 from Charlotte to Salt Lake City diverted to Tulsa, Oklahoma Tuesday night due to a disruptive passenger. Law enforcement met the flight, removed the passenger, and the flight continued to Salt Lake City.” Officials say the situation is being investigated further by the FBI.
https://www.wvlt.tv/content/news/Man-charged-with-unwanted-sexual-contact-with-passenger-aboard-flight-564724711.html

Scarlett Johansson thanked “Saturday Night Live” for introducing her to Colin Jost, calling him “the love of her life” at the end of the show. (https://pge.sx/2YNIao0)

Harvey Weinstein shared a photo of himself at the hospital to push back against claims that he was faking his illness in court. (https://bit.ly/2YPjrzC)

SCOOP OF THE DAY: Brought to you by SingleStudentLoan.com
Kentucky Police confiscated twenty pounds of methamphetamines that were stashed inside an air fryer. (https://bit.ly/34jyxhL)

A report by the Pentagon found that 2019 had more credible UFO sightings than any year in history. (https://bit.ly/2rGjm5k)

A survey by Baby Center found that Sophia was the most popular name for new born girls in 2019. (https://bit.ly/38zXfhk)

In 2011, more than 1 in 3 divorce filings in the U.S. contained the word 'Facebook'. References to social networks are on the rise when it comes to divorce cases, as well as child custody cases.


NEWS HEADLINES.... FROM SOMEWHERE IN THIS WORLD!
Dateline.... ENGLAND
In the UK police arrived at a woman’s home to arrest her for theft at her place of employment. But they discovered the woman was too busy to go to jail because, moments before the cops arrived, she’d given birth. The woman, unaware that she was pregnant and startled by the birth of her first child, told police the baby “just fell out. I thought it was my intestines!”


WEIRD NEWS: Brought to you by WeirdGiftOfTheDay.com
Investigators say that a Florida Woman was arrested early yesterday for allegedly throttling her girlfriend during an “acrimonious” 1:30 a.m. argument over “chips and infidelity.” An arrest affidavit does not provide specifics about the chips - potato, tortilla, corn, etc. - or the alleged straying. Police charge that 27-year-old Patricia Ann Isaac and her girlfriend of eight years were arguing early Friday when the dispute “turned physical,” with Isaac allegedly grabbing the victim “by the throat with both her hands.” The 27-year-old victim told police she “could not breathe and gasped for breath once her throat was released.” When cops questioned Isaac at the couple’s Clearwater home, she reportedly admitted that she “punched the victim and put her into a headlock.” Isaac was arrested for domestic battery by strangulation, a felony. She was released from the county jail late last night after posting $5,000 bond. Isaac, who has a tattoo with her girlfriend’s name and the date they met, has been ordered by a judge to have no contact with the victim. (https://bit.ly/2LZRyjk)

A New York high school soccer coach has come under fire for taking his team to Hooters. The Lake George Jr./Sr. High School soccer team had just lost to another team after an undefeated season on November 2nd when their coach, Blake White, decided to bring the players to the restaurant, known for women dressed in tight and revealing clothing. White's decision apparently didn't sit well with school administration because, on November 12th, the team was summoned to a mandatory meeting where the dinner was discussed, the local Times Union newspaper reported, where students were told "this was not in line with our athletic program and school community values." Lynne Rutnik, superintendent of the Lake George Central School District, told the news outlet the Hooters outing required "action" and said, “It’s been taken seriously and we addressed it.” Per the Times Union, White works as an elementary school teacher and longtime sports coach for the district. (https://fxn.ws/38Iht8P)
FAKE NEWS.... OR FLORIDA?!
I read a headline and Heidi (and you) need to guess if the story is FAKE NEWS or something that really happened in the state of FLORIDA.
A Miami Sheriff’s Deputy who was busted for soliciting a prostitute said he shouldn’t be arrested because the hooker was for his son ….. FAKE NEWS