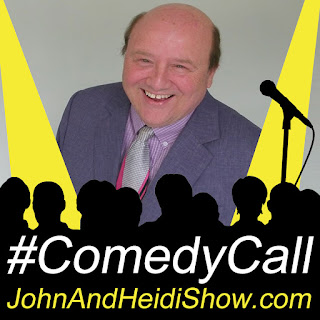 Today we have a #ComedyCall with the very funny Bill Kirchenbauer. From the comedy stage to the big screen and little screen, Bill has been entertianing audiences for YEARS! You may recognize him as Coach Graham Lubbock on both Growing Pains (1985) and Just the Ten of Us (1987). Several years later, he played Coach Graham Bullock on Clueless (1996). A fan favorite is his hilarious character Tony Roletti, a lounge singer on the satirical talk show America 2Nite. Singing off key, with a wig that constantly falls out of place.
http://www.billkirchenbauer.com/

A British Survey found that the average person will try 126 diets over the course of their lives. (https://bit.ly/2TBVP0Z)

A Florida man accused of having cocaine in his hat told investigators he didn’t know the drugs were there. A 29-year-old Vero Beach man was arrested at 11:10 p.m. on January 8th on a charge of possession of controlled substance after the headgear hullabaloo. An Indian River County sheriff's deputy reported stopping a bicycle without lights. The 29-year-old bicyclist allowed deputies to search him. In the brim of his hat, investigators reported finding “a white powdery substance” in cellophane cigarette packaging. The bicyclist said he was unaware of the items in his hat. The powder in the bicyclist’s hat, the style of which was not identified, tested positive for cocaine. He said it wasn’t his, and he also said it “definitely” wasn’t cocaine. He was promptly arrested and taken to jail. (https://bit.ly/37bJ9By)

The Producers of the World War 1 Drama, “1917,” took home the Best Film title at the Producers Guild Awards. (https://bit.ly/2TCXtzl)


Meghan Markle’s Dad called his daughter a lost soul and accused her of destroying the Royal Family in a new documentary that aired on Britain’s Channel 5 Sunday night. (https://pge.sx/30yaqMj)

SCOOP OF THE DAY: Brought to you by FunkyMonkeyShirts.com
The U.S. census is about to begin in Toksook Bay, Alaska. For most Americans, the 2020 census won’t begin for months. But for decades the count has started early in Alaska, where large portions of the state aren’t connected by roads and can have spotty mail service. Local census takers must get a head start while the frozen ground allows easier access to the remote areas.


The Houston Astros players are refusing to comment after Major League Baseball caught their team stealing signs during the 2017 Playoffs. Three managers who were on the Astros in 2017 have been fired.(https://bit.ly/2G1ctz1)


Meat Loaf is suing the Dallas hotel where he fell offstage last year and injured himself. (https://bit.ly/30oKLp7)


According to a new survey, adults in the top 1 percent of U.S. household income — those who earn at least $500,000 a year — have “dramatically different life experiences” than everyone else. The findings show a “near-universal life satisfaction” for the wealthiest Americans as they accumulate more and more of the country’s riches. Fully 90 percent of the 1 percent say they are “completely” or “very” satisfied with their lives in general.


NEWS HEADLINES.... FROM SOMEWHERE IN THIS WORLD!
Dateline.... JapanJapan is opening a Super Nintendo Theme Park that promises to take adult gamers inside their favorite games. The Park’s opening will coincide with the Summer Olympics in Tokyo. The park also has a real life Super Mario game for kids. (https://bit.ly/2RlFFpy)

WEIRD NEWS: Brought to you by WeirdGiftOfTheDay.com
A Florida man pleaded guilty to his part in a trafficking scheme in which live water monitor lizards were stuffed into socks and concealed inside electronics to be smuggled from the Philippines to the United States. Court records show that 44-year-old Akbar Akram pleaded guilty in Tampa federal court Wednesday to one count of wildlife trafficking in violation of the Lacey Act and the the Convention on International Trade in Endangered Species Treaty. Akram admitted to illegally importing more than 20 live water monitor lizards from the Philippines in 2016. He avoided customs authorities by placing the lizards in socks, which were sealed closed with tape and concealed inside electronic equipment and shipped under a false label. The equipment was transported through commercial carriers to Akram’s associate in Massachusetts. As part of his plea, Akram admitted that he knew the monitor lizards he received had been taken in violation of Philippine law and that the import violated U.S. law. He also admitted that upon receiving the monitor lizards, he sold some of them to customers in Colorado, Connecticut, and Massachusetts. (https://bit.ly/3a4ZTfH)

Police arrested a suspected burglar who they say broke into a Georgia tire shop, got stuck inside and called 911 for help. Nathaniel King, 30, faces criminal trespass charges after police say he broke through the rear door of a Cartersville, Georgia, tire shop last Sunday. As King entered the store, a rack of tires fell on top of him, trapping him inside. Buried under many pounds of rubber, police say the man was in a desperate situation: the business was closed with no one around. So, King called 911. "Help me," he said in the phone call. "I'm in a tire shop in Cartersville. I think the tire rack is going to kill me." Sparing no time, a police officer answered the call and found out the suspect’s unusual predicament. “He observed the suspect underneath the tires yelling for help. The officer was eventually able to make entry into that business and get the tires off him and get him out,” said Michael Bettikofer with the Cartersville Police Department. Bettikofer says King told the officer he was being chased and went inside the tire store to get away from the person chasing him, but police found no evidence that King’s store was true. King didn’t suffer any injuries in the incident, expect maybe to his pride. He remains in jail on a $1,500 bond.
https://www.wvlt.tv/content/news/Suspected-tire-shop-burglar-calls-911-on-self-after-getting-stuck-under-pile-of-tires-566933331.html
FAKE NEWS.... OR FLORIDA?!
I read a headline and Heidi (and you) need to guess if the story is FAKE NEWS or something that really happened in the state of FLORIDA.