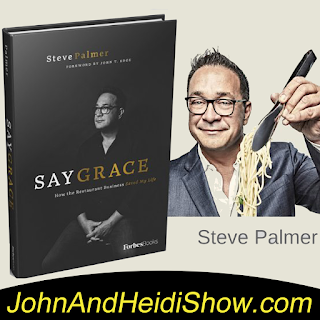 Today we visit with Steve Palmer, a restaurateur and the author of Say Grace: How the Restaurant Business Saved My Life. Palmer struggled with addictions personally and lost a close friend to suicide. Nearly two decades ago, Palmer’s addiction to alcohol and cocaine became so consuming that the owner of the restaurant where he worked sat him down and gave him a stark choice: Go into rehab or clean out your office. Palmer turned his life around. Now he’s trying to help others do the same, helping found a support group called Ben’s Friends, named for his friend who committed suicide. (https://www.bensfriendshope.com)

An Emerson College Poll found that 34% of Americans think Jeffrey Epstein was murdered, as opposed to 33% who think he actually committed suicide. (https://bit.ly/2HxYKRc)


THIS IS YOUR BRAIN ON DRUGS:
Brought to you by TimeForRehab.com! Each day we share stories about people doing dumb things under the influence, but addiction is NO LAUGHING MATTER! If you or someone you know needs help, we're here to help! You can learn more at TimeForRehab.com.

A man who police say was driving drunk in South Carolina crashed — after apparently being unable to hit the brakes — into a brakes shop. 21-year-old Jaderric Freeman of Montgomery, Alabama was arrested after driving into “Brakes 4 Less” in Greenville. Freeman allegedly hit another car, lost control of his own vehicle, and crashed into the business before “then damaging several more cars inside.” Police said the man was transported to a medical facility to be treated for non-life-threatening injuries. Freeman was charged with driving under the influence. (https://fxn.ws/2H0xJpm)

Zac Efron has confirmed that he was rushed to a hospital in Brisbane, Australia, for treatment of a “form of typhoid or similar bacterial infection.” The 32-year-old actor reportedly fell ill while filming his show "Killing Zac Efron" in Papua, New Guinea. The series is scheduled to launch April 6 on the short-form streaming service Quibi.

Apple apologized for the fact that its Siri digital assistant has been listening to people having sex. (https://bit.ly/2HA8hqW)


A South Carolina man told police that his drug dealer made him run naked through the streets because he owed him money.(https://bit.ly/33ZfLgJ)


A Florida man was arrested after he punched a McDonald’s drive-thru worker in the face. The man behind the fast food fracas is looking at two years in prison and a five thousand dollar fine. (https://bit.ly/2PgSl3c)


Taylor Swift says she has security cameras focused on her butt at all times after she was groped at a meet and greet in Colorado. (https://dailym.ai/2KUCrat)

Mewtwo is a clone of the Pokémon Mew, yet it comes before Mew in the Pokédex. Because Mewtwo was in the Pokémon game, but Mew was only acquired through events at the time, Mewtwo was given the number 150, while Mew is number 151.

WEIRD NEWS: Brought to you by WeirdGiftOfTheDay.com
According to police who arrested her on a domestic battery charge, a 24-year-old Florida Woman struck her husband in the head with a thrown Amazon Fire TV Cube during an argument. As alleged in a probable cause affidavit, Ashley Mullineaux and her husband began arguing due to “Ashley not going to church with him.” When 34-year-old Matthew Mullineaux returned post-services to the couple’s Bradenton home, the pair resumed arguing over “Ashley hiding his ‘weed.’” Cops said that the dispute turned physical when Ashley began throwing items at her husband. While some of the domestic projectiles “just broke or spilled throughout the apartment,” two objects hit their mark. An “Alexa cube” and a metal drinking cup both struck Matthew “on his face/head,” leaving him with a cut on his chin and a “large knot” on his head. Ashley was arrested on a misdemeanor battery rap and booked into the county jail. (https://bit.ly/2MeMzwB)

A North Carolina couple awoke just after midnight on Christmas to the sounds of clanking coming from their first floor. In a panic, they hid in a closet and called 911 to report a possible home intrusion. WGHP-TV reports responding Forsyth County deputies searched the home and found a robot vacuum clanking about. Homeowner Thomas Milam says the couple had only had the vacuum for about two days. https://www.wvlt.tv/content/news/NC-couple-calls-911-on-vacuum--566528701.html

Two Miami teens are arrested for peeing in a police car's gas tank after one of the boys was “stuck” in the tank. FAKE NEWS