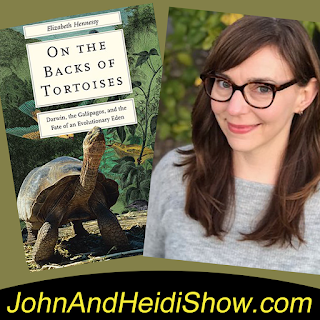 Elizabeth Hennessy, PhD, author of On the Backs of Tortoises: Darwin, the Galápagos, and the Fate of an Evolutionary Eden. An insightful exploration of the iconic Galápagos tortoises, and how their fate is inextricably linked to our own in a rapidly changing world. AVAILABLE NOW - https://amzn.to/38FTBma

A new survey claims that a growing number of wives are bribing their husbands with sex in order to get chores done. (https://bit.ly/2Hx3SoX)
THIS IS YOUR BRAIN ON DRUGS: Brought to you by TimeForRehab.com!
Each day we share stories about people doing dumb things under the influence, but addiction is NO LAUGHING MATTER! If you or someone you know needs help, we're here! You can learn more at TimeForRehab.com.

An employee at Ferry Pass Middle School in Florida was arrested on several drug charges. An arrest report said that 44-year-old Mary Katherine Sams Mundy was pulled over during a traffic stop. Deputies with the Escambia County Sheriff’s Office found numerous bags of what they believed to be narcotics on the floorboard. Court documents said the suspected narcotics tested positive for heroin, cocaine, and methamphetamine. The report added that a backpack was found carrying approximately twenty unopened syringes, along with a silver plastic bag with a small amount of marijuana. Deputies also noted that Mundy’s driver’s license had expired in July. She told deputies that she did have an up-to-date license, but it wasn’t with her at the time. According to Escambia County Deputy Superintendent Norm Ross, Mundy was placed on suspension with pay pending the sheriff's investigation. (https://bit.ly/33wWram)

The women-driven dating app Bumble says it has restored the account of actress Sharon Stone. Her account was blocked after the platform's moderators received several reports of a fake profile. The 62-year-old Stone, who is best-known for starring in the 1992 film “Basic Instinct,” was back up and running after complaining tweeting at Bumble about her block.


SCOOP OF THE DAY: Brought to you by FunkyMonkeyShirts.com
According to a recent study, breastfeeding may lower the risk of stroke for mothers. (https://bit.ly/2Yfiio8)

A video of an American Airlines baggage handler dancing on the runway at the Nashville airport went viral. (https://bit.ly/2YrXEjB)

A Florida woman was arrested after she squeezed her husband’s man parts with so much force that he couldn’t walk. Police say the man showed obvious signs of trauma but the woman still plans to plead not guilty. As crazy as this sounds, they’ve since gotten back together. (https://bit.ly/2YnVwte)

A video of a bear trying to drag away a dumpster from a Colorado marijuana shop went viral. The bear dragged the dumpster ten feet before panicking and running off. (https://nyp.st/2K0zxzy)

A video of a man riding a motorized scooter down a Dallas highway went viral. This, of course, is all kinds of illegal.(https://cbsloc.al/2JQsE4G)

Four people lived in a home for 6 months infested with about 2,000 brown recluse spiders, but none of them were harmed. While the brown recluse is one of three spiders in North America with venom that requires medical treatment, they are hardly ever aggressive.

NEWS HEADLINES.... FROM SOMEWHERE IN THIS WORLD!
Dateline.... Australia The Australian Border Force confiscated one million dollars’ worth of liquid methamphetamines that were stored inside of snow globes. (https://bit.ly/2Gq9mB2)

WEIRD NEWS: Brought to you by WeirdGiftOfTheDay.com
It’s okay to cut loose at a wedding, but when people start losing fingers, it’s time to stop. A bride, groom, and best man were reportedly arrested after a “disturbance” at the wedding reception in Scotland that allegedly included somebody biting off a guest’s finger. So, Claire and Eamonn Goodbrand spent their wedding night in prison. The Scottish Sun reports the incident occurred at The Vu at Ballencrieff Toll in Bathgate. Eamonn’s best man, Kieran Goodbrand, was also taken into custody. Goodbrand reportedly suffered a head injury during the incident. According to the outlet, both men were seen still wearing their dress shoes under their prison uniforms Tuesday when they appeared in court, where neither man entered a plea. The trio was released on bail, under certain conditions including avoiding contact with certain family members. (https://fxn.ws/2YnVGOf)

According to a felony battery complaint, incensed that his girlfriend “bought the wrong food from McDonald’s,” a Florida Man struck the woman “with sweet and sour sauce packets in the head and face area.” Cops say that Jesus Oscar Ferrer Jr. attacked the woman--with whom he has a child--in the couple’s room at a motel in suburban Tampa. The victim told police that Ferrer “became angry” and began arguing with her over the “wrong food” being purchased at McDonald’s. During the dispute, 30-year-old Ferrer allegedly began pelting the woman with plastic containers of McDonald’s “Sweet ‘n Sour” dipping sauce. Ferrer fled the motel, but was subsequently arrested and booked into the Pasco County jail on a felony battery charge. (https://bit.ly/2RNUnWo)
FAKE NEWS.... OR FLORIDA?!
I read a headline and Heidi (and you) need to guess if the story is FAKE NEWS or something that really happened in the state of FLORIDA.

An early New Year reveler was arrested for driving under the influence when Miami police pull him over driving a stolen parade float covered in paper flowers. FAKE NEWS