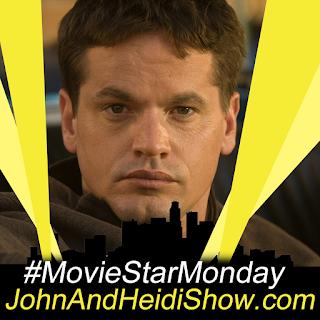 It's another #MovieStarMonday Today we visit with Kevin Downes (Courageous, Mom's Night Out, Faith Of Our Fathers, I Can Only Imaging) about his NEW MOVIE I Still Believe, which is based on an AMAZING TRUE STORY. This movie will be in theaters on 3-13-20. You can see the trailer here. https://www.facebook.com/watch/?v=454587248576990

A Morning Consult Poll found that just 28% of Americans can point out IRAN on a map of the middle east. (https://bit.ly/2QWN6DA)

Police on patrol in the early morning of New Year’s Day had an easy time spotting a drunken driver, because the car was missing both front tires. The Greater Manchester Traffic Police reported that the unidentified motorist was “struggling to drive” and pulled over on a highway outside Bury, United Kingdom. Photos of the vehicle reveal that the tires were completely torn off the rims, which were severely worn by the time the cops stopped it. Police said it was “no surprise” when the driver failed a breathalyzer test, which registered more than five times over the legal limit. The driver was arrested on the scene and was not the first to be caught with this type of violation in recent days. In December, South Yorkshire Police arrested an “incredibly drunk” driver behind the wheel of a car missing one front tire. U.K. law allows drunk drivers to be punished with up to six months in prison, a one-year driving ban and an unlimited fine issued by the court. (https://fxn.ws/2sRY3OD)

“60 Minutes” is now reporting that police have yet to interview the guard who found Jeffrey Epstein in his cell. (https://cbsn.ws/39QXwNM)

The Golden Globes are reportedly bringing back Tina Fey and Amy Poehler to host the 2021 Ceremony. (https://pge.sx/2Fpoga5)

Brad Pitt told the crowd at the New York Cilm Critics Awards that Quentin Tarantino is so talkative that he uses cocaine in order to stop talking.(https://pge.sx/2N8IEQX)

SCOOP OF THE DAY: Brought to you by FunkyMonkeyShirts.com
Prince Harry and Meghan Markle are said to be mulling the idea of giving up their Royal titles and moving to Canada. (https://pge.sx/2Qz5vHy)


Rob Kardashian is fighting for primary custody of Dream Kardashian because he claims his Ex-Fiancee, Blac Chyna, is a risk. (https://pge.sx/2tHF0Xc)


Borden has become the second U.S. Dairy Company to file for bankruptcy in as many months. (https://bit.ly/2ZYSSbF)


Michigan police arrested a cannibal who ate the testicles of a man he met on the gay dating app GRINDR.(https://bit.ly/37LTiVs)


An Ohio school teacher who was convicted of having sex with a 16-year-old boy is asking to be released from prison early. (https://bit.ly/35wtsn5)


Hooters has unveiled a meatless version of their boneless chicken wings and the chain claims its waitresses couldn’t tell the difference during a taste test. (https://bit.ly/2sXmt9n)


High Times Magazine is exploring the possibility of delivering marijuana under their new CEO. (https://bit.ly/3066ke8)
FUN FACT FOR YOU:
Share this with your friends... they'll think you're really smart!

During your lifetime, you will spend around thirty-eight days brushing your teeth. This equals out to about 35.5 days in total. At about two minutes per day, this equates to 0.1% of your life!

WEIRD NEWS: Brought to you by WeirdGiftOfTheDay.com
According to police, a Wichita Falls man was arrested Sunday for choking and headbutting his girlfriend after she stated his fart smelled horrible. Christopher Ragsdale is charged with assault family violence – choking. His bond has not yet been set. On Sunday just before 2:00 p.m., police were called to the house on Cranbrook Lane for a disturbance. When officers arrived, the victim said they were at a friend’s house sitting on the couch. The victim told police that Ragsdale farted and that she told him it smelled horrible. Ragsdale then grabbed the victim by the hair and threw her on the ground. Officers said that Ragsdale then sat on her back and wrapped his arm around her neck and choked her. The girlfriend then called for her friend and told Christopher to get out before going to get her keys. According to the police, once the victim went to the other room, Christopher then yelled at her and headbutted her. (https://bit.ly/37Fivko)

Authorities say that two men in Mississippi wanted to claim a $100,000 lottery prize so bad, they glued the winning numbers onto a losing ticket. 47-year-old Odis Latham and 48-year-old Russell Sparks, both of Columbus, tried to claim the scratch-off winnings at the lottery headquarters in Flowood on Monday. The ticket was immediately determined to have been altered using glue to paste on the winnings numbers to match the prize. The lottery agency called the Flowood Police Department about two adult males allegedly trying to claim the ticket. Latham and Sparks were arrested at the lottery headquarters and have been charged with conspiracy to commit a felony and uttering a counterfeit instrument over $1,000. Latham was also charged with false identification information. Both are being held in the Rankin County jail and are expected to appear in court. (https://fxn.ws/2sLV22v)
FAKE NEWS.... OR FLORIDA?!
I read a headline and Heidi (and you) need to guess if the story is FAKE NEWS or something that really happened in the state of FLORIDA.
A Bradenton man was arrested for impersonating a police officer after he pulled over an undercover cop ….. FAKE NEWS