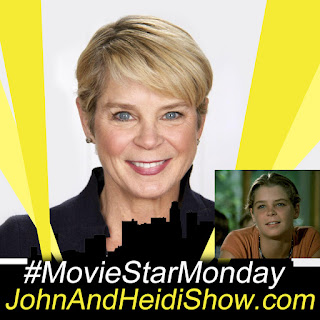 It's another #MovieStarMonday Kristine DeBell. As a young girl, she took ballet and studied voice. At 14, she began modeling for Macy's. During her freshman year of high school, Kristine auditioned for and won the part of Marta in the musical The Sound Of Music. Kristine starred in a number of motion pictures including Meatballs (Bill Murray's first film and Ivan Reitman's directorial debut), Blood Brothers (Richard Gere's first film, directed by Robert Mulligan), and The Big Brawl (Jackie Chan's first American film). Kristine also starred in a number of television pilots throughout the early 1980's, and enjoyed many guest-star appearances in episodic television and movies of the week, including Night Court, and the award-winning soap opera The Young & The Restless.
https://www.imdb.com/name/nm0213374/?ref_=nmbio_bio_nm

A new study found that secondhand screen time can be just as addictive to kids as secondhand smoke. (https://yhoo.it/3aJucsW)

A Florida man, who claims to be a professional mixed martial arts fighter, was arrested for DUI despite offering deputies free classes for a month if they him go. The Brevard County Sheriff's Office said that deputies observed 34-year-old Calen Holcomb driving a white pick-up truck on Monday. They said that he was attempting to back into a parking spot and almost backed into a building. Upon making contact with him, they observed him stumbling and he smelled of alcohol. He also had red, bloodshot, and glossy eyes. Holcomb reportedly refused to complete a field sobriety exercise and test of his breath. He was placed under arrest for driving under the influence. However, during the encounter, deputies said that Holcomb made several statements that he is a trained professional mixed martial arts fighter. He said that if the deputies let him go, he would let them attend a month of his classes for free. He reportedly offered this multiple times while being arrested and transported to jail. (https://bit.ly/30q5Pf3)

Netflix is changing its definition of what constitutes “A VIEW” in the ratings and they now consider two minutes an acceptable amount of time for a video. They used to consider it four minutes, which is the YOUTUBE Model. Now they’re switching to two minutes. (https://on.mktw.net/30ScSgQ)

SCOOP OF THE DAY: Brought to you by FunkyMonkeyShirts.com
A photographer in Birmingham, England captured a cloud image that’s said to resemble Jesus Christ. (https://bit.ly/2RsZ9bK)


A Chinese theme park is under fire for making a pig jump off a 100-foot bungie platform as part of a stunt show.(https://bbc.in/30C2x8o)


A survey by Mattress Firm found that the average American is only sleeping five and a half hours per night. (https://bit.ly/2vbFJRp)


Princess Cruise Lines set sail on a 111 day cruise that left New York on Monday. The trip had a starting price of $22,000 per person. (https://bit.ly/2upEJZl)


A new facial recognition app will allow strangers to find out your name and address just by snapping a picture of you on the street. The app is called CLEARVIEW A.I. (https://cnet.co/2GcWL3I)


A goat was born with a human face and Indian Villagers are worshipping it as an avatar of God. (https://bit.ly/30FMczG)

The healthiest place in the world is in Panama. A small valley near Volcán in Panama has garnered the distinction of being the world's healthiest place to live, according to a 2018 report by International Living. Called Shangri-La Valley, the area is home to beautiful scenery, a low cost of living, and a significantly longer life expectancy than the surrounding areas. All in all, the world's healthiest areas have some common factors, according to the ranking: a warm climate, an active social scene, healthy food, and a slower pace of life that makes for less daily stress.


NEWS HEADLINES.... FROM SOMEWHERE IN THIS WORLD!
Dateline.... FranceFrench Designer Jean-Paul Gaultier shocked the Fashion World by announcing that he’s retiring after fifty years in the business. (https://yhoo.it/2v4AzXo)

WEIRD NEWS: Brought to you by WeirdGiftOfTheDay.com
A Florida Woman is facing an assault charge after throwing a Bible at her boyfriend’s head, according to police who say the victim “had to duck to avoid being hit with the Holy Book.” During an argument in the St. Petersburg home she shares with the man, Terry Slaughter “picked up a Bible and threw it at the victim, almost striking him in the head.” Cops say the man “was in fear of being hit in the head with the Bible, and had to duck to avoid being hit with the Holy Book.” Slaughter denied throwing the Bible, claiming that the victim was “making this up to get her in trouble.” Charged with assault and criminal mischief, both misdemeanors, Slaughter was booked into the county jail and released on her own recognizance. She was ordered by a judge to have no contact with the victim. Slaughter, however, returned to her residence and “confronted” the victim. During an ensuing argument, she allegedly “scratched the victim’s neck, causing a visible injury.” Slaughter was arrested for domestic battery and booked into the county jail yet again. (https://bit.ly/36kDKaa)

According to police, a parent upset about a referee’s calls during a middle-school girls basketball game went on to the court and headbutted the official. The parent has not been charged, but the St. Paris police department says it is working with the Champaign County prosecutor’s office on possible charges. The game was being played at Graham Middle School, with the visiting team from Troy. The suspect is a parent of a Graham player. Police and the referee who reportedly was head-butted say parents in the stands were upset because of calls made during the game. The referee, Doug Thompson, tells WHIO the situation escalated during the second half. Thompson says the parent shouted an obscenity at him during a timeout and also flashed a middle finger. It was then he accuses the parent of headbutting him, causing minor injuries. (https://bit.ly/2RDuUPy)