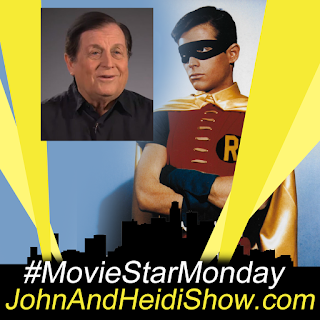 It's another #MovieStarMonday Today we visit with Burt Ward, he played Robin on the Batman television series. He will be honored with the 2,683rd star on the Hollywood Walk of Fame at 6764 Hollywood Boulevard in front of The Guinness World of Records Museum on Thursday, January 9, 2020 at 11:30 A.M. PDT The event will be live-streamed exclusively on www.walkoffame.com

Outside of his time as a “Caped Crusader”, Burt and his wife Tracy have made names for themselves as “Canine Crusaders” in founding Gentle Giants Rescue and Adoptions. www.GentleGiantsDogFood.com

A study by UC Berkeley finds that deep sleep will rewire the brain to eliminate anxiety. (https://bit.ly/2uapXpq)
THIS IS YOUR BRAIN ON DRUGS: Brought to you by TimeForRehab.com!
Each day we share stories about people doing dumb things under the influence, but addiction is NO LAUGHING MATTER! If you or someone you know needs help, we're here! You can learn more at TimeForRehab.com.

When deputies got Hunter Thomas Bleich booked into the Naples Jail Center, they said he began punching a concrete wall. According to an arrest report reviewed by the Miami Herald, it wasn’t his first punch of the night. Deputies said gas pumps first caught the brunt of his fists, followed by equipment inside of a drive-thru car wash. By the time deputies arrived at the Mobil gas station on the evening of Dec. 21, Bleich had allegedly already thrown hands at a nearby tree. They found him sitting on a curb smoking a cigarette outside his car with the doors open. Inside the car, they found his girlfriend, Destinee Fernandez. Deputies said Bleich claimed he had gotten into a heated argument with Fernandez that caused him so much anger, he took it out on the pumps, car wash and tree. Investigators said Bleich’s breath reeked of alcohol. He allegedly told them he and Fernandez had been drinking at a Christmas party earlier in the evening. https://www.wvlt.tv/content/news/Deputies-Florida-man-punches-gas-pumps-car-wash-tree-after-argument-with-girlfriend-566548461.html

Eddie Murphy’s return to “Saturday Night Live” hit an eleven year ratings high for the show, bringing in sixteen million viewers. Murphy’s total viewership was 16.3 million. The last host to hit that was Sarah Palin, who beat him in 2008 with 16.8 million viewers. (https://bit.ly/2QdYkEo)


SCOOP OF THE DAY: Brought to you by FunkyMonkeyShirts.com
“50 Shades of Grey” was the top selling book of the decade with over fifteen million copies sold. The report says it was also the most shoplifted book of the decade. (https://bit.ly/2FczQVF)

Princess Beatrice’s upcoming wedding is expected to be a scaled down affair because of the ongoing scandal surrounding her father, Prince Andrew. There won’t be a lot of British Royals. (https://pge.sx/2Fkwi3H)

A video of Pope Francis slapping away a woman after she pulled him towards her at the Vatican has gone viral . (https://bit.ly/39w4Myg)

NEWS HEADLINES.... FROM SOMEWHERE IN THIS WORLD!
Dateline....A growing number of archaeologists believe that Amazon women who fought against Hercules in Greek Mythology did exist in real life. (https://bit.ly/37px3EP)

WEIRD NEWS: Brought to you by WeirdGiftOfTheDay.com
Two Burger King employees were attacked by a Grubhub deliveryman who “became agitated when informed that his order was not ready for pick up.” Investigators say that 43-year-old Daniel Delellis arrived at a Burger King in Clearwater around 5:20 p.m. Saturday to “pick up an order” for Grubhub, the online food ordering business. But when told he would have to wait for the order, Delellis allegedly walked outside and picked up a “three foot in height hard plastic ash tray” and swung it at the restaurant’s front doors. Delellis then struck a male employee in the chest with the ash tray. According to cops, when a 20-year-old female worker told Delellis that he had to leave the property, Delellis allegedly “swung his left hand and struck the victim on the right cheek leaving a red mark.” Delellis was subsequently arrested by police on a pair of misdemeanor battery counts. He is being held in the county jail in lieu of $1,000 bond, and a judge has ordered him to stay away from the Burger King and have no contact with the two victims. (https://bit.ly/2tgbEPs)

There has been another casualty in the War on Christmas. An Ohio woman is behind bars after allegedly repeatedly punching a female victim who made the mistake of wishing the assailant a “Merry Christmas.” According to police, 32-year-old Henrietta Bush pummeled the victim in the head during the December 25th attack in Avondale, a Cincinnati neighborhood. Court filings do not address the relationship, if any, between Bush and the victim, Rhonda Lewis, who suffered “visible physical harm” as a result of the attack. Bush was arrested on a misdemeanor assault charge and booked into the Hamilton County jail, where she remains locked up in lieu of $10,000 bond. Bush is scheduled for a January 9th appearance in Municipal Court. (https://bit.ly/2QBoksw)
FAKE NEWS.... OR FLORIDA?!
I read a headline and Heidi (and you) need to guess if the story is FAKE NEWS or something that really happened in the state of FLORIDA.

Nine drunken men in Jacksonville, Florida were arrested for picking up a police car and turning it sideways in a parking spot between two news vehicles. – FAKE NEWS