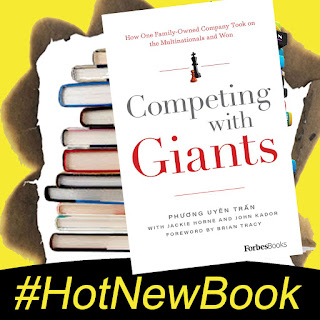 Could Your Family Business Turn Down $2.5 billion? This One Did.
Phuong Uyen Tran was stunned as she watched Coca Cola executives get into an elevator after her father had turned down a $2.5 billion offer to partner with her father’s Southeast Asia beverage business Tan Hiep Phat (THP). She tells the tale and explains why this was the right decision in her new book Competing with Giants. - https://amzn.to/2tYD7pB

A study confirms that a second child wreaks havoc on your mental health. Researchers surveyed 20,000 Australians over the course of 16 years, and found that second children “increase time pressure” and “deteriorate parents’ mental health”.

A Florida man attempted a “not so great escape” last week when he tried hiding from deputies underwater in a pond – an “action movie” stunt that officials easily foiled when he came up for air. The Suwanee County Sheriff’s Office explained on Facebook that 36-year-old Daniel Christopher Booth had warrants out for his arrest in Baker County for selling methamphetamine. When a deputy attempted to arrest Booth at his job at a solar power plant, the 36-year-old ran away and dove into a pond. “Now we can only assume that Mr. Booth has seen one too many action movies and thought he could hide from the K9 teams, from Suwannee CI and Mayo CI by hiding under the water in a pond,” the post read. Deputies quickly spotted Booth when he came to the surface for air and made the arrest. Booth was transported “soaking wet” to the Suwanee County Jail, the sheriff’s office said, adding several comical hashtags, including “#NotRambo.” (https://fxn.ws/2G9DlNp)

Dolittle is shaping up to be a costly movie for Universal Pictures — a studio still reeling from the calamitous Cats. Because of its $175 million price tag, it’s expected that Dolittle will end up losing around $100 million for Universal.


USA Today has picked what it believes are the best and worst Super Bowls — and has ranked every other game as well. At the top is Super Bowl 51, in which the New England Patriots came back from a 25 point deficit to beat the Atlanta Falcons. The Patriots’ comeback is the largest in Super Bowl history and was the first to be decided in overtime.
https://www.usatoday.com/story/sports/nfl/super-bowl/2020/01/21/super-bowl-ranking-every-game-best-worst-niners-chiefs/4525522002/

SCOOP OF THE DAY: Brought to you by FunkyMonkeyShirts.com
Planters announced that their iconic mascot Mr. Peanut has died at the age of 104. He’s going to get killed off in a Super Bowl Commercial in which he’s driving Wesley Snipes to the store. (https://bit.ly/2upFn9m)


In a Super Bowl-related stunt, Burger King has replaced the "Flame grilling since 1954” signs on four of its Miami restaurants to read Flame Grilling Since 19LIV, since this is Super Bowl LIV.


There’s nothing that says “I love you” more than a face full of heart-shaped glitter on Valentine’s Day. A company called Pranks Anonymous now offers a glitter bomb, which consists of heart-shaped glitter flying everywhere and creating a mess of sparkles. Arriving as an unmarked tube, your crush will be clueless as to what’s inside. AVAILABE HERE


A runaway horse was found running on a busy main road in Cardiff, Wales. Police were called, but they were unsure what to do because a horse trailer wasn’t immediately available. Passers-by came to the rescue and calmed the horse down enough that it “happily trotted” onto a bus using a disabled ramp.


An Australian woman shared on Twitter: “I walked into my office and thought that someone must have broken in because it looked trashed.” Turns out the culprit was a little Australian possum, found hiding behind the woman’s computer and looking a little bit lost. The woman gave him some water and asked for help from a wildlife rescue group. The rescue team brought a little possum box and fresh fruit and waited for him to decide to go into the box so he could be relocated.

Pringles aren't actually potato chips. The next time you see a can of Pringles, take a closer look—you won't see the word "chip" anywhere on the packaging. That's because Pringles aren't made of thinly-sliced potatoes, but instead dehydrated potato flakes pressed into their signature parabolic shape. That's what makes them less greasy. But when other potato chip manufacturers complained, the Food and Drug Administration ruled that Pringles couldn't be marketed as chips. The company eventually settled on "potato crisp."


NEWS HEADLINES.... FROM SOMEWHERE IN THIS WORLD!
Dateline....Germany

A guy in Germany tried to rob a store using a chainsaw. But the chainsaw had no gas so employees were able to resist and take it away from the robber.


WEIRD NEWS: Brought to you by WeirdGiftOfTheDay.com
A sheriff’s deputy had to deploy a taser on his own K-9 officer after it bit a cow while on a burglary call. Deputies responded to a report of a burglary in progress on Drivers Lane in the Pleasant Hill community around 4 p.m. The first deputy on scene secured the location with his K-9 and waited on additional officers to assist with entering the residence. A cow nearby distracted the dog, and he subsequently bit the cow, according to the Georgetown County Sheriff’s Office. In an attempt to protect the cow from injuries, the deputy tased the K-9, according to the report. The dog was taken into leash control and returned to the deputy’s vehicle. Reacting to the dog, the cow struck the deputy and property owner. Their injuries were determined to be minor. The original burglary call proved to be unfounded.https://www.wate.com/news/k-9-bites-cow-s-carolina-deputy-tases-k-9-cow-kicks-deputy/

A bank robber put a pillowcase over his head to hide his identity – then had to take it off because he couldn’t see. Matthew Davies stormed into the Bank of Scotland branch in Dunfermline, Fife, armed with a meat cleaver last September. The 47-year-old pulled the weapon from a pillowcase before putting the bedding item over his head. But the High Court in Glasgow was told Davies had to quickly to remove it because he hadn’t created eye holes. Davies, from Dunfermline, still managed to get his hands on almost £2,000 – before sauntering off and then petting a dog. He was caught after a brave customer from the bank followed him home then called police. Davies pleaded guilty to assault and robbery and will be sentenced next month. (https://bit.ly/37cpHVp)
FAKE NEWS.... OR FLORIDA?!
I read a headline and Heidi (and you) need to guess if the story is FAKE NEWS or something that really happened in the state of FLORIDA.