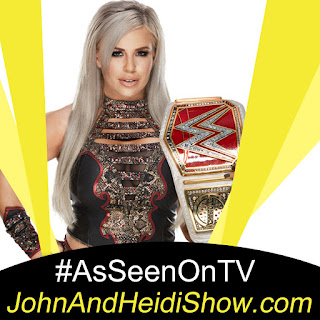 Ashley Mae Sebera best known as ‘Dana Brooke’. ...a professional wrestler signed with WWE. She can currently be seen on “WWE MAIN EVENT," '"WWE RAW", and the newly released WWE The Shield's Final Chapter TV movie. After 18 years of gymnastics, Ashley suffered a severe injury to both her ankles. She overcame this obstacle by turning to a career in bodybuilding, which in 2013, landed her a spot on the WWE network.

Aside from being ‘Dana Brooke’, Ashley has a love for design. In 2011 she graduated with a degree in fashion merchandising, design and a minor degree in business administration from Kent State University. Ashley is actively involved in philanthropy with having started her own non-profit called the Dallas McCarver Foundation, which helps raise money for underprivileged children.
https://www.gofundme.com/f/dallas-mccarver

A survey by Bambee found that 60% of workers are too intimidated to tell their bosses about their problems. (https://bit.ly/3cP3GPG)

THIS IS YOUR BRAIN ON DRUGS: Brought to you by TimeForRehab.com!
Each day we share stories about people doing dumb things under the influence, but ADDICTION IS NO LAUGHING MATTER! If you or someone you know needs help, we're here! Learn more at TimeForRehab.com.
An intoxicated Indiana man allegedly became upset with a karaoke song in a bar and attempted to “go after” the singer. 34-year-old Jason Allen Huff of Portage was charged with intimidation where defendant draws or uses a deadly weapon, a level 5 felony. At 12:09 a.m. last Wednesday police responded to a report of a man threatening people with a firearm at Leroy’s Hot Stuff Bar. When police arrived, an employee pointed to a car in the parking lot where Huff and a woman were sitting. The officer drew his firearm and ordered the two to get out of the vehicle and onto the ground. He saw the woman was holding a gun, which was taken by a Burns Harbor officer. As the officer gave repeated commands to get out of the vehicle, Huff just stared at him and appeared to be extremely intoxicated. After he was detained, police questioned the staff, who said it began with a karaoke song. At one point, Huff became upset with a karaoke singer’s song choice and got up and “attempted to go after the singer but ended up falling down.” Huff then allegedly began waving around a black 9 mm Glock 19 he pulled from his waistband. (https://bit.ly/335oAFG)

The film version of “Cats” won the most categories at the annual “Razzie Awards,” which give out awards to the worst movies. (https://bit.ly/2TYUPnl)

The first teaser has been released for Stephen Spielberg’s version of “Westside Story.” It takes place in the modern era. (https://bit.ly/2TZs6hW)

HBO’s The Plot Against America is getting good reviews.

A 25-year-old man in the Nashville area was charged with driving under the influence when officers found him sleeping in his car — at an intersection.

A survey by Slumber Cloud found that 62% of Americans would not date someone who had a favorite sleep situation that was different than theirs.
(https://bit.ly/2Ub7CSj)

FUN FACT FOR YOU:Share this with your friends... they'll think you're really smart!
Pigs are constitutionally protected in Florida. First written in 1838, the Constitution of the state of Florida guarantees the right to privacy, the freedom of speech, and the right of pregnant pigs to be free from cages. Unlike many crazy or outdated laws, this amendment is recent (passed in 2002) and comes from a well-meaning place: the prevention of cruelty to animals. During pregnancy, a pig must not be caged or even tethered such that it can't turn around freely.

Dateline.... ISRAEL
An Israeli thief returned a 2,000 year old catapult stone in order to clear his conscience before “the end of the world.” (https://bit.ly/2x0tesW)

A South Dakota man faces federal charges that he ran a multi-million-dollar cattle Ponzi scheme. A federal grand jury earlier this month indicted 58-year-old Robert Blom of Corsica on charges of wire fraud, mail fraud, and money laundering. Blom pleaded not guilty to the indictment Monday. The indictment alleges that around January 2014 and continuing through February 2019, Blom devised a scheme to defraud investors. As part of his custom cattle-feeding business, Blom solicited investors for groups of cattle. After the cattle were sold, Blom paid profits to investors. But prosecutors allege Blom sold the same groups of cattle to different investors. So far, the loss is estimated at about $20 million. (https://bit.ly/39U9RjE)

The Newport Oregon Police Department is notifying the public that they are not to call the emergency line simply because they ran out of toilet paper. While many people have been blitzing shopping areas in order to stock up on toilet paper, the NPD offers a number of alternative options that you can use in case you run out. In a recent Facebook post, they stated “It’s hard to believe that we even have to post this. Do not call 9-1-1 just because you ran out of toilet paper. You will survive without our assistance. In fact, history offers many other options for you in your time of need if you cannot find a roll of your favorite soft, ultra-plush two-ply citrus scented tissue.” “Seamen used old rope and anchor lines soaked in salt water. Ancient Romans used a sea sponge on a stick, also soaked in salt water. We are a coastal town. We have an abundance of salt water available. Sea shells were also used.” (https://bit.ly/3d3qFGW)

FAKE NEWS.... OR FLORIDA?!
I read a headline and Heidi (and you) need to guess if the story is FAKE NEWS or something that really happened in the state of FLORIDA.
A Brooksville man was arrested for assaulting a woman with pancake batter inside her house ….. FLORIDA (https://goo.gl/voALi1)
GOOD NEWS: Brought to you by BetterCreditCards.com