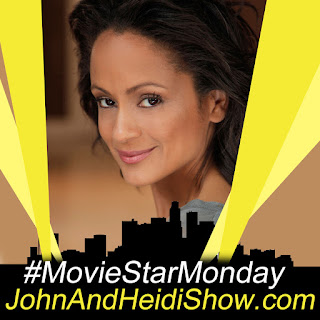 It's another #MovieStarMonday... this time with Anne-Marie Johnson from one of Heidi's FAVORITE movies “I'm Gonna Get You Sucka” and also from a bunch of highly rated TV shows like “In The Heat Of The Night”, “Days Of Our Lives”, “JAG”, “That's So Raven”, “Melrose Place” and many more. She is now starring in “Cherish The Day” on OWN TV. http://www.oprah.com/app/cherish-the-day.html

A group of MIT scientists have created an artificial intelligence system that can handle asteroids on a collision course with our planet. (https://dailym.ai/2PlpgRH)

THIS IS YOUR BRAIN ON DRUGS: Brought to you by TimeForRehab.com!
Each day we share stories about people doing dumb things under the influence, but ADDICTION IS NO LAUGHING MATTER! If you or someone you know needs help, we're here! Learn more at TimeForRehab.com.
According to police, Police in Alabama were left shaking their heads Friday morning after a wild, multi-state car chase led to arrest of an accused car thief wearing a “DUMBASS” sweatshirt. “One of the males was wearing this sweatshirt,” the Oxford Police Department posted on Facebook of the two men taken into custody, along with a photo of the prophetic garment. “Maybe he should’ve took his own advice this morning,” the post quipped. Cops began chasing the stolen white Mazda at around 9:30 a.m. in Haralson County, Georgia. The alleged thieves later crossed state lines into Alabama, continuing on U.S. Highway 78 into Oxford, where the Mazda crashed into a store. Both men were arrested at a local Wendy’s, and face drug charges and charges of receiving stolen property. (https://bit.ly/2P05WcM)

NETFLIX is going to rank the popularity of its shows in a push towards transparency after being criticized for not releasing ratings. (https://yhoo.it/32oFXkL)

The late Kirk Douglas left most of his $80 million dollar fortune to charity.
(https://pge.sx/2wMwFmZ)

A North Carolina TV reporter accidentally turned on Facebook Live and reported on a snowfall completely oblivious to the fact that he was being portrayed with googly eyes, in dog ears, and as a wizard. (https://bit.ly/2Tjdp8d)

Amazon opened a cashier-less supermarket in Seattle Tuesday in an attempt to speed up the check out process. (https://on.wsj.com/391Jsjk)

According to a study, two-thirds of all smokers will die as a direct result of smoking.

More and more older Americans are using marijuana and other cannabis-based products. In research published Monday (in JAMA Internal Medicine), the number of U.S. adults over 65 who reported using cannabis nearly doubled over a three-year period, from 2.4 percent in 2015 to 4.2 percent in 2018.

A trail runner in Washington state who broke his leg knew he was doomed if he tried to wait for help. So Joe Oldendorf crawled for eleven hours. This was after he’d already run twelve miles. Eventually, the Coast Guard found him and airlifted him to a hospital.

Nutmeg can be fatally poisonous. A little dash of nutmeg in a pumpkin pie or on your egg nog can give it some extra flavor and a lovely spicy scent. Too much nutmeg, however, can be toxic. Two to three teaspoons of raw nutmeg can induce hallucinations, convulsions, pain, nausea, and paranoia that can last for several days. Actual fatalities are rare, but they have happened.

An Alaska-based airman was punished last week for reportedly peeing in an office coffee maker. The incident was reported in a newsletter written by the legal office of the Anchorage Joint Base Elmendorf-Richardson on February 13th, although many of the details remained a mystery. According to the newsletter, the Airman First Class violated two articles -- one being Article 92, dereliction of duty, “for failure to refrain from urinating in the office coffee maker.” The airman also allegedly violated Article 86, absence without leave, for five days away from duty. Due to his actions, the airman received a reduction to Airman Basic -- the lowest enlisted rank in the United States Air Force (USAF). The airman also received a reprimand, although it was not clear what that entailed, according to Task & Purpose, a military-focused website.
(https://fxn.ws/2SWsGwJ)

MOMENT OF DUH: Brought to you by SingleStudentLoan.com
A Manatee County, Florida man was arrested after threatening his neighbors with an AR-15 rifle after finding tire ruts in his yard. 66-year-old Michael Boston became infuriated when he saw his yard defaced and — despite no evidence — blamed his neighbor. According to local ABC affiliate, WWSB, Boston picked a fight with the neighbor and “began yelling that he was going to ‘shoot that motherf–ker,” before going to get his rifle. Another neighbor, who saw Boston approach the home with the gun, called the police and Boston was arrested and charged with aggravated assault with a deadly weapon without intent to kill.
(https://bit.ly/2vVFoCT)

FAKE NEWS.... OR FLORIDA?!
I read a headline and Heidi (and you) need to guess if the story is FAKE NEWS or something that really happened in the state of FLORIDA.
A Pasco County man was arrested for auto-theft after he broke into an unmarked police car with two deputies inside it ….. FLORIDA (https://bit.ly/2GZ4a9p)
GOOD NEWS: Brought to you by BetterCreditCards.com