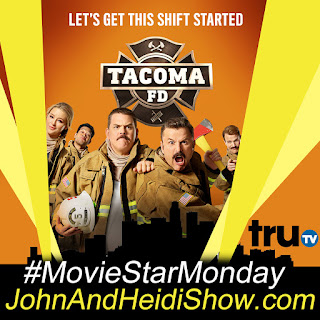 This #MovieStarMonday we visit with TWO stars! Steve Lemme and Kevin Heffernan from Super Troopers and Super Troopers 2, which doubled box office predictions and has grossed an estimated $100+ million in DVD/on demand sales (we are asking about Super Troopers 3 as well). They co-created and star in the TruTV comedy, Tacoma FD, which premied season 2 on Thursday, March 26th. https://www.trutv.com/shows/tacoma-fd

THIS IS YOUR BRAIN ON DRUGS: Brought to you by TimeForRehab.com!
Each day we share stories about people doing dumb things under the influence, but ADDICTION IS NO LAUGHING MATTER! If you or someone you know needs help, we're here! Learn more at TimeForRehab.com.
According to an arrest report, a Florida man was caught using the stolen credit card of a dead man and was then seen trying to eat the card to destroy evidence before he was questioned by deputies. Orange County deputies said they were called to Disney Springs Monday for the report of a man trying to purchase jewelry and gift cards with a fraudulent debit card. When they arrived, deputies said they 27-year-old saw Jose Herrera detained by Disney security, making strange movements with his hand inside his pocket. Upon investigation, deputies said they found a baggie of a white powdery substance in Herrera’s pocket. When questioned about the contents of the baggie, Herrera was up front with deputies: “I’m not going to lie, it’s cocaine,” he said. Other law enforcement who witnessed the incident told deputies they saw Herrera try to eat the fraudulent card in an attempt to destroy the evidence before he could be questioned. He is charged with fraud of a person who is deceased, possession of cocaine, and possession of a stolen credit card. (https://bit.ly/3aL7obl)

Bond Girl Olga Kurylenko said she has completely recovered from the Coronavirus after testing positive earlier this month. (https://pge.sx/2QCqAQL)

Tom Hanks says he’s feeling better two weeks after his Coronavirus diagnosis. Hanks was in Australia filming an Elvis movie at the time he got it.
(https://pge.sx/3aglgua)

The nation’s divorce lawyers are warning that divorce rates are skyrocketing for quarantined couples. (https://pge.sx/3dqqBkK)

The City of Las Vegas is struggling to stay afloat during the Coronavirus shutdown. (https://bit.ly/3biQdhE)

A video of a Missouri man licking deodorant at a Wal Mart and saying “Who’s afraid of Coronavirus?!” has gone viral. (https://bit.ly/3dtUr7Z)

A video of two Indian Airline Pilots jumping out of their plane when a passenger sneezed on the runway has gone viral. (https://bit.ly/3brzZ5Y)

Prince Charles has tested positive for the Coronavirus and is said to be self-isolating with mild symptoms. (https://pge.sx/2xleAN4)

The United States has shut down its first website for spreading fraudulent information about the Coronavirus. The site was called Coronavirus-Medical-Kit-Dot-Com and it was giving away Coronavirus vaccinations to anyone who paid $4.95 in shipping and handling. (https://yhoo.it/3bpPeMI)

The Coronavirus has fueled a cancellation in milestone celebrations such as weddings, proms, and retirement parties. (https://on.wsj.com/2WFvOzb)

A Kentucky couple flipped out on a Kroger Cashier who refused to sell them 522 cans of Mountain Dew. At one point, the guy threatened to bite the cashier.
(https://bit.ly/2Jf08IW)

Michael Levitt, a Stanford Biophysicist and Nobel Prize Winner, has analyzed the data on Coronavirus deaths and says our country is going to be fine a lot sooner than anyone realizes. (https://yhoo.it/2vHUdsL)

FUN FACT FOR YOU:Share this with your friends... they'll think you're really smart!
The Bermuda Triangle isn't any more likely to cause a mysterious disappearance than anywhere else. This area in the North Atlantic Sea is also called "The Devil's Triangle" because it is an area of the ocean that stretches between the tip of Florida, Bermuda, and Puerto Rico. It has been thought to seemingly swallow up ships and aircrafts. Explorers as far back as Christopher Columbus have reported odd occurrences, like fireballs in the sky (that turned out to be a meteor crashing). But historians, scientists, and the U.S. Coast Guard have proven that vessels are no more likely to disappear in the Bermuda Triangle than they are anywhere else in the ocean. Many prior disappearances have been demystified as remains of numerous wrecks were discovered or explained by weather patterns in the area at that time.

Dateline.... FRANCE
A Frenchman ran a full twenty-six mile marathon while jogging in place on his balcony. (https://bit.ly/2xg9K3F)

Like any good Florida story, this one begins with a naked couple brawling inside a car parked at the mall. Late Sunday evening, cops responded to the Clearwater Mall after receiving a report about a fight in progress. Witnesses told officers that after hearing a woman screaming “within the parking lot,” they discovered “the two naked within the car and wrestling with each other.” Cops separated the couple, identified in an arrest affidavit as Robert Janisch, a 21-year-old Minnesota resident, and his girlfriend of six months. They both reportedly “admitted to drinking alcohol today.” During police questioning, the pair each said that a physical confrontation occurred after they finished having sex inside the vehicle. The woman said after she had intercourse with Janisch in their car, she had to urinate. She did so outside of the car, and that is when the trouble began. After she wiped herself, she accidentally threw the napkin on Janisch. He then freaked out and started choking her for several seconds. He was arrested for domestic battery by strangulation and booked into the county jail.(https://bit.ly/2WKEPHc)

A Florida man got naked from the waist down and made lewd gestures at an underage girl after he crashed into the car she was in, according to the Manatee County Sheriff’s Office. Deputies said 23-year-old Cody Hicks was driving erratically Friday and crashed into a car with two females inside. After the crash, Hicks pulled down his pants and underwear while standing in the middle of the street and began touching his penis while sticking his tongue out at witnesses. Hicks is also accused of asking the underage victim if she wanted to participate in a sex act while he had his penis exposed. Deputies said Hicks refused to cooperate with the investigation and would only answer with, “I want my lawyer" when he was asked a question. He was arrested on a lewd and lascivious exhibition charge and reportedly plead not guilty. (https://bit.ly/2QBYllf)


FAKE NEWS.... OR FLORIDA?!
I read a headline and Heidi (and you) need to guess if the story is FAKE NEWS or something that really happened in the state of FLORIDA.
A Titusville Grandma took her teeth out to scare an intruder off her porch ….. FLORIDA (https://at.wftv.com/2xWwIJx)
GOOD NEWS: Brought to you by BetterCreditCards.com

78 Elephants In Thailand Have Been Permanently Set Free From Carrying Tourists Because Of COVID-19
https://www.sunnyskyz.com/good-news/3712/78-Elephants-In-Thailand-Have-Been-Permanently-Set-Free-From-Carrying-Tourists-Because-Of-COVID-19
Newer Post Older Post Home