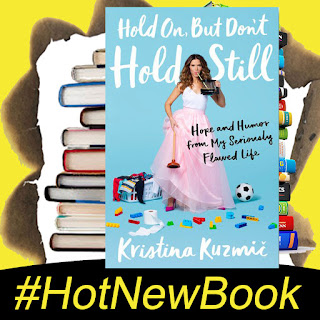 We talk with Parenting Expert and mommy blogger Kristina Kuzmic about her new book Hold On... but Don't Hold Still - https://amzn.to/38oRd1H

This Spring, Kristina will be taking her HOPE AND HUMOR TOUR back on the road with the launching of a book/comedy tour in conjunction with the book release. She will be performing and bringing hope AND so much humor and inspiration to her millions of fans. Her hysterical and authentic take on women and family, cooking, friendships, self-image and empowerment are so necessary in today’s climate. She is a huge influencer and Vlogger with over 900 million views with videos covering every topic appealing to so many demographics. Getting recognition from everyone from Ashton Kutcher to Oprah Winfrey who had her on to discuss the importance of what cooking does for the soul-- she truly is someone that leaves people feeling loved and inspired.

A new survey found that 3 in 4 parents think they’re better parents than their own parents.(https://bit.ly/2uzSoNZ)

THIS IS YOUR BRAIN ON DRUGS: Brought to you by TimeForRehab.com!
Each day we share stories about people doing dumb things under the influence, but ADDICTION IS NO LAUGHING MATTER! If you or someone you know needs help, we're here! Learn more at TimeForRehab.com.
A Florida woman is accused of running over her boyfriend with a golf cart after a day of bar-hopping on Pine Island. Lee County Sheriff's Office arrested 37-year-old Melony Giese-Michalski after the couple got into a fight Saturday at Ragged Ass Saloon. When deputies found the victim, he had road rash and looked like his shoulder was dislocated. Michalski denied knowing how it happened. The victim was taken to Lee Memorial Hospital, but he will be okay. Giese-Michalski was arrested for aggravated battery. The victim told deputies this is not their first domestic problem and he plans on pressing charges. (https://bit.ly/37Ds8Qn)

Jennifer Lopez told Oprah Winfrey she was disappointed that she didn’t get nominated for an Oscar. (https://bit.ly/2uPAcAe)

MSNBC Host Chris Mathews is being accused of inappropriately flirting with a female guest. (https://pge.sx/2whGMjm)

Meghan Markle is reportedly trying to land a role in a Hollywood Blockbuster.
(https://bit.ly/2TsMkzd)

Britney Spears shared a video of the moment her foot broke during rehearsal. (https://fxn.ws/3cdTbVV)

A CNN survey found that 38% of Americans won’t drink Corona Beer because of the virus. (https://bit.ly/2TjmChH)

Sophie Turner told “Elle” Magazine she thought Joe Jonas was a “d—k” before she met him.(https://pge.sx/32R5QK3)

Scientists at the Allen Institute of Artificial Intelligence claim that super computers are on the verge of destroying civilization. (https://bit.ly/32rshp8)

Researchers at The University of Pittsburgh say a woman suffers from a condition that causes her to urinate pure alcohol. (https://bit.ly/2Tk60VX)

The U.S. has signed a Peace Deal with the Taliban, putting an end to our Nation’s longest War. America is poised to pull all of its troops out of Afghanistan. The Taliban is no longer allowed to harbor terrorists in Afghanistan.
(https://bit.ly/2I96bhN)

A prototype of Space X’s new starship super-rocket blew up during a pre-launch pressure test on Friday. (https://bit.ly/39fjRDL)

FUN FACT FOR YOU:Share this with your friends... they'll think you're really smart!
Babies are physical anomalies. Babies, particularly newborns, are surprisingly different from the children they'll grow up to be. When they're born, their heads account for a quarter of their full body weight, and the size of their brains will double in the first year of life. Babies have 300 bones and around 10,000 tastebuds all over their mouth. Some of the bones will fuse as they age (into 206, as an adult), but the tastebuds not on the tongue will eventually vanish.

Dateline.... The VaticanPope Francis implored the faithful to give up insulting people on social media for lent. (https://tmsnrt.rs/2HUm4bQ)

Homeowners used to take pride in repairing and maintaining their homes all by themselves, but a recent survey of 2,000 young British adults finds that many still need assistance with the simplest of tasks — like changing a light bulb! Unbelievably, some respondents even admitted to simply leaving a dead light bulb in place for more than three weeks before finally mustering up the courage to ask for some help. Other simple fixes that respondents said they can’t accomplish alone included putting up wallpaper, draining a radiator, painting, and tightening up a loose cabinet door. Less than 25% of survey participants would call themselves “good” at DIY skills, and 13% (about 1 in 8) flat out said their skills are “poor.” The research, which was commissioned by Plusnet, also noted that a full third of millennials seek out help on the easiest of household chores mostly because they’re sure they’ll mess things up if they attempt it themselves. (https://bit.ly/2PKG0SH)

MOMENT OF DUH: Brought to you by SingleStudentLoan.com
Parents have long fought a losing battle to stop their kids from playing video games for too long, but sometimes the carrot is more effective than the stick. It appears a set of parents in the UK subscribed to that thinking, having allowed their 11-year-old boy to drive their car—a way of stopping him from playing GTA all day, apparently. Police in the Lancaster town of Blackpool stropped a red Vauxhall Astra in a car park in the town center, discovering the minor behind the wheel. "The driver of this car was 11-years-old. Yes, eleven,” tweeted Lancaster Road Police. "A family member was fed up with the child playing Grand Theft Auto all day on the PlayStation, so brought him out to practice driving on a car park in Blackpool… The adult has been reported for traffic offenses.” A recent survey showed that while 86 percent of parents say their kids play games an excessive amount. (https://bit.ly/3apINbM)

FAKE NEWS.... OR FLORIDA?!
I read a headline and Heidi (and you) need to guess if the story is FAKE NEWS or something that really happened in the state of FLORIDA.
Tallahassee police say a house cat started a fire by spilling a glass of whiskey onto a gas stove ….. FAKE NEWS
GOOD NEWS: Brought to you by BetterCreditCards.com