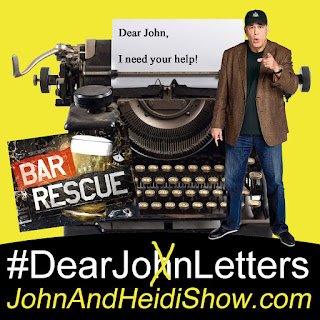 My wife and I put every penny we have into a bar & grill. We're $400,000 in debt and have our house on the line. Sadly we have some members of our team that just won't listen and my wife and I disagree about letting them go. Any advice?

Signed - I Need a Drink!
I CALLED IN THE BIG GUNS FOR THIS ONE!
We have Jon Taffer From Bar Rescue joining us on Thursday's show to help. A new season on Bar Rescue just began on Sunday on Paramount TV.https://www.paramountnetwork.com/shows/bar-rescue

A study by JAMA UROLOGY found that eating a “western diet” of pizza, snacks, and processed food is lowering men’s sex drives.(https://cnn.it/2w0Kiyl)

THIS IS YOUR BRAIN ON DRUGS: Brought to you by TimeForRehab.com!
Each day we share stories about people doing dumb things under the influence, but ADDICTION IS NO LAUGHING MATTER! If you or someone you know needs help, we're here! Learn more at TimeForRehab.com.
A Wisconsin man was arrested for allegedly shooting three kids after they threw several snowballs at his car last month. 24-year-old William Carson is accused of opening fire at a group of seven children who were chucking snowballs at passing vehicles in Milwaukee on January 4th. When one of the frozen snowballs hit Carson’s car, he turned around, got out and started shooting. One child was shot in the thigh, a second was hit in the arm, and another kid’s jacket was grazed by a bullet. Carson fled after the shooting and was caught by police Jan. 12 while driving under the influence. Cops recovered a gun from Carson’s car, which they determine is “highly probable” to be the same firearm used in the January 4th attack. Carson was hit with several charges, including first-degree reckless injury and use of a dangerous weapon.
(https://bit.ly/2HDp5x0)

Hardball host Chris Mathews has resigned from the network after a staffer accused him of harassing her. (https://nbcnews.to/2TCwCBB)

Carrie Underwood claims she ate as little as 800 calories a day after “American Idol.” (https://fxn.ws/2x90luD)

A robbery suspect was in the process of going through a house in Germany when the residents returned. In a rush to escape, the suspect left his wallet and ID at the scene of the crime. Why did the thief have his wallet out? Police say he was attempting to make an online purchase of computer parts for the computer he was about to steal.

While other fast food chains are rushing to launch meatless and plant-based options, Dunkin’ Donuts went in the opposite direction and released the ultimate snack for meat lovers: a bag of bacon.

The world has a new record for speed-eating a burrito. Leah Shutkever of the UK has broken her old burrito-eating record of 44.20 seconds. Shutkever’s new record, just verified by Guinness, is 35.26 seconds. https://www.youtube.com/watch?v=KQoVx_jGPps

There's a country where twins are most likely to be born. Benin, a country in central Africa, is notable for having the highest birth rate of twins in the world. While the world average is just 13 twins per 1,000 births, Benin more than doubles that rate, at nearly 30 twins per 1,000 births. There's no single factor that causes this, but genetics, diet, and even the mother's height are thought to play a role.

A hospital worker at Gulf Coast Hospital in Fort Myers was arrested after being accused of sucking an elderly patient's toes. The patient said they felt their right foot being touched around 11:00 p.m. on Monday. They assumed a nurse was checking for swelling, until they were touched again. Then, the patient felt it happening a third time — this time they felt something wet between their toes. When they looked up, they said they saw 23-year-old Frantz Beldorin on his knees with his head bent over their foot. After yanking their foot away from Beldorin, he returned to his seat in the corner of the room. As a “sitter,” he had been assigned to keep an eye on the patient's roommate who was a flight risk. Later, the patient said Beldorin poked his head around the curtain and asked if they were ok. That's when they called for assistance and told a nurse what had happened. The nurse called security and security called the police, after which Beldorin was arrested at the hospital. (https://bit.ly/3camCrS)

Police in Ohio called to check on a man’s welfare found him mixing coffee creamer with fentanyl to sell as a narcotic. 23-year-old Damon H. Wade was arrested at a business in Alliance where police found him with the coffee creamer. They seized it along with less than a gram of fentanyl, which he had divided into two pieces of folded aluminum. According to the jail records, he also had a strip of buprenorphine and naloxone film in his wallet. Wade, who was wanted on a misdemeanor falsification warrant, was jailed on charges of possession of a fentanyl-related compound, possession of counterfeit controlled substances and misdemeanor drug possession. He remained behind bars Friday, held in lieu of $76,000 bond pending an Alliance Municipal Court hearing.
(https://bit.ly/32HSGz4)

FAKE NEWS.... OR FLORIDA?!
I read a headline and Heidi (and you) need to guess if the story is FAKE NEWS or something that really happened in the state of FLORIDA.
A Holiday man had his monkey taken away after the two of them were busted for driving a stolen car ….. FLORIDA (https://2wsb.tv/2Hdt7Oo)

The internet needs more good old wholesome content, and one 81-year-old man on TikTok is here to give us just that. With simple cooking videos he’s titled “Cooking with Steve,” the TikTok star shows viewers everything from how to make pancakes to pour cereal. Stephen Austin of Fort Worth, Texas, is the man behind the videos posted under the username Old Man Steve.
https://www.foxnews.com/lifestyle/old-man-steve-81-viral-tiktok-cooking-videos